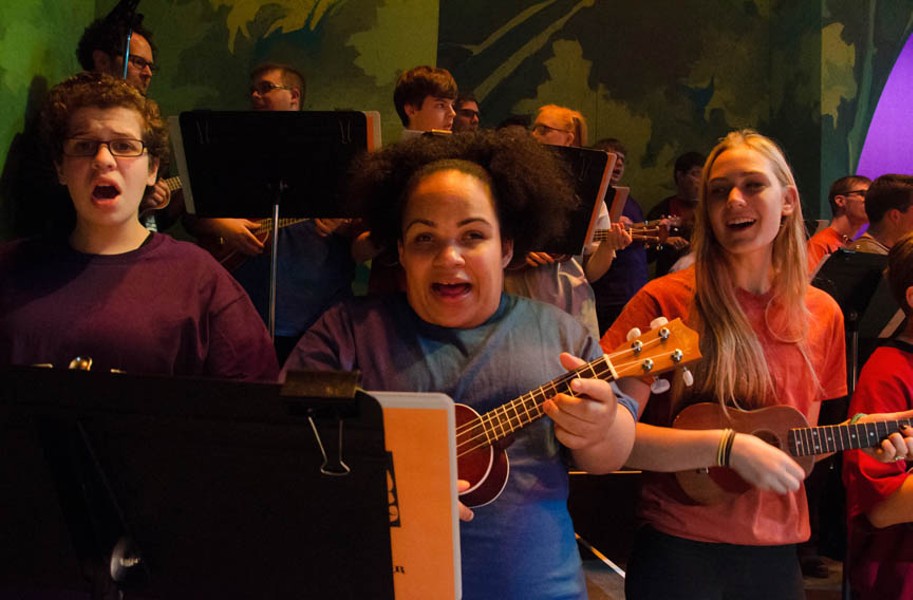 Sara Rosmarin, Tori Pace and Izabela Clarke perform with the ukulele ensemble from “Live Art: Tree of Life” which took place in December 2013.

When she enters a room, Tori Pace has enough confidence and swagger to rival any A-list star. The 19-year-old idolizes Celine Dion, Whitney Houston and Beyoncé, even sometimes referring to herself as “Tori-oncé.”

Like her icons, she’s at her best when able to express herself through song. And when she gets onstage, she sings with undeniable conviction.

But her bravado is the result of a lifelong struggle. When she was young she was diagnosed with Jacobsen syndrome, an extremely rare genetic affliction with only 350 confirmed cases worldwide. Today the number of surgeries Pace has undergone eclipses her age, and she underwent years of physical and speech therapy before she took her first steps onstage or sang her first note.

Between myriad medical procedures, Pace attended public school in Henrico County, where she developed her vocal talent in the chorus. But something was missing.

In December 2013, her mother, Melanie Pace Johnson, enrolled her in the Live Art program at SPARC, the School of the Performing Arts in the Richmond Community. She was drawn by its mission to combine typically developing students and students with special needs in equal numbers to create a unique environment of education, personal appreciation and individual expression.

“Everyone has something to offer that is special,” says Andrew Wisniewski, a 15-year-old typically developing student in Pace’s class. “It’s a glowing energy.”

All of the students’ tuition in the Live Art program is paid by SPARC through donations from people and businesses.

Each year, within the ornate hall of Richmond’s Altria Theater, students in the program collaborate with musical celebrities such as Jason Mraz, K.D. Lang, and Josh Small to put on a glamorous production that showcases individual talents while forming a collective piece of art in front of the audience. Celebrity artists donate their time and all proceeds go to the school’s inclusive programs for the following year.

“It’s a unique animal,” says Erin Thomas-Foley, SPARC’s director of education and outreach. “It’s not exactly a recital, it’s not exactly an art exhibit, and it’s not exactly a rock concert.” The underlying theme of this year’s event is soul, which will involve expressions of individual perspectives on what soul means to art and the community.

Ask Pace which stars she’s performing with on Sunday, and she won’t say Mraz or Sarah Bareilles, who are all slated to collaborate with the students. Instead, she begins by listing the names of her fellow classmates.

Not the least bit nervous, Pace says a quick rendition of her patented Courage Dance before the show should help with stage fright jitters: “I just look in the mirror and I think, ‘Wow,’” she says.

Her mother is overwhelmed with the way her daughter has flourished at SPARC — especially the confidence that her teachers have instilled. She described life before Live Art as artificially constrictive.

“This is our box. This is where we fit,” she says. “You can get cozy in the box, but you feel like you’re only capable of so much. But now, I see changes in Tori and in these kids. There’s magic here.”

After the class takes its final bow and the curtains close, Pace will maintain a full schedule to keep up with her appetite for creativity. She’s constantly writing new songs and poems, and is host of her own YouTube talk show.

She already has ideas for next year’s performance, and is keeping her fingers crossed that she’ll be able to share the stage with Celine Dion and sing her favorite song, “Because You Loved Me.”

“You were my strength when I was weak, you were my voice when I couldn’t speak,” she begins to sing, unprompted. S

“Live Art: Soul” will be held at the Altria Theater on Sunday, June 7, at 6 p.m. sparconline.org. “Tori’s Talk Show” is online at youtube.com/user/talkshowtori.