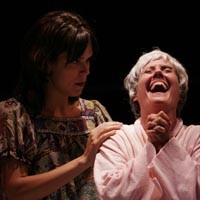 The Richmond premiere of “The Clean House,” at the Barksdale Theatre's Willow Lawn space, is amusing, moving and a little bit magical. Where this last element exactly comes from is elusive: Is it the production's masterful lighting by designer Lynne Hartman? The evocative guitar music that punctuates scene transitions? The script's small touches of magical realism that director Steve Perigard expertly highlights?
Whatever its origin, this air of enchantment so effectively obscures narrative elements that would otherwise be clichAcd or cloying that I found myself alternately laughing and crying throughout the show's final scenes.
“House” is being produced as part of a festival celebrating the work of playwright Sarah Ruhl (her “Eurydice” is playing at the Firehouse) and she's constructed a smart story full of simple dualities.
The Brazilian maid, Matilde (Bianca Bryan), hired by tightly wound surgeon Lane (Kelly Kennedy), has become too sad to clean. Instead of dusting, she idly ruminates on coming up with the world's best joke. Lane's neat-freak sister Virginia (Jan Guarino) intervenes just before the news breaks that Lane's husband (John Moon) is leaving her for his Latin lover, Ana (Robin Arthur), sending shock waves through each of their lives.
In two exceptional performances, Bryan and Guarino share a sweet, supportive chemistry while Matilde becomes the sister to Virginia that Lane never was. Moon and Arthur also genuinely click with a passion and innocence that's refreshing and inspiring in two middle-aged actors. Arthur in particular breathes such vibrancy into Ana she seems less a character than a force of nature.
The only one left out of this party is Kennedy, who's stuck with a character too starchy by half, stalking about her immaculate all-white house (set design by Ron Keller) decked out in all white (costumes by Sue Griffin). The script slides too close to farce at times with a final conceit stolen from an old Monty Python sketch. These bumps threaten to stall the show, but with Perigard's light touch and a top-notch cast at work, “House” ultimately soars.

A cast of 15 may populate Henley Street Theatre Company's “Richard III,” but this production belongs to one actor, Scott Wichmann, who embodies the scheming, murderous titular character with blistering zeal.
The versatile Wichmann has made a name for himself playing dozens of roles in one-man shows so it's no surprise that his Richard can snap from insistent wooer to cold-hearted killer in an instant. Still, he delivers the kind of bracing performance that true theater-lovers should risk speeding tickets rushing out to see.
It's almost a forgone conclusion that the rest of the cast can't quite match Wichmann. Only Margarette Joyner as the prescient former queen Margaret proves a worthy adversary, hurling rafter-rattling curses on Richard and his compatriots. Melissa Johnston-Price as Richard's sister-in-law, Queen Elizabeth, also holds her own in an emotional confrontation late in the action. By then, Richard has effectively dispatched his brothers — including the sitting king, Edward IV — and removed other competition for the throne in what becomes almost monotonous efficiency.
Director James Ricks has placed Shakespeare's most despicable villain in a modern context, transferring several scenes into crisp and often comic video segments. These clever interludes punch up the energy at several key moments, but also tend to make the scenes that follow seem flat in comparison. Some of Ricks' other directorial choices are not quite as inspired, ineffectively hiding Rebecca Anne Muhleman (who is luminous as Anne) under some hideous sunglasses to play the queen's son, for instance. Still, while choices like these diffuse the power of the play, the production's star shines undimmed. S