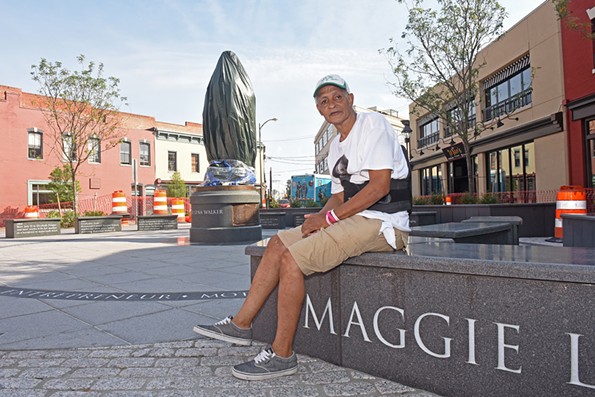 Melvin Jones Jr. walks around the new Maggie L. Walker statue at Broad and Adams streets that's wrapped in tarps like a birthday present. When it's unveiled on Saturday, the 153rd anniversary of Walker's birthday, it’ll be an extra sweet gift for Jones.

Maggie Lena Walker, the businesswoman and civic leader who broke barriers during her life, has had a steady presence in Jones' life, too.

A 1971 graduate of Maggie L. Walker High School, now Maggie L. Walker Governor's School, and president of its alumni association, Jones led a campaign to get Walker on a stamp. When that stagnated in 2009, he turned his attention to a Richmond statue and a city ordinance to erect one that languished on the shelf in the late '90s.

Dozens of trips to City Council, hundreds of letters and thousands of petitioners later, Jones emerged as a driving force behind the statue project. Mayors as far back as Tim Kaine offered their support for it.

"I don’t know how many mayors I went through," Jones says.

At a June 26 meeting, the current City Council proclaimed — as it has done in the past — July 15 as Maggie Walker Day. Councilors and administrators took turns praising Jones’ dedication to the cause.

“This wouldn’t be possible without your diligence,” said Council President Chris Hilbert.

Councilor Kim Gray joked about making a statue to Jones one day.

Today, Jones, 61, is at Broad and Adams keeping an eye on things. He's been coming to the plaza almost daily from his North Side home for months since the September groundbreaking, watching for the statue's installation, he says.

"It’s like a new home," he says. Retired from DuPont, the city and the military, Jones acknowledges moments of opposition along the way, "but I think everyone's coming together for it," he says.


And Jones speaks highly of everyone involved.


After the unveiling of the statue by sculptor Tony Mendez, Jones says he has a table for six reserved on the second floor overlooking the plaza at Max's on Broad, where he hopes to sip champagne with friends.

He jokes that he hasn’t slept since the process started: “But after Saturday …”

With the statue in place, Jones is returning his focus to the campaign to get Walker, who died in 1934, on a stamp.

In Richmond, though, Jones says he might take a break from Walker advocacy.

“I’m going to take a deep breath,” he says. “I just kind of want to enjoy this, come up here and maintain it, make sure everything is secured really good. I really take pride in this.”

The celebration and unveiling of the Maggie L. Walker statue starts at 10 a.m. on Saturday, July 15, at Broad and Adams streets.