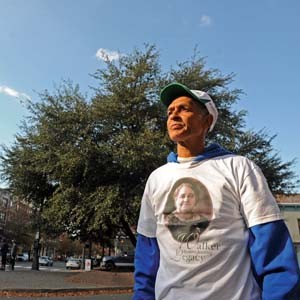 Move over, Confederate generals. You too, Arthur Ashe. It's Maggie L. Walker's turn.

Melvin S. Jones Jr. is launching an effort to place a statue of the famous banker on a small triangle at Broad, Brook and Adams streets. It would be only the second historical monument in Richmond to depict a woman.

“I think it'll be real good for Richmond,” says Jones, who is national president of the Maggie L. Walker High School Alumni Association and an enthusiastic promoter of Walker's legacy. Recently, he says, the U.S. Postal Service gave the thumbs-up to his proposal to place Walker on a postage stamp in 2012 or 2013.

Jones pictures a marble monument on a pedestal, ringed with lights, about the size of Bill “Bojangles” Robinson statue at Adams and Leigh streets. Jones is circulating a petition to get popular support for it and plans to start raising funds soon.

City Councilman Chris Hilbert has submitted a proposed ordinance that would allow the statue to be erected and require that it be constructed entirely with private funds.

Walker, who lived in Jackson Ward, is best known for being the first woman in the United States to start a bank. The St. Luke Penny Savings Bank she founded in 1903 eventually became the Consolidated Bank and Trust Co., which is now the oldest bank continuously operated by African Americans.

But Walker was more than a bank president, says David Ruth, superintendent of the Richmond National Battlefield Park and the Maggie L. Walker National Historic Site.

“She had much more influence in the very early civil rights movement, during Jim Crow, than I think people really examined early on,” says Ruth, who'd like to see a statue of Walker that shows “her power, and prestige, and pride.”

There are 153 outdoor sculptures in the Richmond area, according to the Smithsonian Institution's Save Outdoor Sculpture database, which counts things as varied as the giant scissors on Lakeside Avenue and the iron dog in Hollywood Cemetery.

But there is only one other historical monument depicting a specific woman (with the exception of biblical figures and gravestones). The Civil Rights Memorial in Capitol Square includes a figure of Barbara Rose Johns, the student who in 1951 organized a walkout at the segregated high school in Farmville for blacks.