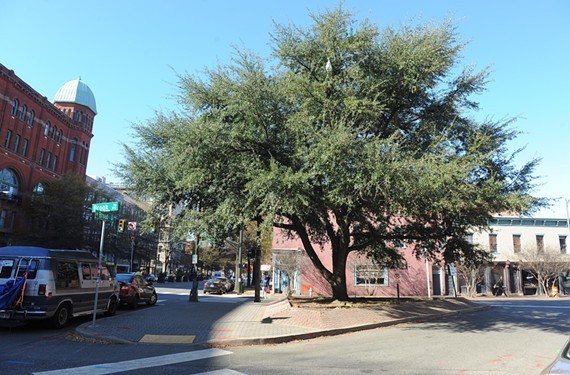 For years, artist Rubin Peacock has specialized in selling bronzed sculptures from his gallery at 303 Brook Road, a short walk from Broad Street and a small square dominated by a rare live oak tree in Jackson Ward.

Now, Peacock faces uncertainty because the city is remaking the space around him into a memorial to Maggie Walker, the black businesswoman and civil rights activist.

“I don’t know what’s going on,” he says. “I don’t know how I am going to unload cargo because the city has closed part of Brook Road. “The city doesn’t even seem to have a budget for the memorial.”

Realtor Jennie Dotts, a preservation consultant and member of the Friends of Brook Road group, says the memorial has been cloaked in secrecy and confusion. She has showered city officials with requests for information about details of the project.

The memorial drew concern early on when people learned a beloved live oak tree was likely to be removed from the small square near where historic Brook Road intersects Broad Street.

And now there are questions about the scope of the project. Dotts says it will cost $1 million in public money, including $300,000 to Antonio “Toby” Mendez, a Maryland sculptor who was awarded a contract to design and carve the statue and pedestal. Original plans in the 1990s called for the memorial to be funded completely by private donations.

Dotts says the city Public Art Commission, which is directing the project with the city planning department, didn’t issue routine requests for proposals. Instead, it sought “requests for qualifications” from artists, including résumés and samples of their work.

“We’re trying to find out why this was so and if there was competition,” Dotts says.

Ellyn Parker, public art coordinator for the Department of Planning and Development Review, says in an email that the city decided to use the “request for qualifications” of potential artists because that’s how similar matters are handled in other cities, and that Richmond was more interested in the talent of the artist than a specific project.

“There were 96 applicants and Antonio ‘Toby’ Mendez was chosen by the [Public Art Commission’s] site team,” she says. Mendez was selected last winter and his contract was signed in May.

As for the cost of the project, Parker says: “The budget is not final until the project is approved at the [Planning Commission] and then will be determined. Right now cost estimates for the plaza portion are around $667,000 in addition to the Statue which is allocated for $300,000.”

The Planning Commission is expected to consider the budget in late July.

She adds that funding for part of the project will come from “public art 1 percent funds,” which is a “mandated source of revenue for public art that comes from the capital budget for any city capital projects above $250,000.”

The 1 percent fund will pay for the statue and for “some of the plaza elements.” She didn’t specify which ones.

Other than the 1 percent fund, the money will come from “some other departments” that “will contribute.” She didn’t identify those departments.

Another item of concern is that the project called for $200,000 in granite for benches at one point, Dotts says.

That’s no longer the case, Parker says, although granite veneer may be used for some benches. More details and cost breakdowns will be available for public disclosure July 7, she says.

The overall price for the project increased after the site was determined and “the opportunity to go beyond just a statue” came up, Parker says. “This is a priority project for the Jones administration and the Public Arts Commission.”

Another problem that hasn’t been worked out is how parking and truck drop-off issues created by the closure of Brook Road will be resolved. City Council approved closing the road in December.

“There are several businesses on that block that will likely see an increase in foot traffic due to the visitation of the site,” Parker says. “Measures are being taken to accommodate deliveries and parking issues for that block.”