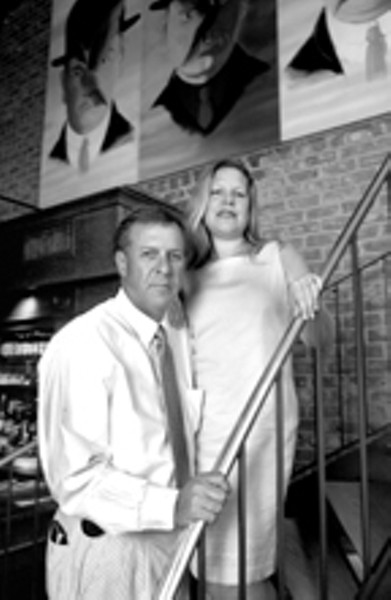 Cabaniss and his wife, Amy, sitting in Julep’s office during a rare sunny day in late June, say they were actually looking for a place in the West End when they found this one. “But our first love is old buildings with unique architecture,” Bill explains, “and it just wasn’t out there.” In fact, you get the feeling talking to these two that if they love serving people good food, they love creating the settings at least as much, if not more.

They first got into the restaurant business in 1997 soon after they were engaged. Amy was visiting her father in Maryland when she got a call from Bill, telling her, out of the blue, he’d just bought a restaurant.

Yet she and Bill ended up perfectly matched to roll the dice on the restaurant game. Amy had been a hostess and waitress for years before receiving her marketing degree from Virginia Commonwealth University. Bill brought management experience to the table as the former owner of the Cornerstone catering company and Bacchus and Beef, a wine and fine meats wholesaler he owned with his brother Bob.

Bob Cabaniss also moved further into the food and drink business as the new century dawned. He owns Williamsville Brewery, the makers of Work beer, and Main St. Beer Co., the upscale Fan brew pub and restaurant near Meadow Street.

The two brothers now keep their business interests separate, and Bob, who runs Williamsville with his sons, Rob and Jay, is a hands-off restaurant owner, leaving the day-to-day operation to managers. But he echoes the family’s love of fabulous spaces when he explains how he gutted an old grocery store and filled it with modern-looking bright steel and wood so he could have a cool place to sell beer: “I had a building. I wanted something different and unique for Richmond, so I hired a designer.”

Conversely, you get the impression that Bill and Amy practically live in their office at Julep’s. When they bought Cabo’s, Amy says, “I explained [to Bill] that we’d have to work 80 hours a week just to break even in the beginning.”

Does the hard work pay off? Drive by Cabo’s on Broad on any given night and it seems to be jumping from street level. Julep’s will be a real test. Shockoe Bottom has a reputation as a fickle mistress. But Bill is confident. He thinks that providing a dining setting that’s just as satisfying as the food (note the quick move of Cabo’s to its much larger Broad Street locale) is the key to keeping the doors open. “I’m just a firm believer,” he says, “that if you give people what they’re paying for they’ll come.”