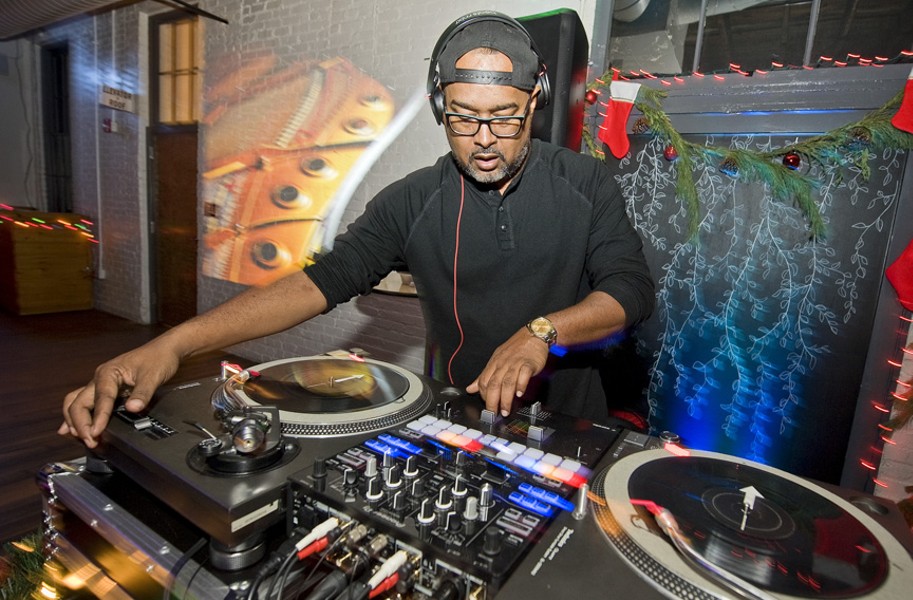 Ash Daniel Rapper Mad Skillz, who got his name at the University of Richmond, has signed on as an artist-in-residence there. He starts teaching at the School of Professional and Continuing Studies this month.

When rapper Mad Skillz released the album, "From Where???" in 1996, he provided national exposure for Richmond and Virginia hip-hop. Since then he's gone on to perform or collaborate with international superstars including Jay-Z, Nas, Timbaland, Pharrell, Will Smith and Nicki Minaj, and Missy Elliot.

Skillz, whose real name Shaqwan Lewis, still challenges himself: Starting this month he'll give teaching a try as an artist-in-residence at the University of Richmond. Alongside professor Erik Nielson, he'll teach a class called the Voice of Hip-Hop in America at the School of Professional and Continuing Studies, exploring the intersection of the genre and American culture.

"I wanted to work with Skillz because he's the perfect combination of the national and the local," says Nielsen, assistant chairman of liberal arts at the university. "He's got deep connections to the Richmond community, including the University of Richmond. He got his start as a rapper here. Once I learned that, there was nobody else I would've considered teaching with." It was at the school's radio station, WDCE, some 25 years ago where Skillz received his rap name live on Mike Street's radio show.

There are many goals for the class, Nielsen explains.

"We obviously want to look at the ways hip-hop has evolved over the decades. That will involve taking a close look at the art of hip-hop," he says. "But this is a cultural movement, and in order for students to understand that, we need to engage broader topics such as race and politics as well."

Skillz will be joining an group of current and past hip-hop artists in residence: Pharrell at New York University, 9th Wonder at Duke University, Afrika Bambaataa at Cornell University, and Popmaster Fabel at NYU and University of Richmond.

Style spoke with the newly minted hip-hop professor and talked about his personal history, the origins of his course and hip-hop's impact on American culture.

Style Weekly: How did this opportunity come together?

Mad Skillz: Like a year ago, I met the professor, Erik Nielson, doing an interview for something else. At the end of the interview he asked me if I ever thought about teaching. I said, "No, not really." He explained the class to me and asked if I would be interested and I said, "No, not really." He said this class was something he'd been trying to do for years, but he had never found the person to do it with. He said I'd be the perfect person. He said that if he didn't do the class with me, he wouldn't do it at all. We switched numbers and every month he would call me. Every month he would ask me if I thought about it. He was very persistent.

Eventually I talked to 9th Wonder (a member of Little Brother, artist-in-residence at Duke University, North Carolina Central University, and the University of Virginia, and W.E.B. DuBois Fellow at Harvard University0 who does it, and I was sold. I started thinking about the curriculum and how it would go. I've done lectures and public speaking but I've never taught a class. So it took about a year talking back and forth (with Nielson) and planning the class. Once we had our stuff together we approached the university and ever since then it's been gold.

What did 9th Wonder tell you that convinced you to take this gig?

Once I started to think about the things you needed to teach a class, I wasn't sure if I was qualified. I hadn't put my hip-hop knowledge into a scholastic form. But 9th Wonder said that if they gave degrees in hip-hop, I would have one. He said, "Do you know what you're talking about? You've been involved in hip-hop since the 1980s. So you would have a degree."

I thought about it in that format and I can talk about hip-hop all day. It's a lot to cover from the beginning of hip-hop till now, and professor Nielson helped me to break it down into increments where one class can be about this topic, and another class about that topic. He has that in-class experience that I don't have and I have that hip-hop experience that he doesn't have. So I think we can come together and do something very special at the university.

I read that you got your start in hip-hop and your name at the University of Richmond. What's the story behind that?

It might have been 1990, either the fall of 1990 or 1991. I had a friend named Mike Street who had a football scholarship. He's now the director of programming for [106.5 The Beat] here in Richmond and 103 Jamz in Virginia Beach. He had a college radio show called the "UR House Party." Back then, when you played songs on the radio you had to log the songs you played. He hated doing that. He hated stopping to DJ to write down what songs he played. So he asked me and a couple of other people who were rappers to freestyle on the air and have us write the song log.

One particular day I'm there, and I didn't have a rap name at all, and I'm rapping. We would always tell people to call up 289-UR90 with requests. People would call up and ask for songs. This one guy called up and Mike put him on speaker, and I'll never forget it, he was like, "Yo, who was that dude rapping over that Gravediggas' instrumental?" Dude was like, "I don't know who he is, but he has mad skills." And that was it. I've gone by Mad Skillz ever since.

What do you think the impact of hip-hop on America has been?

You can cover so much ground with hip-hop now, because it's older. This music has moved the needle of the young people in America in culture for so long. I can remember when people thought it was just a fad, then they had to acknowledge it, and I remember they wouldn't televise the awards. Now you look up and it's everywhere. It's everywhere. And it's our form. It's the urban CNN. If you want to know what's going on with the youth in America, listen to hip-hop. It's a time capsule, every year. Hip-hop will always tell you what happened.

Your course will be housed in the School of Professional and Continuing Studies. It's designed for more untraditional students. Was that by design from the beginning to reach a broader spectrum of students?

That was something professor Nielson pushed for. He wanted to reach as many people as possible: traditional students, part-time students, athletes and evening students. He wanted everyone who was interested in learning more about hip-hop to feel like they could take this class. It won't be a course where the teacher knows everything. I know I'm going to learn some things, too. This is going to be a course that crosses all kinds of boundaries and everyone is going to learn. That's what I think makes this course so special.

What are you most excited about for this semester?

I'm excited for the opportunity to continue a dialogue about this culture and how it has affected America. It's everywhere. It's in politics. It's in our culture, but it's something we never talk about. It's just there. The music is just there. I'm excited to be able to talk to people and learn from these students and be able to give them something new, something they might have been looking for.

Our only issue was our starting point. There's a lot of ground to cover, so the hardest part was trying to figure out where to start. I'm excited about digging into the curriculum and being in a setting where I'm able to experience these kids and how they think and feel about hip-hop. I'm excited about the idea of being able to talk to a kid and ask, "When was the first time you listened to hip-hop?"

Did you ever think that hip-hop would move from the streets to the halls of academia?

No, not at all! That's the beauty of hip-hop. We never thought it would touch American culture and people the way it has. The thing about hip-hop is that it always brings you to places you never thought you would go.

I think about how from the time hip-hop started to now it all falls under the category of American history. It is just as important as any other thing that they teach in the schools. I never thought it would go this far. I never thought I would be teaching a course on hip-hop. Who knows where it will go? It's a part of our culture and history. It is American history.

Looking past this semester, is teaching something you plan to continue?

Yes, definitely. I'm looking forward to this one, seeing how it goes and the possibilities it opens up. I just want to focus on this semester and see how it goes and make sure it's all the things it should be. I put a lot of other things on hold and I'm ready for it. I'm superexcited about it.

Last thing: Will you name all the names in "Ghostwriter"?

OK. Real last question: Will the Supafriendz make an appearance?

Definitely in February. We're thinking of doing one class that's open to the public. My rap partners and friends will be welcome to swing by and make an appearance. Their names are going to be mentioned throughout the course. They were the people that were closest to me and I give them all the credit for starting the movement and getting hip-hop started in Richmond. They were central to my success and are still my friends to this day. So you're definitely going to hear about them, especially in terms of Richmond hip-hop history, of course. S