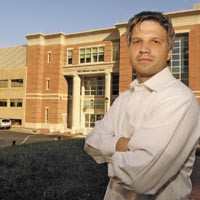 A riddle: What does Maciek Sasinowski do?

He has a doctorate in computational plasma physics from the College of William and Mary and developed an algorithm to analyze thermonuclear fusion plasmas. His company, Incogen (Slogan: “Harness the Power of Informatics!”), was recently awarded a $3 million grant to develop a cancer diagnostic platform based on the combination of protein mass spectrometry and DNA microrarray technologies.

Got it? Neither did we. Suffice it to say Maciek, pronounced “magic,” is living up to his name.

To simplify, Sasinowski is developing technology that would allow doctors to take a blood sample from a patient and test it for the specific biological markers of cancer, making it easier to diagnose before it spreads. Today, cancer is diagnosed primarily through painful, expensive biopsies.

“In cancer the main, huge issue is early detection,” Sasinowski says. “If you detect it early then your treatment options are so much greater.”

Sasinowski's research has many applications, but the cancer research motivated him to enroll into medical school at Virginia Commonwealth University this fall, where he'll spend the next 4 years studying to become a doctor. “Everything I'm doing now in medical school is making me a much better researcher,” he says.

Meanwhile, Sasinowski, who lives in Jackson Ward, will continue to run the business, which is based in Williamsburg, practice martial arts, play intramural football and hone his skills as a pianist. He also volunteers in Project Smile, which pairs budding physicians with children diagnosed with cancer. Did we mention that Sasinowski, a native of Poland, is a former champion gymnast?