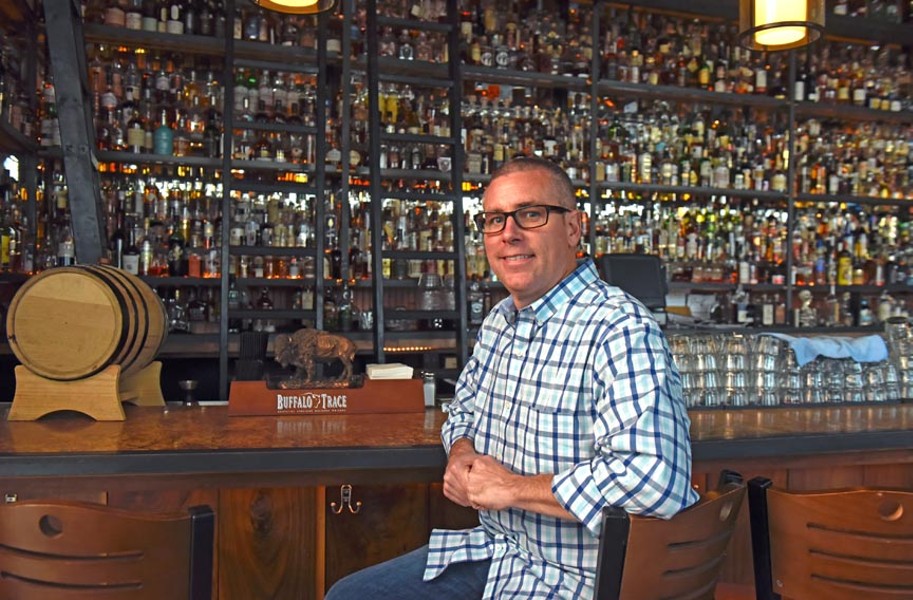 The goal was simple in concept: create a Richmond bourbon that could compete with some of the legendary names on the market — but at a cheaper price. Restaurateur and local whiskey impresario Mac McCormack was confident that it could be done, so he began to experiment by blending well-known liquors with Reservoir Distillery’s single-flavor whiskies.

“I came to them with this idea to mimic Pappy Van Winkle, but improve upon it with their whiskey — which sounds kind of crazy,” McCormack says. A lofty goal, since Pappy Van Winkle is considered by many to be the holy grail of bourbon. It’s next to impossible to find a bottle at anything approaching affordable.

The result of McCormack’s work with the Richmond-based Reservoir is Holland’s Ghost, an aged bourbon that has local enthusiasts excited. The name is a reference to a spirit that visits the titular character in the story of “Rip Van Winkle,” another nod to the bourbon’s inspiration. Reservoir is shooting for a mid-July release, but there’s a catch: It will only be sold to Richmonders. That’s by design, he says, not only because Reservoir is a small-batch distillery, but also because of the value of word-of-mouth.

“The crazy thing about some of the really rare bourbons is they kind of instantly take on this huge aftermarket value,” McCormack says. “I think it’s going to happen immediately, the bourbon is that good.”

High praise from a man whose three whiskey-themed restaurants are lined with ceiling-high shelves of his favorite spirit. It has been a passion project for McCormack, who says he wants to see Richmond on the map for the brown liquor in much the same way that the city’s becoming known for beer.

“People all over the country have been messaging me on Facebook, wondering where they can get a bottle of this bourbon,” he says. “I feel like a jerk telling them they can’t.”

Holland’s Ghost will be limited to about 250 bottles and retail for $125. The distillery itself is probably too small to accommodate a release, McCormack says, and it’s unclear whether ABC regulations will allow an off-premise license for the event to take place at McCormack’s Big Whisky Grill at Regency Square.

“We’re trying to figure it out,” McCormack says. “If it can’t be done at a restaurant, it’s going to be there in the parking lot.”

So, if all goes according to expectations and this bourbon becomes a rare collector’s item, how about a preview? McCormack says it’s a 107-proof bourbon, full-flavored with a bit of heat and blending notes of chocolate, cinnamon and hazelnut. The flavors are enhanced, through a secondary aging of 10 months in an Ardent Craft Ales stout barrel.

“The nose of the whiskey has this smell that makes me think of a chocolate crème brûlée, and then the finish is rich and thick, which is a change from normal bourbon,” he says. “It leaves this dessert feeling in your mouth after you finish it.”

If you’re interested in snagging a bottle, McCormack says the best way to do so is to pay attention to social media. Between ABC regulations regarding the launch and a label misprint, the actual retail date is still in to-be-determined territory. But even if you miss out on this first batch, a second one is only a few months off. More releases, however, likely will taste differently from Holland’s Ghost.

“In the future, we’ll probably do other releases that are variations, but the second batch is the exact same thing because we wanted to be sure we could replicate how we made the first one,” McCormack says. “I just tasted it Wednesday, and it’s still spot on.”

He will, of course, stock Holland’s Ghost at his restaurants, but he’s limiting even that to just 10 bottles.

“The restaurant doesn’t get anything from [the sale],” he says. “None of that comes to me. I have to pay the same price as everyone else.” The real focus, McCormack says, is growing the program for private collectors.

“When you look at different distilleries around the country, they have releases that they entire bourbon community is waiting on,” he says. “Reservoir doesn’t have that right now, but I think this particular bourbon will be the one that people in Japan and Germany are clamoring to get. It’s really delicious.”