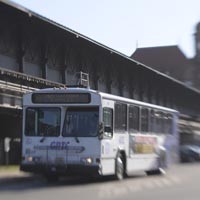 If a tree fell on the GRTC Transit System's No. 65 bus to Stony Point Fashion Park, would it make a sound? Chances are no riders would be aboard to hear it.

The lonely ride with an average of about two people per bus is an extreme example of why Mayor Dwight C. Jones may be on board with a GRTC proposal to deregulate the bus system's routes.

“I've been trying for a year to eliminate that route,” GRTC's chief executive, John Lewis, says of the Stony Point trip. “Because I have to go through the political process … we've lost more than a half-million dollars — because we're forced to operate a route that's inefficient and doesn't work.”

Fares on the Stony Point bus amount to about $27,000 a year, Lewis says, meaning that GRTC runs the route “with a 95-percent subsidy” from the city. “It would cost less money to go ahead and buy those two people a car,” he says.

Jones appears to get the point, suggesting that he may have a proposal “in the near future” to re-examine the route structure.

It only makes sense, says George Hoffer, a transportation expert at Virginia Commonwealth University, but “all I can say is good luck.”

The problem facing Jones and Lewis is how to wrest control of city services from politicians: “City Council doesn't want to give up services for its constituencies,” Hoffer says. “I would applaud putting some economic rationality to bus routes.”

The resulting operational change to GRTC would be an improvement, Hoffer says, citing Greyhound as a national system. The interstate bus system went bankrupt operating on governmentally mandated routes, and has experienced resurging profitability after a lift of mandated routes.

GRTC's Lewis “wants to do for city transit what we did between 25 and 30 years ago for the airlines and intercity buses,” Hoffer says.

In the short term, Lewis' bus faces another steep climb. In a reprise of last year's controversy he plans to propose eliminating, consolidating or amending a handful of bus routes.

Six routes would be eliminated [see sidebar]. Two of them — the No. 13 and the No. 16 — would be consolidated. Another route would be reduced to operate only during peak commuter times.

The reductions, Lewis says, would lay groundwork for deregulating routes: “It would give us the opportunity to add new [more efficient] routes to the system very quickly.”