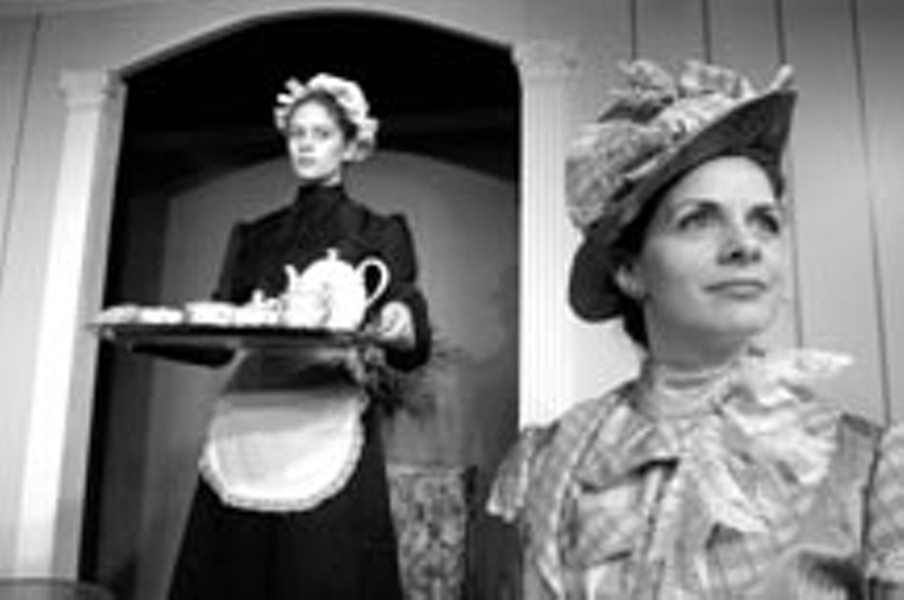 Claire (Jen Meharg) returns to the home of Anna (Jane Milici), her former lover, to ask a favor. She wants to arrange a meeting at Anna's home with a young woman she hopes to seduce. Meanwhile, we discover that Anna is the mistress of a married man who provides her with a regular "consultation" fee.

Anna isn't as offended by the proposition as you might suppose. However, she isn't going to make it easy for Claire as they negotiate the terms of the arrangement. Their acerbic, acrobatic barbs and sexual innuendos would begin to lose force if not for Mamet's playful insertion of a stock character from drawing room farces … the zany maid.

As written, the maid is not a very sophisticated character. But Director Donna E. Coghill recognizes Wiebe's gifts and exploits the opportunity to the fullest. She issues her a license to fire double takes at will. And this tall, thin actress responds by rolling her bulging eyes, contorting her face and pirouetting through scenes with expert timing.

And just because the maid steals the show, that's not to say the other performances are not good. Jen Meharg has a natural, unforced way with Mamet's trademark dialogue. Because this is a period tip-of-the-hat to Oscar Wilde, Mamet has limited himself to a handful of curse words, but his con-within-a-con circularities and intricate staccato rhythms are intact. Mehard delivers them flawlessly.

Jane Milici isn't as comfortable with the dialogue, but that matters little because she gets the big thing right: a diabolical slyness, shaded with a hint of vulnerability. Despite the unrelenting spite in her dialogue, there's something in her manner that allows the audience to root for her. And there's considerable poignancy in Anna's predicament; she's a not-so-young woman with little means of support in a culture that inhibits her ability to express herself fully.

There's really only one significant disappointment in Mamet's script. The dramatic arc flattens near the end of the play. There's a little twist at the end, but it doesn't create the upside-down satisfaction we've come to expect from a Mamet script.

Thomas W. Hammond's period costumes are a bit clunky, consisting of fabrics that appear too heavy. A string of emeralds plays an important part in the play, and though the script requires their ostentatious display, Anna's dress is all wrong for the jewels. These are blunt and, at times, vulgar women. But they are not without style. However, as you might have guessed by now, the maid's black dress, hat and apron are perfect.

And one more thing … before I forget … the maid steals the show. S