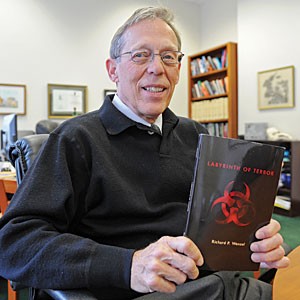 It's not your average day at the hospital.

But it's not that far from reality, either, says Dr. Richard P. Wenzel, a physician, professor and former chairman of internal medicine at Virginia Commonwealth University's Medical Center. Wenzel's first novel, a medical thriller called “Labyrinth of Terror,” was recently published by Richmond-based Brandylane Publishers.

Wenzel's previous writing career included editing several textbooks and writing a collection of nonfiction essays called “Stalking Microbes: A Relentless Pursuit of Infection Control.” Friends encouraged him to let his imagination go wild and write a novel, he says. His wife told him, “If you really want to influence people, you've got to do it with fiction.”

The result is a fast-paced book that in the first few pages leaps from steamy lovemaking to a vancomycin-resistant bacteria outbreak at King's College Hospital in London. But the plot's not hard to follow, Wenzel says: “What science there is … is really accessible.”

In the mid-1990s, Wenzel became interested in studying biological terror as the breakup of the Soviet Union revealed that decades of unmonitored research had gone into creating biological weapons.

The plot of “Labyrinth of Terror” — the race to figure out who's behind a bioterror attack and how to stop it — may sound fantastic, but the situation is entirely plausible, Wenzel says.

“The ability to manipulate organisms is not so complex,” he says. “You don't need a huge laboratory, either.” As long as someone has the required technology, he says, that person could conceivably bio-engineer organisms in their own home.

He drew on his own long career as an epidemiologist to create the protagonist, infectious disease specialist Jake Evans. Jake does what Wenzel would do in investigating an outbreak: finding out what the stricken patients have in common and identifying the organism responsible. “But this is fiction,” he says. A British agent has yet to show up in Wenzel's office.