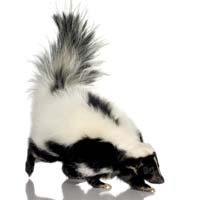 The perfumed essence of another Valentine's Day is fast fading, but the heady musk of love is likely to remain in the air — at least through March — along a short stretch of state Route 54 on the country end of Ashland's western town limits.

Locals know this half-mile or so of rancid roadway, between town limits and Blanton Road, as Skunk Alley: a grueling gauntlet of hair-curling, eye-watering highway that flares the nostrils and tests the fortitude of even the most olfactory impaired.

But to the seeming hordes of skunks that come in search of romance, this is Lover's Lane.

February through March is the skunk's natural mating season. Many of these tales of musky romance end aromatically under passing truck tires, adding to the amorous effluence of the area.

Lamentably, what smells like love to one, smells to another a lot like ... well, a lot like the bad business end of a rotten herd of Mephitis mephitidae (The poor little striped suckers' Latin name literally translates to “stench stench.”).

Robert Gentry recalls “50 years' worth” of Eau de PepAc le Pew wafting through every window, crack and door in the shoebox-sized bungalow he grew up in. “Every time you'd come out of the house you'd smell skunk,” he says. “You'd get used to it — after 10 years or so.”

Gentry's family has occupied one of a half-dozen or so cottages clustered aside this shady stretch of rural roadway for more than 50 years. On this Sunday afternoon — Valentine's Day — the air is clear of skunk, a rarity that Gentry chalks up to the unseasonable cold.

But they'll be back, wagers Cathy Howk, Robert's sister. Both now live far, far away from Skunk Alley — he in Gloucester and she downwind but at a safe distance on Ashcake Road in Atlee. Both have a strong theory as to why their backyard was such a popular place for skunky first dates.

“I think we liked to feed them,” Howk says, recalling that her mother “used to take food and just throw it out back,” making the area into a veritable stationary safari of deer, fox, stray dogs — and lots of skunks.

“This is a good place for skunk — always has been,” she says, ruminating over the female skunk's natural defense against unwanted Valentine's Day suitors, a quick shot of stink that trumps the old “I've got a headache” standby any day. “Too bad we can't do that,” she says, humming a few bars of the 1980 J. Geils Band hit, “Love Stinks.”