Love Poems and a Song of Despair

The lead actor in Virginia Opera’s “Il Postino” talks about his highly personal connection to the work. 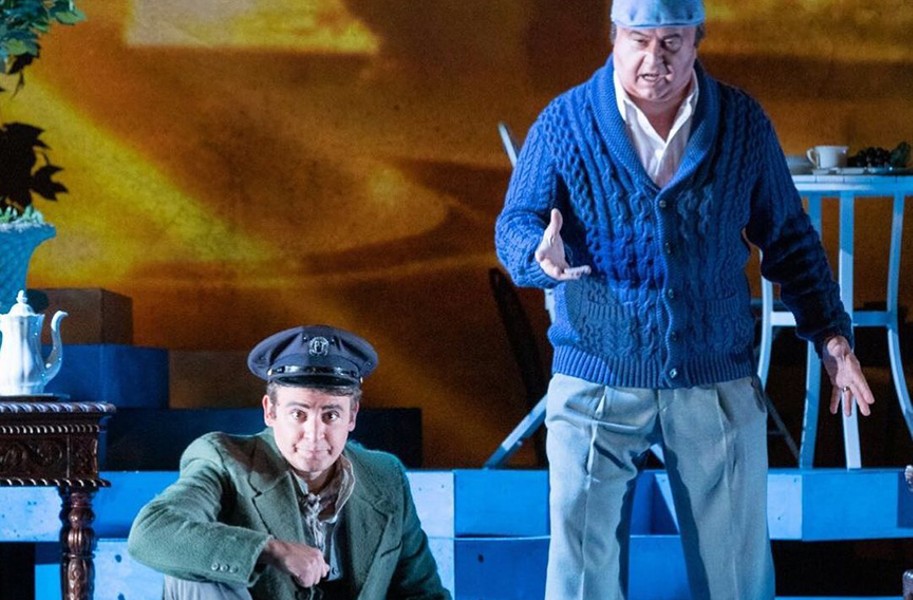 Through workshopping the lead role with its composer, appearing in its world premiere and affording him the opportunity to sing alongside his idol Placido Domingo, you could say the opera “Il Postino” holds a special place for tenor Daniel Montenegro.

“It’s just a really wonderful piece that’s been a big part of my career, I suppose, and very dear to me, because of my connection with [composer] Daniel Catán,” says Montenegro, who plays Mario in the Virginia Opera production of “Il Postino” coming to town Nov. 22.

As Catán was workshopping the piece in 2009 ahead of its premiere with the Los Angeles Opera the following year, Montenegro was asked to sing the part of Mario. He would go on to play a smaller role in the opera’s world premiere.

“I was the first person to sing my role’s part. Basically, I was kind of a guinea pig,” says Montenegro, whose feedback to Catán resulted in at least one change in the score. “He was so wonderful, so humble. He really asked me what I thought.”

The opera, which concerns a postman on a small Italian island who befriends the Chilean poet Pablo Neruda, later led to Montenegro appearing opposite Domingo in a Paris production. Not only did Domingo originate the role of Neruda, but Catán wrote it specifically for him. Recent allegations of sexual harassment by multiple women led the Metropolitan Opera to end its relationship with Domingo in September, and he resigned as general director of the Los Angeles Opera in October.

“Singing opposite him was just incredible,” says Montenegro, who first became interested in opera after being introduced to Domingo through his work as one of the Three Tenors. “He was a big influence on me to become an opera singer.”

In the show — based on a 1994 Italian film of the same name — Montenegro’s character learns about life, love and poetry from Neruda. Taking place on an Italian island in the 1950s while Neruda was living in exile, this fictional tale has Mario borrow portions of Neruda’s poems to woo his love interest.

“It’s a wonderful story about love and a young man coming into his own,” says Montenegro. “It relates to anyone who’s ever been in love. It’s a very uplifting story. It’s very cinematic in the way it’s scored.”

Adam Turner, Virginia Opera’s artistic director and the show’s conductor, says he first encountered “Il Postino” in 2016 through a production in Saratoga Springs, New York, that Montenegro starred in.

“I sat at the end of that performance in a puddle of tears, just reduced to a puddle of tears because I had been so profoundly moved by the beauty of the story,” Turner says. “I was so crazy about it. All I could think was how we could get this opera to Virginia, so that’s what we’ve been working on for the last three years.”

Part of that effort included finding the right person to fill Domingo’s shoes as Neruda.

“I really had to search for the right maturity of a tenor voice, and I found it in Raúl Melo,” Turner says. “He’s like the twin of Pablo Neruda. We saw him in costume the other day, and he just looks exactly like Neruda, and he brings this wonderful operatic tenor to the character of a poet.”

He adds that the visual elements for this production aren’t to be missed.

“You’re going to see beautiful costumes for this one,” Turner says. “You get to see lots of linens, lots of beautiful flower dresses, just gorgeous, gorgeous costumes.”

Crystal Manich, the show’s director, says that unlike many modern operas that are moodier in content and sound, this work reflects that “we’re actually in a time where we need poetry, and we need relief from the bad things in the world.”

She lauds the score as a melodic one that would be at home in the classical canon.

“To the contemporary ear, it’s a very pleasing score, and I think it also has its roots in Puccini,” she says. “Catán was really an original composer, and you will walk away humming some lines for sure.”

Manich notes that this is a bigger show, including a set with a revolving turntable and projected images that add a cinematic feel to the production.

“It’s a huge spectacle for people to come and see,” Manich says. “There is a visual poetry to this production, [and] as we journey with Mario as he finds meaning in life, so do we.”

Now in his fourth production of the opera, Montenegro says “Il Postino” continues to be a part of his life in other ways. When he was called to Paris to sing alongside Domingo, he invited his then-girlfriend to join him. After the trip, Montenegro proposed.

“Every time I heard this music, it brings me back to that time, when our love was kind of new,” Montenegro says. “This piece means a lot to me.”