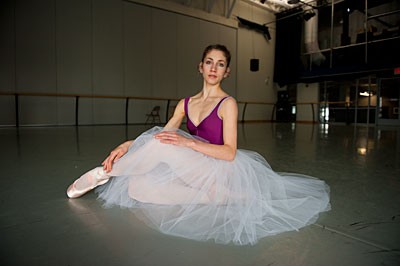 Gentlemen beware: If you go out with a modern-day Giselle, you'd better call her after your date. She'll be waiting by the phone from the moment you drop her off, and if it doesn't ring, tragedy will ensue.

For real — this girl is intense.

The ballet “Giselle” was created in 1841 at the height of the romantic movement in France, and it takes Romanticism's love of beauty, of the supernatural, of wild emotions and the contrast between the dream world and the everyday and wraps them all into one strange package. Act I: Boy meets girl, they fall in love; girl discovers boy is engaged; she goes mad and dies. Act II: Wandering morosely through woods, boy is hounded by ghosts of dead girls disappointed in love, of whom his girl is now one.

For a ballerina, Giselle is one of the great roles, on a par with Juliet, or Odette and Odile in “Swan Lake.” Richmond Ballet has cast two lead couples for its production this weekend: Cecile Tuzzi and Kirk Henning, and Shira Lanyi and Thomas Garrett. Lanyi, who has in the last few years danced both Juliet and Cinderella, has read up on “Giselle” in preparation for her performance.

The character Giselle, she says, “has a unique quality about her that draws people to her. And part of that I think is this love she has for dancing. But at the same time she wears her heart on her sleeve. She falls rapidly in love with somebody, and rapidly out of love, also. She's naA_ve, for sure. That might also be a quality that drives her to madness — ‘How could somebody do this to me?' Because she does go crazy; this one act of deceit drives her to madness.”

“Act II of course is a huge contrast,” she continues. Suddenly Giselle, as a wili (the ghostly maidens who dance unwary young men to death), reveals a mature, forgiving nature that belies her abrupt psychic break in Act I. “But — and this is something I've thought about for myself, in Act II,” she says — “it is very likely that Albrecht is making this whole thing up.” He feels responsible for her death. “So maybe that's why he's seeing this Giselle as forgiving and kind,” she says. “Who knows if this is happening? He's the only one there — everyone else is dead.”

Lanyi feels connected to the story and the character, and seems confident in her ability to navigate the emotional turbulence of this classic work.

“Every year I feel, I guess, more comfortable playing a role,” she says. “When I did ‘Cinderella,' I felt like everything had to be set for me, in terms of the acting. Because I didn't really know what I was doing — it was my first full-length, and I was very young. Now that I've done two, I just have more awareness of what it means to be a character — a heroine — in a ballet. I really enjoy bringing myself into the role.”