How a church, two professors and HIV and AIDS survivors came together to form the Valentine’s upcoming exhibit. 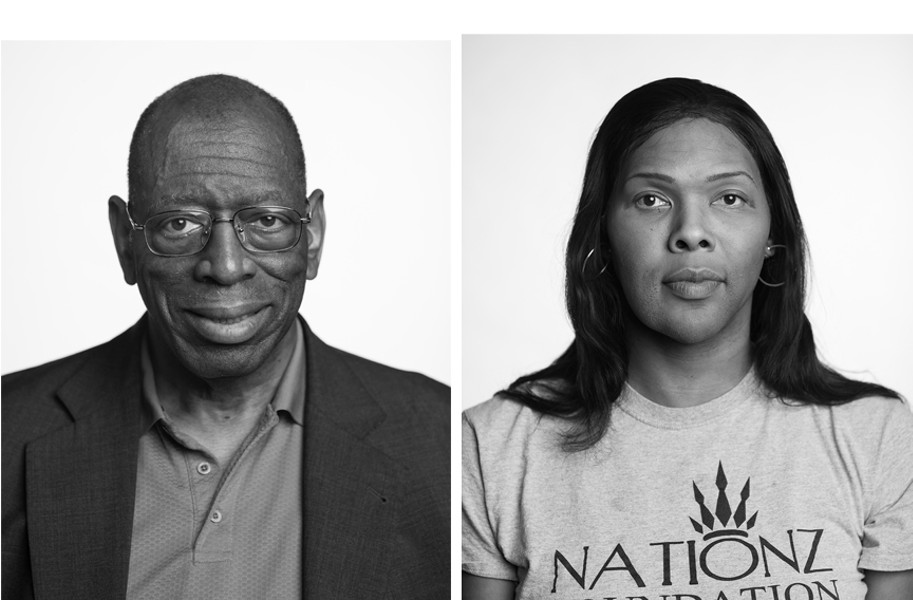 In the nook of a chapel within St. Paul’s Baptist Church, Lindsay Bryant is talking about the silicone model of a penis she has in the trunk of her car.

Willnette Cunningham, a former postal worker, AIDS survivor and fellow HIV-awareness activist who’s known Bryant since high school, breaks out laughing before saying to always check the expiration date. It’s in the crease of the opening.

There’s a model of a vagina, too, but Cunningham hasn’t seen that one.

This conversation isn’t uncommon within these walls. It’s been 25 years since a group within the church including Bryant and the Rev. Eric King — then called the AIDS awareness prevention ministry — penned a letter to the Rev. Lance Watson asking if he could do a sermon around compassion and love.

“And could we give out condoms in church?” Bryant adds. “And could we do HIV testing? And would he be tested from the pulpit? And Reverend Lance Watson said yes, yes, yes and still yes.”

In the 1990s, churches were the last ones saying anything about the HIV/AIDS crisis, adds King, let alone acknowledging how it primarily affected African American men.

“I suspect that many pastors had a sort of existential decision to make,” King says. “Are we going to sit here and just do funerals? Or are we going to help save lives?”

St. Paul’s — a predominantly black congregation — chose the latter. It has offered HIV testing, free condoms and HIV/AIDS support organizations such as Nia, which is now funded through the Virginia Department of Health, since 1995.

Since then, Bryant and King have been going to churches, using scripture and passing out a hefty manual that’s Heath Department-approved to raise HIV awareness. Bryant also presents safe sex practices with yes, the silicone models, at annual conventions of African American churches on the East Coast.

“I’m on the agenda to get up and pass out condoms. Can you imagine?” Bryant, a graduate and trained facilitator from the Black AIDS Institute in Los Angeles, says giddily.

Though on Jan. 23, Bryant, Cunningham and King will take on a different kind of stage: the Valentine’s “Voices from Richmond’s Hidden Epidemic.”

The exhibit, years in the making thanks to University of Richmond professors Laura Browder and Patricia Herrera, will present 30 black-and-white portraits of HIV survivors, health care workers, caregivers and activists accompanied by their stories. There will also be Nationz Foundation’s mobile HIV testing unit on opening day, information on Nia and cascading text panels, resembling a quilt, that memorialize daily experiences of people with HIV.

“These are the people that were on the front lines and in many cases, are still on the front lines,” says Eric Steigleder, public relations and marketing director of the museum. “As an institution, its goal is to leave this exhibition impacted and come away with a far greater understanding of the true impact of where the HIV/AIDS epidemics is in the community.”

Richmond currently ranks 19 out of 2,300 localities in the country for new HIV infections, according to the Centers for Disease Control and Prevention. Black women in Richmond are 14 times more likely to be affected — nationwide, 72% of women living with HIV are black — with heterosexual contact making up 49% of transmission cause in Virginia. Thirty-eight percent of female Virginia cases have no reported risk factor.

Photographer Michael Simon, who previously worked with the museum for a piece on LGBTQ families in Richmond, says it’s “astonishing” how it affects people of color.

With the straightforward, black-and-white portraits, he hopes to give everyone an even visual playing ground.

“I wanted the viewer of a photograph to meet this person for the first time,” he says. “I was very aware that these people were giving us a gift. … It’s these people’s lives, man.”

He goes on to recall photographing a man who contracted the disease due to a bad blood transfusion and unknowingly gave it to his wife, who died from it years later.

There’s another person who was a health worker in Chicago, helping women who were living with HIV/AIDS and finding homes for their children after they died. The mothers would have the opportunity to pick the family.

But when talking about this exhibit, and how it all came to be, all roads lead to professors Browder and Herrera.

“They went the distance on this,” Simon says. “Give them all the time you possibly can.”

Today the power duo, a team 10 years in the making, sits in Herrera’s office in UR’s Booker Hall of Music surrounded by framed shots of the seven docu-dramas they’ve created with students and the community on civil rights issues. This exhibit marks their fourth oral history with the museum.

When Meg Hughes, curator of archives at the Valentine, asked them to do videotaped interviews of people who survived AIDS in Richmond for its “Pandemic” exhibition, it made sense to do a larger project — this time solely focused on the HIV epidemic.

They began to discuss why Richmond has such high rates of infection, delving into markers of inequality that could answer the big question: Why is it off everyone’s radar?

“We as a city have so many other markers, right? We’ve got the second highest eviction rates in the nation. We’ve got the biggest food deserts in the whole country. We have extremely high degrees of school segregation,” Browder says. “All of these things feed into the epidemic.”

Browder remembers a conversation with Bob Higginson, a physician’s assistant who’s researched HIV at Virginia Commonwealth University’s infectious diseases clinic for nearly 30 years, who mentioned if you’re middle class and infected, taking your medications is a No. 1 priority. But many of the people Higginson works with are struggling with homelessness or unemployment and don’t have the transportation needed to have regular checkups.

“So maybe their HIV status falls to number five of the things they need to worry about,” Browder says. “And that’s a reality.”

Nationz Foundation started giving out food at its mobile testing unit as an incentive to get people there who otherwise couldn’t come.

“Some of the daily things that we probably don’t even think about is taking the pill,” Herrera says. “Taking that pill is actually a reminder.”

In some instances, survivors had been sexually assaulted.

“One of the participants we worked with very closely was a longtime GRTC bus driver who contracted HIV as a result of a rape,” Browder says. “So every time she takes that pill, she has to remember that traumatic experience. There’s some very, very difficult moments.”

Browder and Herrera found people trying to reframe that moment, such as Deidre Johnson, who every night at 10 p.m. films herself on Facebook doing a happy dance and taking her pill. A James Madison University graduate, she was planning to go to medical school, but in the aftermath of an abusive relationship, found out she was HIV-positive when she was pregnant. She doesn’t fall into the demographics. “She talks about that, like ‘I am not the face of HIV and AIDS, but I am here, telling my story,’” Herrera recalls.

Paradoxically, they say the women they spoke to view getting HIV as the best thing that happened to them — they learned to become leaders and support one another. That’s an important aspect to changing perceptions with the exhibit, say the professors, because these are women who have gone through so much trauma and are thriving, advocating against the stigma and shifting policy.

Frequently, the barrier is not always that medication isn’t accessible — it’s stigma.

Some travel from Charlottesville to VCU to see Higginson — who says he continues to see an average of 10 newly diagnosed patients per month — just so that other people in their community don’t see them go into a clinic. Herrera mentions a story told to her by Rodney Lofton, an HIV survivor and educator and vice president of Diversity Richmond, in which a client lived across from the only HIV clinic in his neighborhood but refused to go in.

“Because he was a grandfather,” Browder explains. “He didn’t want his children, his kids, anyone in his community to know that he had HIV. He would literally rather die than have that status known.”

An untreated HIV diagnosis can lead to full-blown AIDS, a late stage of the infection that leaves an immune system heavily damaged.

“Almost every person with HIV who we interviewed talked about a moment when they went into a spiral,” Browder says. “They became depressed, they didn’t want to leave their room … and the only way they got out of that spiral was through this community of care.”

Naturally, the conversation shifts to St. Paul’s Baptist Church and its affiliate support group, Nia, which Herrera sums up with one line:

“The most welcoming people I will ever meet.”

If St. Paul’s had an anthem, it’d be “I Heard It Through the Grapevine,” the Motown song recorded early on by Gladys Knight and the Pips, and later Marvin Gaye.

In a church that seats 2,000 people on any given Sunday service, everyone in Richmond knows what happens after the 7 a.m. lets out.

When King was asked to come to the church in 1995, he hesitated. Back then he still hadn’t told his family about his 1985 HIV-positive diagnosis. They also didn’t know he was gay. He wasn’t ready for that. He wasn’t sure they were either.

But when he gave his testimony, the weight lifted. He didn’t have to look over his shoulder anymore. The congregation cheered.

Now his portrait, alongside Bryant and Cunningham, will be up at the Valentine for a few thousand more to see.

“Until you are able to tell your story, there is so much about the epidemic that people will just not understand,” King says of the importance of the exhibition. “The ultimate challenge is to come back with a story that says, ‘Despite your living with this, your life still has value. You have a destiny.’”

If even just one person goes to “Voices from Richmond’s Hidden Epidemic” and leaves thinking “I should get tested,” it’s a win. King calls it “sowing the seeds” for the next generation to water.

Willnette Cunningham agrees, but admits she’s still surprised when people say that sharing her story inspired them to tell theirs. She’s been going to Virginia Commonwealth University for her medical treatment since being diagnosed with AIDS in 1991, back when it was the only place in Richmond she knew of to get tested.

She wishes she knew about what King and Bryant were doing then. A diagnosis can be an isolating experience, she says, and only three people in her life knew about it at the time.

Twenty-eight years later, she shares it with the world, and on the third Tuesday of every month, leads a women with HIV group who calls her “mama.”

“If they’re there on that Tuesday, they’ve actually brought them to me,” Cunningham says of VCU health care workers. “They’ll say, ‘This is Miss Willnette Cunningham, she will welcome you in.’”

Bryant’s voice starts to break when she says this is what church community is all about.

“They embraced me. Eric, anybody said anything bad to you in the 25 years?”

“Voices From Richmond’s Hidden Epidemic”
Jan. 23 – May 25 at the Valentine

The new exhibition features oral histories and black-and-white photographs by Michael Simon, focusing on the personal stories of Richmonders affected by HIV/AIDS. The exhibit includes 30 oral histories. Nationz Foundation, a local nonprofit providing education, information and programming related to HIV, will be conducting free on-site HIV testing at the Valentine on Thursday, Jan. 23, from noon to 4 p.m. The exhibit will be on display through May 25.