Richmond Triangle Players’ “This Bitter Earth” is a cathartic experience in a safe environment. 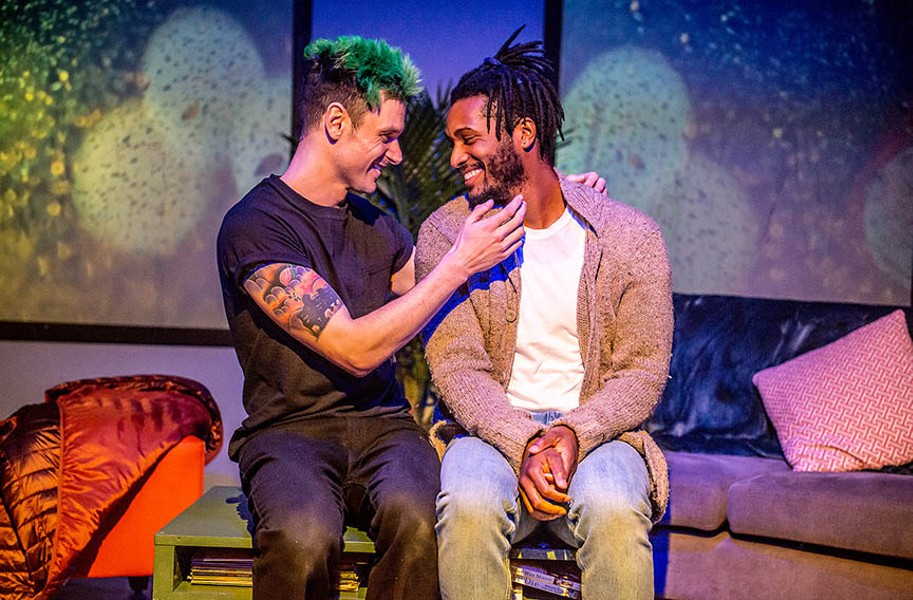 John MacLellan Evan Nasteff and Andrew “Rou” Reid star in “This Bitter Earth” which runs until Feb. 19 at the Robert B. Moss Theatre.

I really needed the night out.

I was nervous, of course. It’s still risky to attend events and large gatherings in closed spaces, but I’d had enough of streaming live theater. I wanted to be there. So, in spite of my misgivings, I decided to take the risk. Last week, for the first time in almost a year, I went out to a show, heading over to the Robert B. Moss Theatre for Richmond Triangle Players’ production of “This Bitter Earth,” by Harrison David Rivers.

Set in New York and St. Paul, Minnesota, and spanning four years, the play explores the ups and downs of a relationship between two men with conflicting ideologies. Jesse is a Black playwright whose activism takes the form of pen to paper, celebrating Black culture and identity through his creative writing. His boyfriend, Neil, is a white activist at the forefront of the Black Lives Matter movement. When Neil questions Jesse’s commitment to the cause, accusing him of political apathy, the couple’s bond becomes strained, unleashing a chain of events that sees each questioning their values and their relationship. The play asks which matters more: love or ideology?

Director Brandon Rashad Butts gets to the emotional core of a script that sometimes feels a bit drafty or underdeveloped. In his hands, these characters and their life together comes into sharp focus on the stage.

Andrew “Rou” Reid and Evan Nasteff portray Jesse and Neil, respectively. Both characters could have easily fallen into cliché, repeating tired tropes and stereotypes, but these actors made them feel achingly human. Nasteff embodies the anger, the rightful vitriol of the Black Lives Matter movement, as well as the appropriate white guilt and he carries that tension deftly. Andrew Reid, a newcomer to the Triangle stage, is definitely one to watch. His portrayal of Jesse is sensitive, serious, intellectual, but also charismatic and funny. These two make for a stupid-cute couple, too. I was rooting for them throughout the show.

Lucian Restivo’s scenic and projection design are spot on for this production: a generic, brick-walled apartment with a bed, some living room furniture and two large windows. Small set changes between scenes – a blanket removed here, a shift in scenery there – along with Austin Harber’s lighting design serve to move the story along seamlessly, indicating the passing of time. Skyler Glaser’s costume design shifts throughout the show, too, and through these slight fashion choices we can see the evidence of the characters’ growth, as well.

The socially distant seating rendered the performances all the more intimate, to my surprise. My partner and I, who were seated in a two-person pod – the theater offers socially distant seating in groups of one, two or three – agreed that there was something nice about it. We felt like we were a part of an audience, but we couldn’t hear anyone else’s small sounds: no audible sniffling, coughing or coat rustling, for example. This was still a communal experience, but with 6 feet between pods and only 20 people in the audience, it also felt somehow more personal.

It bears mentioning that I didn’t touch a single surface that wasn’t covered in disposable plastic that night. The house staff always wore gloves and masks. We ordered a bottle of wine through an app and picked it up from a bartender behind a plastic shield. Before the show began, an announcement reminded everyone that masks should always be on, except for when actively sipping a drink. The house curtain, which would usually be pulled shut for a performance, remained open to keep the space as open-air as possible. Temperatures are taken at the door and tickets are emailed to avoid hand-to-hand contact. The staff has thought of everything and it’s going to great lengths to bring audiences a safe live theater experience.

Richmond Triangle Players’ “This Bitter Earth” was exactly what I needed last week: a cathartic experience that exorcised some of the emotional baggage of the past year, in an environment committed to ensuring everyone’s safety and to mitigating that ever-present virus anxiety so we could all just relax and enjoy the show.

Richmond Triangle Players’ “This Bitter Earth” runs until Feb. 19 at the Robert B. Moss Theatre and on demand. Tickets cost $35. rtriangle.org.