Love and Other Crimes

Richmond Shakespeare explores the forbidden with “Romeo and Juliet.” 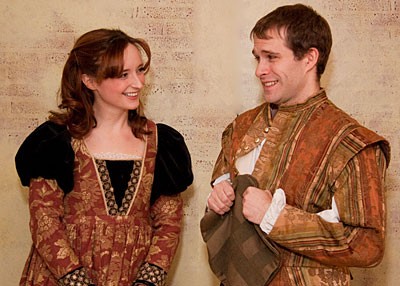 Scholars may differ on the major theme of William Shakespeare's “Romeo and Juliet,” such as the idea of predestination, or the dangers of rushing into something. Richmond Shakespeare is clearly stating the major theme is L-O-V-E, and invites the public to share in the romance.

For guest artist Joey Ibanez, “Romeo and Juliet” represents an unrequited love and a juicy role. “I always want to be Tybolt,” Ibanez says. “He gets to die, his text load isn't nearly as heavy, he is in all the fights and he gets the second act off.”

Ibanez, who trained at the prestigious Bristol Old Vic Theatre School in England and has appeared with the Shakespeare Theatre Company in Washington under the direction of Michael Kahn, should be familiar with the casting after playing the role of Romeo for more than a year at the New Players Theatre in London's West End. “I really like the nature of this [Richmond Shakespeare] company,” Ibanez says. “[I like] how it supports its actors and emphasizes artistic forum for discussion of the text.”

Of course there's the theme of tragic love. Actors Liz Blake and Jeff Cole adore working together and are reunited as tragic lovers for the second time on the boards. At Agecroft Hall two summers ago, Blake played Ophelia to Cole's Hamlet, another story in which the lovers are separated by death. “We even die on the same set piece as before,” Blake jokes. Cole says: “I like acting with Liz and I like dying with Liz onstage.”

To share the love, Richmond Shakespeare has created a love story contest in which people can submit a written version of their own great love story, tragic or otherwise. The stories will be posted in the lobby at CenterStage where patrons may vote for their favorites. The winner gets a date package featuring dinner from a restaurant in the heart of Richmond and tickets for two to a Richmond Shakespeare production. Audience members are also encouraged to scribble love notes to Juliet — as in the film, “Letters to Juliet” — which will be placed in the set piece used for the infamous balcony scene.

Grant Mudge, Richmond Shakespeare's artistic director, says: “The romance of the play is found in the tension between the extremes of all the messages of life to slow down and this acknowledgement that this couple knows instantly that they are meant for each other. How utterly romantic is that?”