For Stephen Robertson of Blanchard’s Coffee Roasting Co. it’s all about about sustainability and building relationships with farmers.

Scott Elmquist Stephen Robertson left a career in the arts to pursue a passion for specialty coffee.

Stephen Robertson can vividly remember his first cup of coffee. His grandma was watching him in rural Virginia and her afternoon ritual included daytime soap operas enjoyed with a cup of coffee and a piece of buttered toast. She'd dip the buttered toast in her coffee.

"It was kind of like biscotti, but the country version," Robertson says, recalling the cup and plate he got to enjoy himself.

In college, Robertson's foray into the daily grind included wearing the green aprons at Starbucks while training to be a music teacher. After graduating, he worked a short stint in music education before realizing his day-to-day work was draining his enthusiasm for music. Never wanting it to feel like drudgery, he quit music and entered the world of specialty coffee, which is industry lingo for coffee beans that score between 80 and 100 on quality standards of cultivation and processing.

At the time, Richmond's scene was smaller. It was 2005 and Blanchard's Coffee Roasting Co., where he's worked since 2010 as director of sales and marketing, was just beginning its operations. Robertson had grown to love the art and science of making coffee, so he went through rigorous professional certification to become what's known as a Q grader — it's like having a doctorate in coffee.

To the average drinker that might seem like overkill, but Robertson's certification to test and grade Arabica beans comes in handy when working with Blanchard's farm partners. The certification allows professionals to speak a common, science-based language of quality and to make smart decisions about which beans the company may want to buy and how to work with farmers to improve their agricultural output and get better prices for their beans. Ethical sourcing is an important component, and it speaks to Robertson's emphasis on sustainability.

Traditionally, it's done on the ever-fluctuating commodities market. That system, Robertson says, is opaque, and it often leads to middlemen siphoning off money.

Coffee growing is extremely labor intensive. Beans come from the fruit produced by a shrub or tree, and each fruit contains only two beans. All of the harvest and processing is done by hand, and the commodities market Robertson described means the farmers lose a considerable portion of wealth to mills and middlemen.

In recent years, specialty coffee has been moving away from that model. Robertson says he's seen too many farms abandoned because farmers can't sustain their livelihood on the fluctuating market prices. Sustainability for him means transparency in pricing — basing rates on quality, and allowing farmers to take home more of the wealth generated by their products.

Blanchard's began working to develop relationships with farmers in the countries where they buy coffee five or six years ago. One remarkable story Robertson shares involves a minor transportation investment with major implications.

A farm in Nicaragua experienced perennial issues with a bad road from the farm to the main thoroughfares used to move coffee. In the rainy season, it was impassable. In the dry season, the farm's revenue stream was tied up in wages for workers. Even without rain, the road wasn't great and took maneuvering to pass.

Blanchard's asked what it would take to improve this issue. The answer was deceptively simple. The company wired a modest amount of money to repair the road, and the next season, the farm increased its harvest by 40 percent and hired more workers.

Robertson's biggest frustration with coffee is how its long history as a commodity product has conditioned people to balk at paying an honest price for all the labor that goes into production. 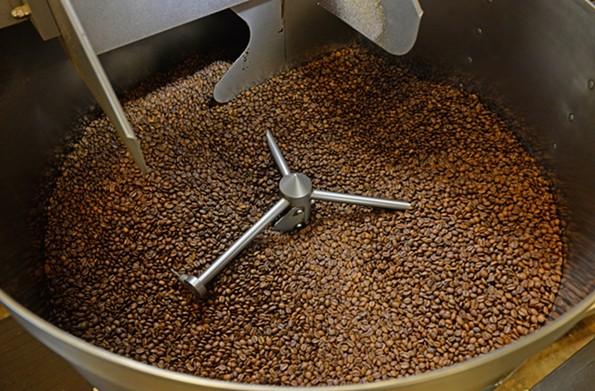 "There's still a ton of people in the world who think coffee should inherently be inexpensive. And if your coffee isn't inexpensive, then you're pretentious and trying to game the system," Robertson says. "But when you do that it's usually the least fortunate people in the supply chain who are disadvantaged."

Robertson, however, is hopeful. He finds the relationships built around coffee to be one of the most fulfilling aspects of his work.

"At the risk of sounding clichéd, coffee, at least the way we do it, it's a relationship and people business," he says. "Building relationships on a global scale with people who are equally passionate about a product we all like, and also making some sort of impactful difference in other people's lives is incredibly rewarding. It's the thing I think everybody in our company is most excited about."


Click here to read more of the Coffee Issue