For fans of old-time music, heaven is a Hardee's in Chester. 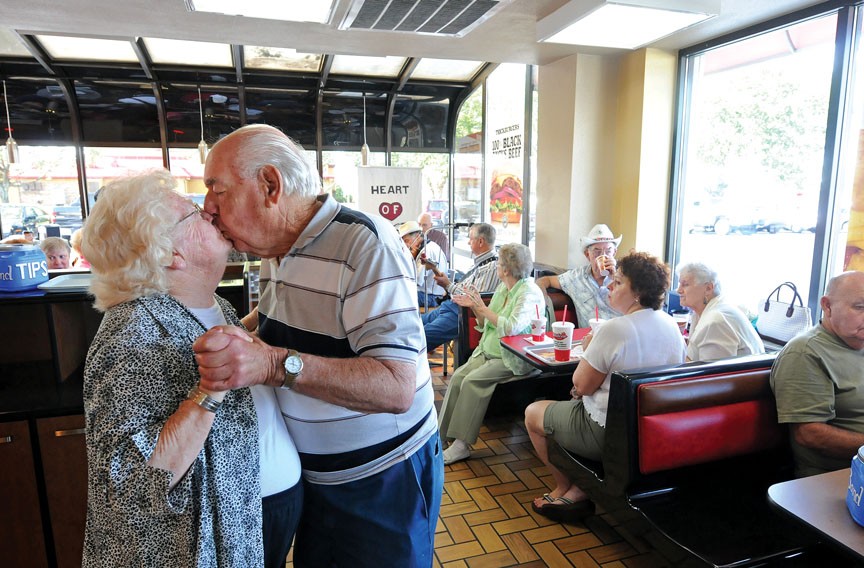 They step through the door, the people who don't know, and they stare.

In this perfectly ordinary Hardee's on Jefferson Davis Highway, as the summer sun begins to bake the blacktop, people are dancing. Men in short-sleeved, plaid shirts. Women in nice blouses and Saturday-night lipstick. They sway in the aisles, sensible sandals sliding on the fake-wood tiles, while a five-piece band plays "I Can't Stop Loving You."

The strangers listen for as long as it takes to order Made From Scratch Biscuits. And they leave. But the fans come back, every Wednesday morning, to find something they lost long ago. 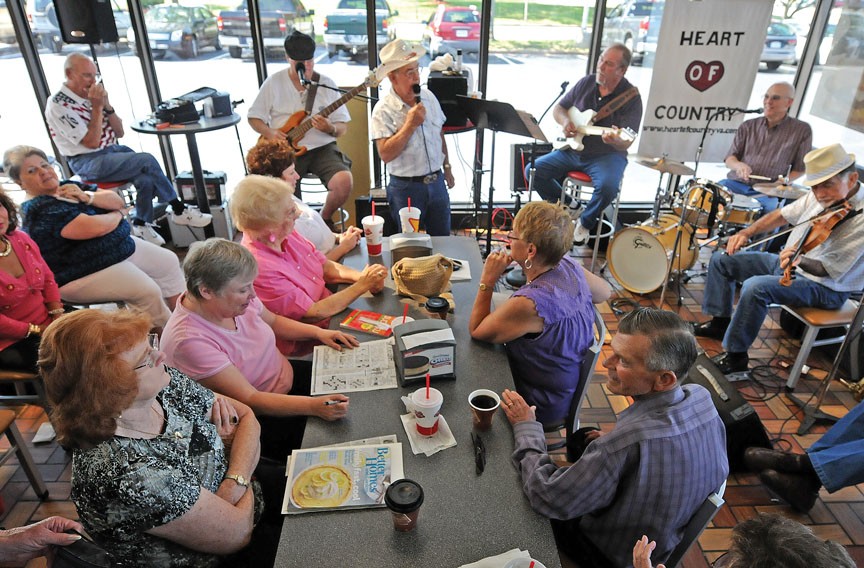 Heart of Country formed five years ago, founded by bass player Jim Bartley and inspired by its members' love of old-time country and rock 'n' roll. All are veteran musicians, with more than 250 years of performing between them. Past state-champion fiddler Cal Newman, 79, has played with the Old Dominion Opry and is a member of the Virginia Country Music Hall of Fame. That and $2.50 will get you a cup of coffee, Newman notes wryly.

Heart of Country plays festivals, weddings, senior homes, places like that. But another local band got some attention playing at a nearby McDonald's, so its members figured they'd find an appreciative audience at the Hardee's. They had no idea.

The place begins to fill around 7 a.m., long before the music begins at 8:30. Coffee cups and copies of the Village News crowd every table. "You got to get here early in order to get a good seat," confides Sonny Palumbo.

Palumbo spent 36 years with the Virginia Commonwealth University police, retiring as deputy chief. But before that, he says, "I was country." He loves Patsy Cline, Elvis too. He's been coming here to the Hardee's for two years.

While the songs vary, every concert has the same rhythm. During "Go Johnny Go," women throw up their hands and jitterbug. When the band plays "Wind Beneath My Wings," tears spring into a few eyes. The crowd never tires of the sentimental favorites: "Silver Wings," "Eleven Roses." 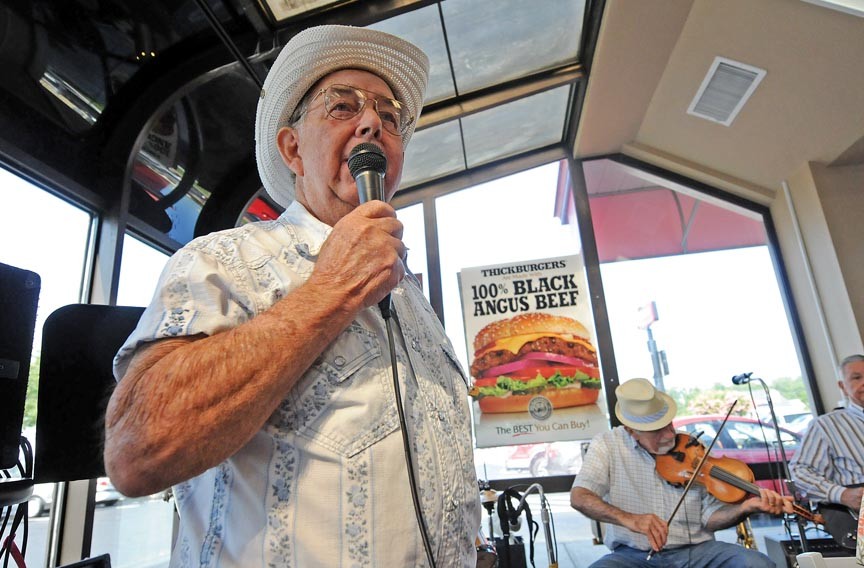 Guest performers get up to sing a song or two, or join in on harmonica or guitar. "Some of 'em are good," bassist Ed Caryl says. "Some of 'em are . ..." Regular Miss Kitty, one of the pros, always belts out "Rocky Top": "All I know is, it's a pity life / Can't be simple again."

"It's hell to get old, you know that?" That's what drummer Jimmy Traylor says, watching the silver-haired crowd chatter during a break in the music.

"These people have told me they have nothing else to look to," Caryl says. It's sad, he says, but it's the truth. The Jeff Davis Hardee's has become the one place where they can come to see friends, gossip a little, nurse a small coffee and talk over old times. Widows and widowers recall what it's like to be held close and sway to a song.

"Hell, it's the best thing that ever happened to me," Hardee's regular Barry Vassar says, dapper in a Kangol hat and bright blue polo. After his wife died four years ago, Vassar realized he couldn't stay home and lose himself in grief. He took up dancing six nights a week. At the Hardee's, he'll offer his hand to any woman sitting and tapping her feet.

"That makes a big difference, when people actually can do that, and see each other, and say, 'I'll see you next Wednesday,'" says J.C. Williams, singer and lead guitarist, who sometimes plays in Richmond with Lefty Davis and the Rough Riders.

"You have to love it," Williams says. There's no reason but love that keeps the band coming back. The coffee-can tip jar usually nets about $20, just enough to defray gas costs. Even after founder Bartley died in June, the band stayed together and kept playing. 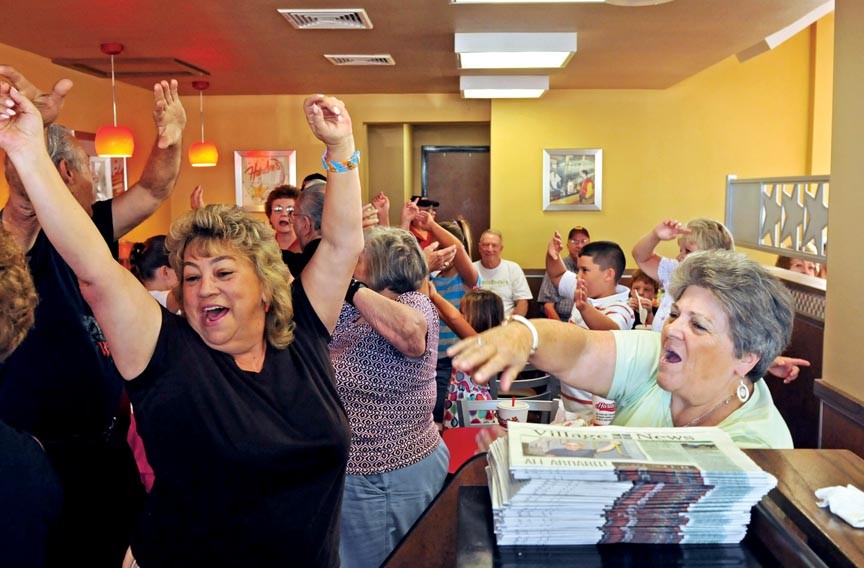 "I come here every week, unless I'm sick or something," says John Everhart, 73. He's every inch a country boy, with wet-combed hair, a deeply lined face and bright blue eyes. He was raised in Winston-Salem, N.C., by a mother who was against music "of any kind." It wasn't until he was in high school that he got himself a little transistor radio and began listening under the covers at night: rock, country, "that old boogie-woogie."

Everhart loved it so much, he joined a band that played Saturday night sock hops in a shopping center parking lot. "My mother saw me on television playing one night," he says. "I got the beating of my life." Later he worked as a music producer and booking agent for shows up and down the East Coast. Coming to the Chester Hardee's brings it all back.