by Brent Baldwin and Ned Oliver 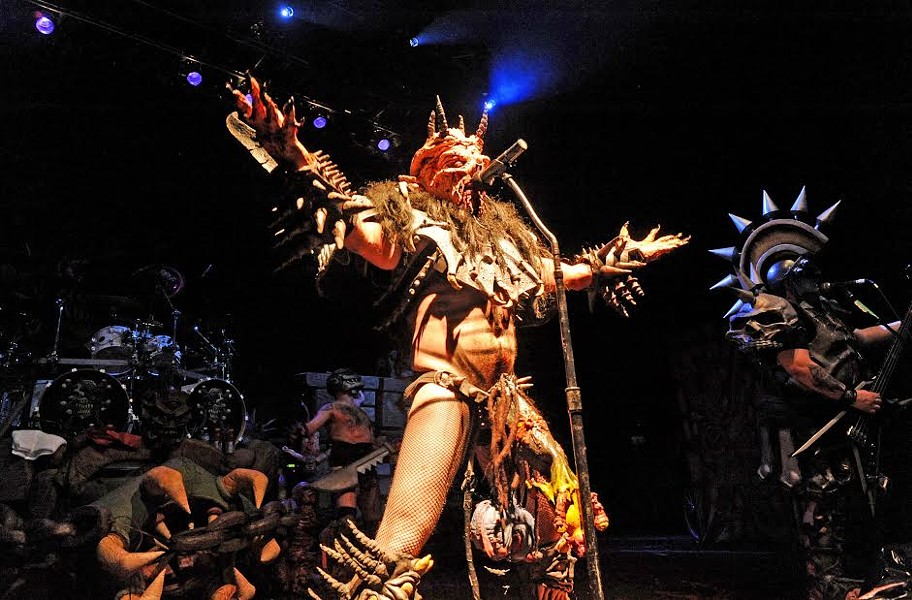 It’s difficult to imagine, but in 1987 Gwar wasn’t getting enough attention. So the band’s frontman, Dave Brockie, came up with an idea: The group donned its now famous but then somewhat primitive costumes – fur loincloths, hacked-up football pads and spiked helmets – loaded into the back of a pickup truck and drove to the CBS-6 studio on West Broad Street.

“We walk inside and Dave goes on in and says, ‘Put us on TV,’” Chris Bopst, a former band member, said. “The receptionist was flabbergasted – couldn’t say anything – so we just walked through.”

The band made it to a conference room where the news team was in the middle of its morning meeting. Brockie repeated his demand.

And so on that night’s broadcast, the group of 20-somethings was featured wielding foam battle axes and grunting atop a heap of snow.

“This is, believe it or not, a local rock band,” explained an anchor, talking over the footage.

Brockie was found dead in his home Sunday at age 50. It’s only because he was persistent, tireless and something of an ass that it came to pass that a shock rock band led by a man who adopted the persona of an alien overlord with a penchant for onstage slaughter became one of Richmond’s greatest cultural exports.

The city, which Brockie at first horrified with his wicked delight in blistering past any social taboo, slowly came to claim him. He became an institution, known not just for the costume or the music or even the acts of provocation, but because through more than 30 years he managed to succeed on his own terms – and change the city a little along the way.

“He was the polar opposite of all the Confederate, socially conservative culture Richmond was known for,” said Bopst, who left the band in 1987 and is now, among other things, a Style Weekly contributor. “I think he was a principal player in changing the perception of Richmond.

“He was a battering ram for some of the changes that have come to this city.”

Brockie’s roommate found his body Sunday night at about 7, in their house on the 4800 block of Seminary Avenue. The cause of death had yet to be determined Monday, but Richmond police told Style Weekly that detectives don’t suspect foul play.

Fewer than 24 hours after Brockie’s death, more than one resident proposed a Brockie statue for Monument Avenue. The downtown booster group Venture Richmond, operated by city officials and corporate leaders, took to Twitter to note the loss of a man it called one of Richmond’s best artists: “We lost something essential.”

“Dave was one of the funniest, smartest, most creative and energetic persons I’ve known,” former Gwar bassist Mike Bishop told Style. “He was brash sometimes, always crass, irreverent, he was hilarious in every way. But he was also deeply intelligent and interested in life, history, politics and art.

“His penchant for scatological humors belied a lucid wit. He was a criminally underrated lyricist and hard-rock vocalist, one of the best, ever! A great frontman, a great painter, writer, he was also a hell of a bass guitarist. I loved him,” Bishop said. “He was capable of great empathy and had a real sense of justice.”

Gwar’s shows were free-for-alls of debauchery, in which squirming likenesses of Paris Hilton and Justin Bieber were decapitated and gutted by the band, spraying the white-T-shirted audience with geysers of fake blood and other bodily fluids. The Grammy-nominated group, founded in 1984, released 13 albums, becoming a bridge from Alice Cooper and Kiss to Insane Clown Posse and Slipknot – bands that parents truly feared.

“We were and still are provocateurs,” Brockie told Style in 2012. “We’re just a bunch of guys with warped senses of humor spit balling the most evil ideas that we could think of, to hold up a twisted mirror to the culture.”

Brockie fronted the group as Oderus Urungus, a bare-assed space alien who wore a three-foot dong named the Cuttlefish of Cthulhu.

“He did what any artist dreams of doing,” his longtime friend Doug Dobey wrote. “He found a way to make a living doing what he loves. And he did it bigger and better as the years went by. With Gwar’s success, he and the rest of his hardworking crew kept themselves clothed and fed and housed for three decades. That’s something special.”

Not that making a living in Gwar was ever easy. Spewing gore is more complex than the band made it look, and the live shows the band took around the world were expensive to produce. Slave Pit Inc., the group’s production company, had a lot of mouths to feed.

Still, Bopst said Brockie did much to help support local artists. Even after Bopst left Gwar, he said, Brockie let him use the band’s practice space rent-free. “He did that kind of thing with everyone,” Bopst said. “If you had a creative bent, he’d help you.”

But Brockie also was something of an egomaniac, Bopst says: “When he walked into a room the attention just drew to him and he was very confident.” And as the years went by, Brockie learned to embrace publicity in all its forms.

That first appearance on Richmond’s CBS affiliate, WTVR, was the beginning of a long line of TV appearances. In 1997, the band appeared on a Jerry Springer episode about shock rock, which dedicated nearly five minutes to playing footage from a recent Gwar concert. At one point, Brockie told Springer he was an “honorary scum dog,” to which Springer replied, “all righty,” before quickly moving on. In the MTV show “Beavis and Butt-Head,” the two cartoon morons worshiped Gwar.

There was more to Brockie than gore, guts and glory. He was a World War II fanatic who recently fulfilled his life dream of visiting Stalingrad, Russia. On his return, he shared photographs from the trip at a local venue.

He also was an imaginative writer who produced some of the most memorable and quotable band news releases in the music business. (“Spontaneous beheadings and disembowelments shall be the order of the day, and a bloody attack by mutant cyborg Sawborg Destructo is sure to occur. Gwar will certainly fight back with their pulsing spew-cannon, the Biledriver, and Oderus has pledged to ... [create] legions of mutated sex slaves to spread the disease of Gwar across the entire country.”)

Those who knew the singer understood that he spent his adult life fighting to keep his twisted artistic vision alive. He always was planning the next tour or Gwar-B-Q – a Gwar-themed picnic and show – right until the end.

He lived his dream and he went big.

“The thing people need to take away from him is his incredible work effort, incredible perseverance and his unbreakable will to succeed: to be Dave Brockie,” Bopst said. “There was no compromise. When he set his mind to something, he did it.”