As the city plots its residential future, a language (and social) barrier persist. 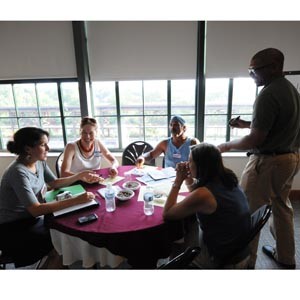 What exactly does a charrette — that fancy French used for a community-planning session — look like?

One example is found on a recent evening in a narrow, carpeted conference room in the Shockoe Bottom offices of real estate law firm Hirschler Fleischer, where a group of 35 or so hammers out a vision for a resource center.

The design headquarters is the brainchild of 7th District Councilwoman Cynthia Newbille and the Alliance to Conserve Old Richmond Neighborhoods. It's envisioned as part meeting place, part design library, part consulting studio, a place where people from all walks of life can meet to plan all kinds of the development, from home renovations to city projects.

With some city money and fundraising in the works, the first in a series of public planning sessions for the center attracts residents and designers to brainstorm while huddled around bowls of almonds and M&Ms.

The contrast in personalities is stark. Similar planning sessions have drawn criticism for lacking diversity. Charrettes seem to be popular with the urban revivalists — most are young white professionals and artistic boomers — behind the city's residential renaissance. The old-timers — who were here long before Church Hill became cool again — are less likely to traipse out for French dressing. They prefer flyers to e-mail blasts. A neighborhood meeting is a neighborhood meeting, isn't it?

There's Spencer Jones, a longtime advocate for the historic Fulton Bottom neighborhood that was bulldozed by the city during a 1970s urban renewal program. (Urban renewal, it turned out, first required urban removal of Fulton's low-income residents.) Jones is clad in jean shorts with a matching periwinkle tank top and do-rag, armed with thick notes and a map. He's been working with the alliance, city officials and local sculptor Paul DiPasquale on a memorial park for Fulton.

Perched next to Jones is Eugenia Anderson-Ellis, in prim white blouse and chunky red-beaded necklace, past president of Scenic Virginia and the Church Hill Civic Association. She wants to talk about the Commission of Architectural Review.

“Can I say something about this idea that everybody can be reached by e-mail?” Jones asks while the group talks about access to the center. He suggests that posters in churches and businesses would be a better way to reach some residents.

He fires off other ideas, declaring: “We need a store in Fulton.”

“So you need a community plan,” BAM Architects principal Burt Pinnock says. “How do we become an advocate for the neighborhood store?”

The group shares gripes about the glacial pace of stalled city projects — how politics mars trust in getting things done. And what if residents don't know the lingo — the right questions to ask?

“Fulton could link up with Church Hill,” Harnsberger says.

“But a lot of time communities don't talk,” Harnsberger says.

Jones is full of ideas, including horse-drawn carriage rides, but continues harping on the Fulton store: “You have to expand to something like a Wawa,” he says, offering up an “urban Wawa” idea with custom products.

Others at the table present their ideas to a larger group.

“I'm the one from Fulton,” Jones shouts. “And we want horses. We want everyone in Richmond to know that we want horses in Fulton. We're the only one with this idea and we're going to make it happen,” he says, hyping horse-drawn carriage rides for “the birthplace of Richmond.”

“How are you going to get Spencer in your door?” poses moderator Peter Fraser, a local designer. And, Fraser says, what to do “with him when you do get him in the door?”

Jones has more to say, bending the ear of anyone who will listen as the session wraps up.

“You had a community down there,” he says. “You don't have one now.”