WHILE THE BOTTOM grew residentially, so did the nightlife. But often lost in the debate is who was here first. The neighborhood's identity as an entertainment district began in earnest in the mid-1980s, and despite persistent turnover, it remains. But that may have been by default more than design, says Mort Gulak, a recently retired professor of urban studies and planning at Virginia Commonwealth University.

"Nightclubs are economic indicators too," says Gulak, who's studied Richmond's urban centers, including Shockoe Bottom, since the 1980s. They represent the very first stage in the redevelopment process. 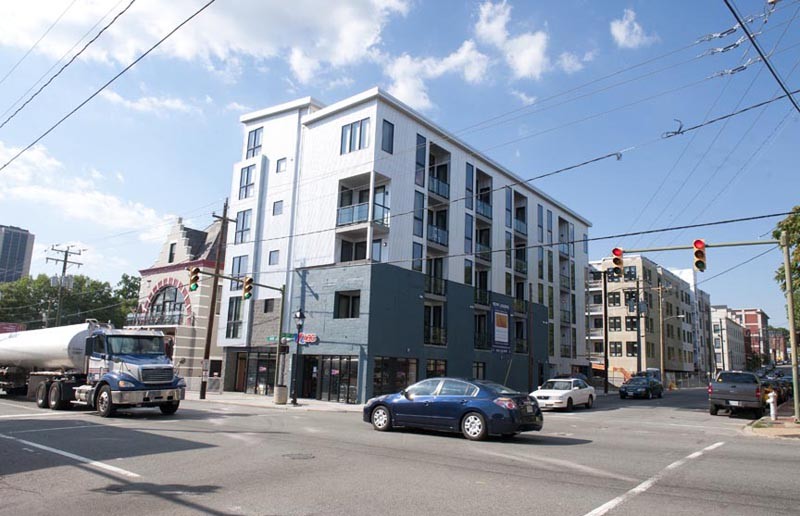 In the case of the Bottom, the buildup of nightlife-related businesses was due in part to acquiescence by the city. The other half of the equation was a lack of interest by developers in taking on projects located in a natural floodplain.

In the mid-1990s, the flood wall opened the area for reinvestment.

Developer Bill Chapman — former owner of Tonic, a bar and restaurant on 18th Street — was just another 20-something Virginia Commonwealth University student in 1995. There was little, if any, apartment space available in the Bottom then, he says. No lofts or luxury condominiums. Just bars, wide swaths of decaying buildings and scattered enclaves of restaurants.

"What you had were a lot of buildings," he recalls — "the old factory spaces, that were dilapidated and falling apart."

In 1996 Virginia established a historic tax-credit program. Administered by the Department of Historic Resources, it was designed to spur economic development by providing financial incentives to rehabilitate and preserve historic buildings, luring developers such as Forest City to invest in the area. Coupled with existing federal tax credits, developers could leverage both to obtain financing.

Others jumped in as well. Local developers H. Louis Salomonsky, David White and Bill Abeloff pounced at the opportunity. The number of restaurants and bars in Shockoe Bottom "exploded," Chapman says. "It was the place to be."

Randy Jones, spokesman for the state Department of Historic Resources, says that since 1997, 93 rehabilitation projects have been completed in Shockoe Slip, Shockoe Valley and Tobacco Row. The total investment: $342.8 million.

"I'd like to say that the city played some part in it," Chapman says. "But as an observer who was working on other projects, it all seemed to happen without much input from the city." In other words, the growth of the area grew without much of a plan, and there was little community-wide debate about the future of the neighborhood.

While development money poured in, Gulak says city officials initially seemed content not to interfere. "It's important to remember that at the time, developers were basically building a whole new neighborhood," he says. "There was nothing there but empty buildings. So there was no real objection to the new developments moving in, partly because they weren't moving anybody out."

It would be unfair to say that city officials were unprepared for the flurry of activity. It was well known that the flood wall would become a catalyst for economic growth. But by 1999, when City Hall produced its first detailed strategy for how to guide the Bottom's growth, it was clear that officials already were behind the curve.

After completion of the flood wall, the city had a strategy, Gulak says, but it was limited to the preservation of historic buildings.

EVERYTHING CHANGED IN August 2004, when Tropical Storm Gaston barreled over the city, overwhelming the Bottom's aging drainage system. When the skies cleared, parts of the Shockoe Valley sat in as much as 6 feet of water and sewage.

In a twist no one expected, the flood wall actually trapped the water in when the city's drainage system failed to funnel the rainwater out quickly enough.

Many businesses in the area lost everything. After the flood wall was built, many decided they no longer needed flood insurance.

Fast-forward to 2011, and city officials still seem to be playing catch-up. Turnover at City Hall has played a role, as have changing priorities. In addition, Shockoe Bottom has been beset by a flagging economy. Two separate plans to build a new baseball stadium in the Bottom, just north of the 17th Street Farmers' Market, struck a political lightning rod that split the community.

The city's vision of what the Bottom ultimately will become remains blurry. Big-ticket projects such as Main Street Station have been slow to jump-start new investment. And recent headlines about nightclub-related violence, including a pair of homicides last year, has fueled tensions between a black-owned nightclubs in the area and mostly white residential developers. The tensions reached a peak last spring after Jeremy Uzzle, 20, was shot to death in April 2010 in a parking lot outside of Have a Nice Day Café, one of the neighborhood's largest nightclubs.

Rodney Peterson, head of the group that manages Have a Nice Day Café, insists that he and his staff have worked with police to prevent similar incidents. "This issue isn't about us," he says. "We're doing what we need to do."

But club owners do have defenders. Phil Conein, president of creative and IT staffing company Techead, one of the Bottom's longest-tenured businesses, considers them part of the neighborhood's diverse economic fabric. "There's not one business here that does not feed off of the other," he says.

As for the sometimes unruly patrons — they're part of the fabric too, Conein says.

"It's like Mardi Gras down here on the weekends," he says. "That's not a problem. It's an opportunity. Making good on it is just a matter of how club owners — the responsible club owners — and the police and the city deal with some of these issues."