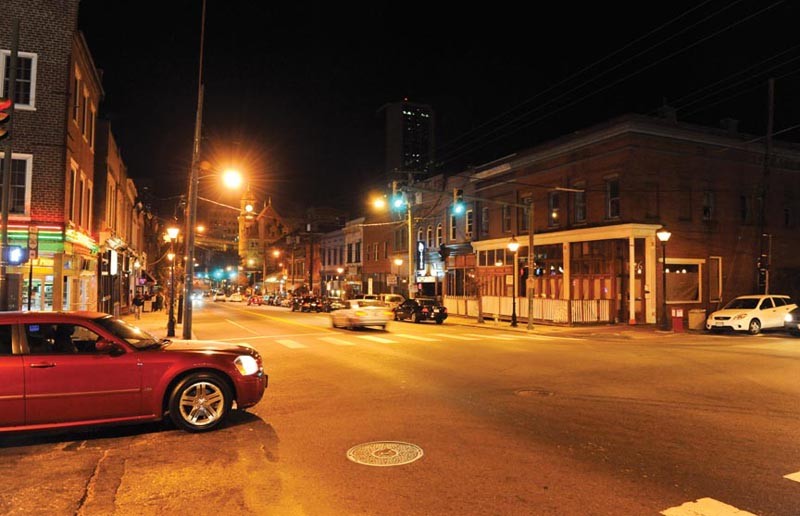 No more sleepless nights. No more attempts to drown out the sound by increasing the volume on her television. No more futile complaints to property managers. No more talk. Hanna Averitt had heard enough.

The 28-year-old hotel manager didn't know much about Shockoe Bottom before uprooting from Corpus Christi, Texas, in January 2010. After nearly a year and a half of living in the heart of the Bottom, she was still on the fence: Should she protest or simply accept the distractions as part of living in an urban neighborhood? But the thumping bass emanating from a nearby club was enough to knock her off.

A self-described country girl with shoulder-length blond hair and a slight twang in her voice, living in an urban environment wasn't something Averitt planned. She looked at the Fan in the city, the Brandermill development in Chesterfield County — even Chester, a 20-minute drive down Interstate 95 — but she fell in love with the loft in the Bottom, at 19th and Main streets. It was filled with professionals in their 20s. All her household bills are included in the $850 monthly rent. The view of the downtown skyline is "spectacular," she says. But for nearly a month starting in spring, music blaring from neighboring MoFauzy's Lounge barged into her 420-square-foot apartment, settling in like an unwanted houseguest.

"It was like someone singing karaoke as loud as they could inside my apartment," Averitt recalls. "It was during a week that the music was playing like that every night. Now, imagine trying to sleep through that knowing you maybe have to be at work at 6 a.m."

Averitt and a handful of frustrated tenants signed and delivered a petition to MoFauzy's, asking staff to turn down the volume — to no avail. Then, Averitt and a dozen residents, including the owners of the Canal Walk Lofts, Main Street Realty, filed a $350,000 civil lawsuit. Finally the club relented. The booming music stopped.

The influx of residents and economic investment in Shockoe Bottom, a bright spot in a depressed economy, also has reignited long-simmering tension between nightclub owners, their neighbors, and the youngish crowd that floods the neighborhood each weekend. There's a growing residential community emerging on Main Street, from the thousands of lofts along Tobacco Row and into the valley where Richmond was born. But as it becomes even more of the mixed-use residential district envisioned by developers, it raises a question: How and when was it decided what the Bottom is going to be?

TRANQUILITY LONG HAS been a scarce commodity in Shockoe Bottom, which runs from about 17th to 25th streets. The city's most historic neighborhood — Richmond's first eight-block street grid, established by William Byrd II in 1737 — might also be the loudest. It was the city's first commercial hub, home of the first farmers' market in the country at 17th Street. It was a center of domestic slave trading in the mid-1800s, and then a bustling tobacco manufacturing hub into the 20th century. But there's a reason people call it the Bottom. It's the lowest point in the city, and the James River sometimes couldn't help but wash the cobblestones.

After the tobacco warehouses shuttered in the 1960s, a series of devastating floods in 1969 and 1972 brought the Bottom to its knees. Businesses closed, and few people were willing to invest in the area. Slowly it turned into an entertainment district. Nightclubs didn't mind the grit, and they could turn a quick profit.

But the neighborhood's days as de facto nightclub and entertainment district may be drawing to a close. During the last 15 years, the area has been part of the fastest-growing residential district in the city. From 1990 to 2000, Shockoe Valley, up to the western edge of Church Hill, saw its population increase 28 percent — from 1,764 to 2,262 residents. In the next decade, from 2000 to 2010, the neighborhood grew 70 percent — to 3,851 residents.

After the Richmond Flood Wall was built in 1994, the area began to attract new economic investment — mostly restaurants and a smattering of apartments. But it wasn't until developers began tapping into the state's expanded historic tax-credit program that the area truly began to grow into a residential area. In 1998, Cleveland-based Forest City Enterprises purchased seven former tobacco warehouses along Tobacco Row and started converting them into upscale loft apartments. The company spent $150 million during the next few years, luring a new grocery store and retail shops along the way, and the area turned a sharp corner into a bustling residential community. Mostly the Bottom attracted young professionals, in their mid- to late 20s and early 30s, who preferred living in an urban environment over the cookie-cutter suburbs.

"I had never stepped foot in the city before," says Laura Donahue, who moved from Columbus, Ohio, to Shockoe Bottom in January. A lobbyist for the Humane Society, Donahue, 32, wanted to live close to downtown, within walking distance of the State Capitol. In 2007, three years after she married her husband, John, they moved into a 3,000-square-foot McMansion in a Columbus suburb. (Her husband stayed behind in Columbus to sell the house, she says, and eventually they'd like to buy a house here, possibly in Church Hill.)

"We had a big beautiful house in the suburbs," says Donahue, who has an eternally bubbly outlook on Richmond. "But I felt sort of isolated in the suburbs. The shininess of everything wore out very quickly." She's lived in Baltimore, Dallas, Montgomery County, Md., and Newark, Del. After apartment-shopping in Richmond for a day and a half, she settled on the Atrium Lofts in the former Richmond Cold Storage building on 18th Street, just north of East Broad.

Jefferson Park, across the street, is perfect for her dogs — Roscoe, a brown terrier mix and Sampson, a white, curly tailed bichon frisé — and everything she needs is a short bike ride or walk away — the grocery store and gym on Main Street, and the restaurants and bars in the Bottom.

"I'm sort of past the age of staying up all night, sowing my oats," she says. Most of her neighbors are medical students, who aren't generally the hard-partying type, which means she can work into the night without disruption. But she lives on 18th, the gateway into East End and the public housing projects, and the city jail.

"I know it has its rough edges," she says. "It's like New York City outside my windows sometimes. A lot of the ambulances use 18th Street ... and there are so many cop cars." But she still loves her 550-square-foot loft — and the Bottom.

"If you are going to live in a city," she says, "noise comes with that."