Lost in the Supermarket 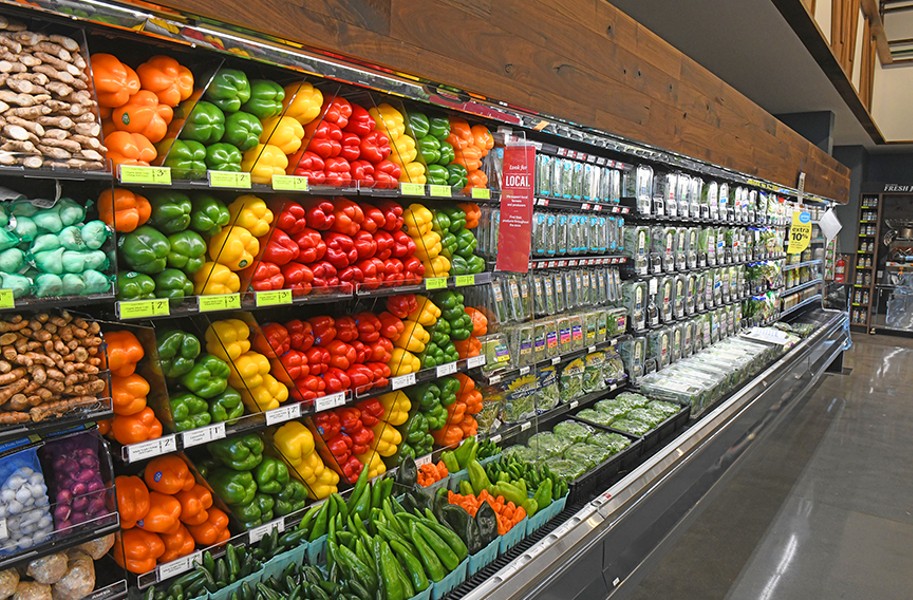 Whole Foods’ 510th store may be the second location in the Richmond area, but it’s the first to hit all the right local notes. Although plenty of other grocers have tried, this Whole Foods may be the first to pick up where Richmond’s famed Ukrop’s left off.

For those who don’t remember Ukrop’s Super Markets, which closed the last few stores in 2010, the stores commanded fierce loyalty among customers. The small grocer set national industry trends, like prepared meal offerings. And the service was exemplary — I once left a bag of shrimp behind at the checkout and a Ukrop’s employee delivered it.

The bar is high, but Whole Foods is working hard. It’s obvious it understands how proud we are of our city. The name Richmond pops up all over the 47,000-square-foot store, even spelled out in massive letters along the back wall. Stand-alone displays feature local products, along with photos and brief stories about more than 100 Virginia-based producers including Navy Hill, Blanchard’s Coffee Roasting Co. and PastryBase.

A handy Pulse stop is right across the street. Shoppers can serve themselves local beers and wines from the upstairs taps and drink as they shop. The outdoor mezzanine dining area features a mural from local artist Emily Herr, partially blocked by a big-screen TV.

Whole Foods regional specialty coordinator Dana Stanley has carved out a section of the wine department to showcase wines marked as “low intervention.” Apart from Tyson’s Corner, Richmond is the only store in the entire company testing this display concept.

“Low intervention is kind of a blanket term,” Stanley said last week as she unpacked boxes and arranged bottles on the shelves the day before the store opened. “We source these wines based on my knowledge of the producer, and it’s mostly organic grapes, little or no sulfites, many are bio-dynamic wineries.” Judging by the recent sold-out lecture from natural-wine expert and writer Alice Feiring, Richmond has a growing enthusiasm for natural wines.

Whole Foods hired Ukrop’s alum Bill Balderson to run the Broad Street location. In his more than 30-year career with Ukrop’s, Balderson helped open the Carytown and Virginia Center Commons locations. After Ukrop’s closed, Balderson worked for a large national chain. His eyes twinkle under a shock of white hair when he talks about joining Whole Foods.

“I had to get back with a company with a focus on both food and people, just like Ukrop’s used to have,” Balderson said. He grinned and looked around at the room full of shoppers. “It’s awesome for the city, we’ve had so many people coming by here on their evening walks, asking if we were open. I’ve given quite a few personal tours.”

On Thursday, Jan. 30, hundreds of shoppers brave below-30-degree temperatures to stand in line for hours at the store opening, fortified by free Blanchard’s coffee and Brekkie waffles. Liz Hunt arrives shortly before 6 a.m., and stands outside until store management invites her and a few others to wait in the heated foyer.

“I shop everywhere because I love grocery shopping,” Hunt says, flashing a wide smile and tossing back her long brown hair. “Costco, Trader Joe’s, Kroger, Whole Foods, Publix. I like Ellwood’s but their parking lot is crazy.” She says she planned to shop at both Whole Foods locations, since she lives near one and works near the other.

Hunt and other shoppers waiting in line talked about noticing a recent shift at Whole Foods, which has sometimes been called “Whole Paycheck” due to its high prices.

“If you can hit their [Amazon] Prime deals, it’s good,” says David Johnson, who leaned on a cane and blew on his hands to warm them as he waited a little farther down the line. “We came to check it out. I shop at Walmart, Aldi, Lidle, anywhere I can get a bargain.”

A Whole Foods spokesperson confirmed that the store has made a concerted effort to lower prices and make the shopping experience “more approachable.”

Where Whole Foods may not hit Ukrop’s is in caring for its 165 full and part-time downtown employees. You’d be hard pressed to get any criticism from former Ukrop’s employees. But Whole Foods has faced complaints from labor unions for unfair employment practices and from Oxfam for not doing more to improve labor conditions at the farms and producers that supply the company.

Whole Foods plays up its support for these local producers, several of whom were on hand at last week’s opening.

“We come to all the East Coast store openings,” says Nick Wright, representing Severino Pasta Co. in New Jersey. He stood by a case full of colorful fresh pastas and ravioli. “The owner started this company in a garage in 1971 and he went into Whole Foods 22 years ago. Now we’re global with them.”

“Whole Foods is amazing to work with,” she says, smiling and offering logoed, insulated tote bags to shoppers. “We launched with them in October 2018 with three [products]. They’ve helped us grow brand awareness, they invite us to events at headquarters and preview parties at stores. It’s really a feather in your cap to be in Whole Foods. It gives you credibility with other retailers.”

At the opening, dazed shoppers stroll the aisles, ogling the carefully curated displays. Staff members encourage shoppers to taste everything, even offering to open closed packages. Ukrop’s departure may have left downtown Richmonders hungry, but on Thursday there was plenty to eat.