Sudanese Lost Boy Awer Bul premieres his documentary about the life of the refugee. 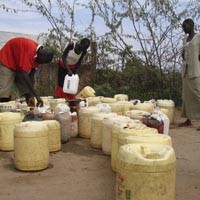 Even in a city as small as Richmond, few people can say they're the only ones to do something, see something or be something. Sure, sure, everybody's special and unique, but most of us live within a range of experience that's familiar to most.

Awer Bul has lived here since 2004 and certainly has those experiences too, now, but he's also often an “only one” in a crowd — he's one of Sudan's Lost Boys, fleeing the two-decade civil war of that nation to a refugee camp in Kenya. There, his art opened lines of communication with aid workers and led him here, to Richmond, where Bul's art leads him back, again and again.

Bul sells his art to pay for trips to that refugee camp, where more than 70,000 people live with a horrific lack of food, shelter and infrastructure. Bul recorded these struggles, and his own introduction of art to the children there, many of whom were born in the camp, in his documentary “Blood is the Same,” which premieres at the Virginia Holocaust Museum on Sunday, Feb. 1.

Bul will introduce the film and discuss the role of art in his life and in the life of the refugees, and will participate in a Q&A after the 2 p.m. free screening. Call 257-5400 or visit www.va-holocaust.com.