From Monument Avenue to City Hall: Why does Richmond continue to stifle artistic expression? 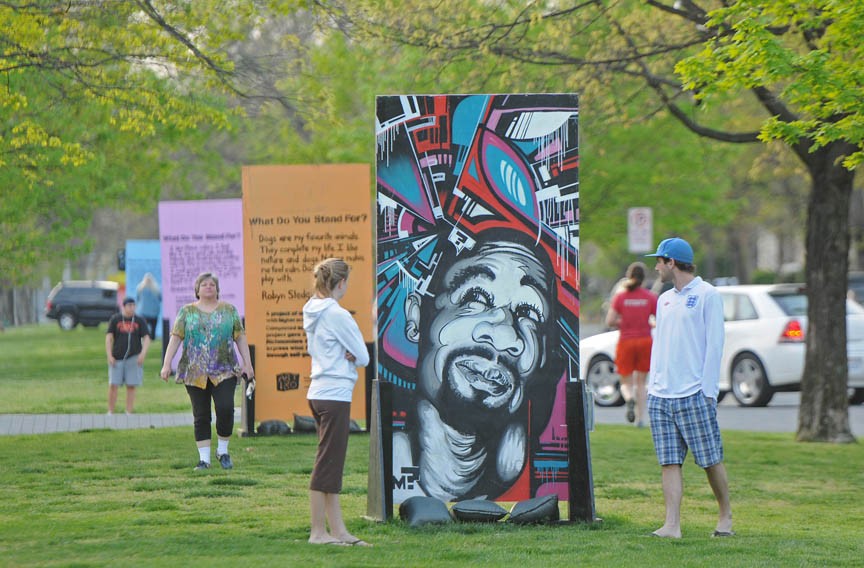 The city wanted to be a Capital of Creativity. So it plastered "ART RVA" banners all over downtown — shortly after announcing it would crack down on building code violations in the yet-to-be drawn arts district.

Last spring the city blessed a well-sponsored project to paint murals on buildings along Broad Street. But no one asked the architectural-review body, which freaked out over paint on pristine bricks.

Last week city officials caused a furor after they revoked a permit — granted by mistake, they said — for portraits painted by fifth- and sixth-graders to be displayed on the Monument Avenue median. Around 400 people showed up April 3 to support Art 180, the nonprofit that arranged the exhibit. It's called "What Do You Stand For?"

"In terms of the controversy, Richmond's a funny place," muses Albert Walker, a member of Art 180's program committee who joined the protest. "That's the only thing I can say — it's a funny place." The crowds here on this night illustrate that a lot of people want to see art thrive in Richmond, he says. Yet the paintings are being taken down.

He praises the bright panels on the median: "Makes Richmond look like a world-class city, you know? Progressive."

The Tuesday rally isn't so much a raucous protest of the Man as much as it's a few hundred people who don't seem surprised that the Man screwed up again.

"I have just been heartbroken by this," says Sara Fought, an art teacher at Linwood Holton Elementary School who's worked with Art 180 for years. Why is there such a controversy over kids' art? Fought asks. The city doesn't have to remove the exhibit, she says: "It's just a rule. They could just waive it and be done with it."

Indeed, even longtime Monument Avenue doyenne Helen Marie Taylor is fine with the murals — for a brief spell, at least. This is the same Taylor who fought the city's attempts to pave over the avenue's Belgian blocks in the 1960s to speed up traffic, and instructed a former city manager to not to plant tulips in the median ("I said absolutely not. It's not a tulip street," she scolded).

As for the murals, Taylor says having them up for Easter Sunday "might be fun," although they shouldn't stay long.

"Monument Avenue is really an international boulevard," she says. "It was born of defeat, for heaven's sake."

Hamilton Glass, one of the adult artists whose work stands on Monument, says the controversy is "ridiculous." But, he says, "I'm so used to things happening like this that it's not surprising to me."

Glass had his own run-in with the city less than a year ago. In May, while teams of artists — including Glass and Ed Trask — worked on large murals along downtown Broad Street, members of the city's Commission of Architectural Review were aflutter. The commissioners had just learned that three of the murals lay within an official old and historic district, in which they must approve any visible changes to buildings. And two of the murals had been painted on brick!

The muralists were no renegades. The city had given the OK to the beautification project, and several big names supported it: Altria, Venture Richmond, HandsOn Greater Richmond and Johnson Inc. But somewhere along the line, the historic-district requirements had been overlooked.

In July the commission decided to spare the murals — with some stern words about desecrating old brick. Glass' work, however, was taken down because the building it was attached to, at Brook Road and Adams Street, was being sold.

Trask was back in front of the Commission of Architectural Review last month, arguing on behalf of the G40 Art Summit, the massive mural-painting endeavor going on this month. Trask says he agrees with some of the historic-preservation principles the commission stands for. "But my God," he says, "some of those regulations. … There's got to be a way to come in and get a variance, an easier way to get a variance."

It took months to get all the necessary permissions for the RVA Street Art Festival, which begins April 13 and benefits Art 180. Participants will be painting murals on the old hydroelectric plant along the Canal Walk and on banners hanging from the flood wall. Trask says organizers had to appeal to the city Department of Public Utilities, the city riverfront committee, Venture Richmond and the Army Corps of Engineers, among others.

The problem is communication, Trask says. Departments don't always talk to each other, and if an art project doesn't have powerful allies, it's difficult to push through.

Even with the support of sponsor Altria, Glass has been unable to find a home for the mural that was taken down — a 60-foot-long homage to Richmond theater history. "It's in storage right now," he says. "I have no idea where."

It's especially difficult to watch visiting artists painting murals as part of the G40 Art Summit, he says: "It's awesome looking, but it's bittersweet to me." He asks why permission is expedited for outside artists when Richmond artists struggle to get shown.

"I've been trying to find places [to paint] for a while with no help," Glass says. "Everybody's scared of the city."

In Glass' hometown of Philadelphia there's a simple way to create public art — legally. Founded in 1984 to deter graffiti, the city's Mural Arts Program has become the largest public art program in the nation. Muralists can apply for funding and space through the program — but the process is tightly controlled, Glass says, and an artist is likely to find himself working on someone else's project.

Trask, along with Art 180's Marlene Paul, spent four days studying the Philly program. He suggests that Richmond needs an independent booster group to attract, review and support public art. Something like that needs to happen, he says, "because it's like the Wild West right now."

Richmond does have a little-known city group called the Public Art Commission. It's best known for its administration of the Percent-for-Art program, which dedicates 1 percent of the budgets for city capital projects to a piece of public art. But the commission also oversees things such as the Art 180 installation — or it should have, says its chairwoman, Sally Bowring.

"This is a perfect thing the Public Art Commission could have OK'd and supported," Bowring says. "If it's on city property … yep, it should be coming to us."

The commission is trying to raise its profile by re-branding itself and placing informative labels with a new, enigmatic pigeon logo on all 46 public sculptures, Bowring says.

But that doesn't solve the city's real problem: that creative people think their big ideas are being stifled and frustrated.

Maybe the solution is for artists to keep doing what they do best: ignore the rules and regulations. "I think there's a happy medium," Trask says. "You have to play the game. And you've got to be, 'Well, I'm going to do it anyway.'" S