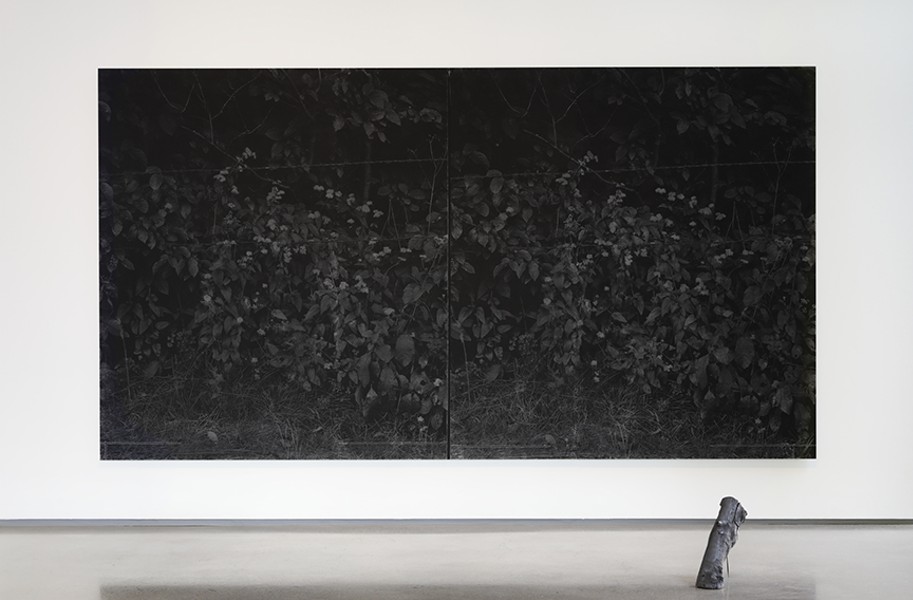 Starting with a clear sheet of glass and a blowtorch in the museum’s loading dock, multidisciplinary artist Harold Mendez’s approach to creating a new commissioned work for the Institute for Contemporary Art won’t likely be copied anytime soon.

With the blowtorch burn giving the glass a sooty blackness that paint could never achieve, Mendez moved the work into the institute’s first-floor gallery, projected a photograph onto the pane and carefully chipped away at the soot to copy the projected image. Through Mendez’s efforts, the dark window now has a transparent image that reveals the wall behind it. That image is one with special resonance to Richmonders in 2021: a monument under a tarp.

To Dominic Willsdon, executive director of the ICA, this piece is representative of Mendez’ work, which often includes themes of embodiment, permanence, memory and vulnerability. Should someone wipe their hand across the glass, Willsdon says, this image of a monument would smear. The work is now on display as part of Mendez’s exhibition “Let Us Gather in a Flourishing Way” at the institute.

A first-generation American with parents from Colombia and Mexico, Mendez often works with reclaimed items and found photographs to explore alternative narratives. A photograph of a sylvan scene, for instance, is reworked to emphasize the barbed wire running throughout the frame, lending a sense of menace.

Found hunks of trees that have wrapped themselves around metal pipes and fencing, warping both materials in the process, are also part of the exhibition. In his most striking example, “American Pictures,” a portion of tree encasing a thin pipe has been painted deep red with cochineal, evoking a flayed torso. 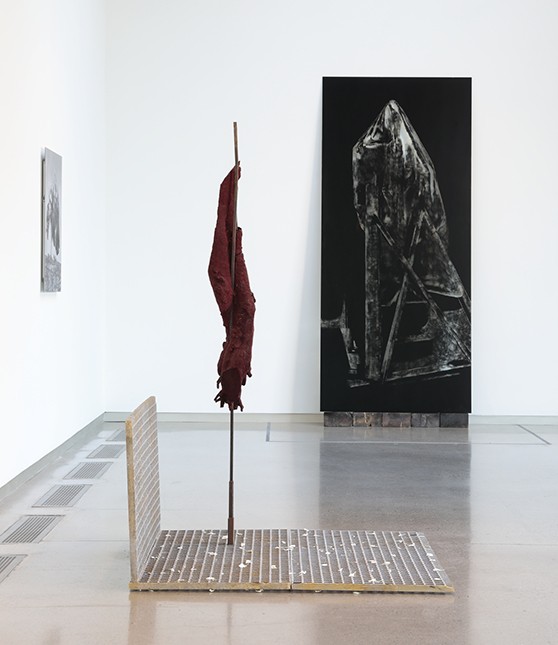 “There’s sort of a sense of loss and melancholy that people feel,” Willsdon says. “There’s a sense of passage of time and potential loss or real loss, and the presence of the body.”

Curated by Jamillah James at the Institute of Contemporary Art, Los Angeles and coordinated for Richmond’s ICA by Willsdon, the exhibit travels through a decade of Mendez’s work, raising questions of history, race and geography. Willsdon says his work taps into many of the Richmond institute’s ongoing curatorial interests, such as migration and cultural connections across borders.

Color also plays an important role in the show. Reflecting on viewing “Let Us Gather” during its first exhibition at the Los Angeles institution, Willsdon says he thought all the works were black and white at first. With time, the muted, melancholy colors of Mendez’ work reveal themselves to the viewer.

Some of Mendez’ sculptures are adorned with carnation petals, which will be continuously refreshed as they brown with age. Willsdon says Mendez was “interested in what it would mean to add something to a sculpture that meant that the museum had to care for the sculpture.”

Noting that the ICA’s exhibit in this space a year ago was almost entirely screen-based – “The Otolith Group: Xenogenesis” – Willsdon says this exhibition may have a broader appeal in the deep pandemic.

“This is a good show to be presenting when we’ve all been looking at our screens too much [because of] the slowness, the texture, the way in which you’re experiencing something in space and with things relating in space.”

“Harold Mendez: Let Us Gather in a Flourishing Way” runs through June 27 at the Institute for Contemporary Art at 601 W. Broad St. For information, visit icavcu.org or call 828-2823.