The days of pushing a controversial bill through the General Assembly under the radar, or keeping the privacy of a woman’s health choices between her and her doctor — are long over. 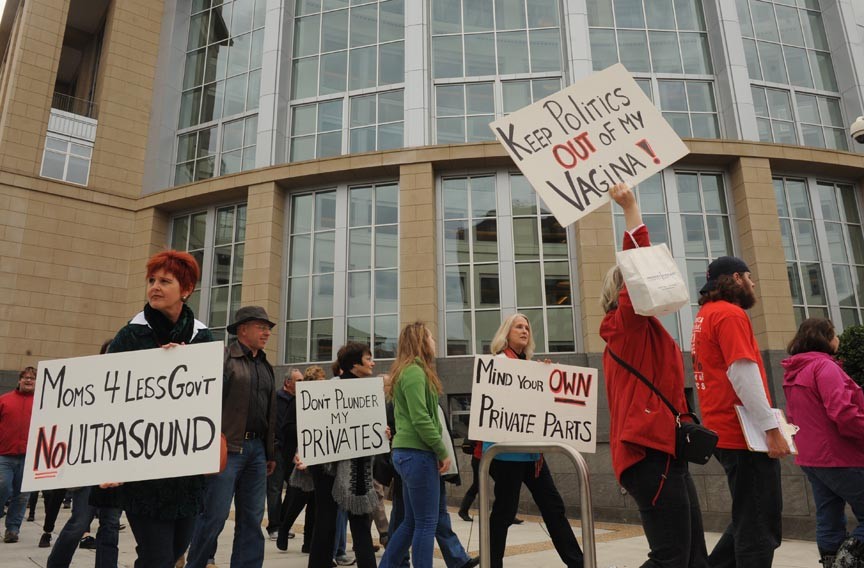 "There can be no understanding between the hands and the brain unless the heart acts as mediator." — Fritz Lang's "Metropolis" (1927)

However well-meaning or noble their purpose for proposing the personhood and mandatory ultrasound bills, the members of the Virginia General Assembly should kick themselves for setting the pro-life movement back to the Stone Age.

As Brian Doyle-Murray mused in the film "Christmas Vacation," something that looks good on paper can in the end hurt people you depend on. These two bills indeed may have looked good on paper and comprised only 2 percent of the legislative agenda, but the proponents failed to see and prepare for the unintended consequences of picking a fight with such grandstanding bills — namely, the massive amount of negative publicity they generated.

The ultrasound bill that Gov. Bob McDonnell signed into law March 7, sponsored by Delegate Kathy Byron, R-Lynchburg, requires that a transabdominal ultrasound be mandated prior to an abortion and the woman be offered an opportunity to view the image if she chooses. The vote was stalled for days while pro-choice advocates devised creative, even outlandish tactics to derail the bill, and pro-life advocates scrambled to secure the 20 minimum votes to ensure the bill's passage — giving a hint of the tempest to come.

"Virginia's Republican governor is poised to sign a law forcing (italics mine) women to have an ultrasound before an abortion …" reads the first line of the Reuters news service story on the bill's impending signature. Never mind that Planned Parenthood and almost every other lawful abortion provider already give ultrasounds to women getting abortions.

At its core the ultrasound law is the very type of government "forcing" (read "meddling") for which many conservative Republicans similarly criticize the federal Health and Human Services Department — mandating that Catholic hospitals and charities provide free contraception against their moral consciousness. Both are involuntary, forcible mandates, and there's an appalling lack of ethical consistency on both sides of these issues. If the federal government's forcing a Catholic hospital to offer free contraception is unacceptable, then so is a state government's forcing a woman to get an ultrasound, period.

Behind the histrionics there's indeed a lot for pro-life supporters to like in the new ultrasound law. Its intention is the safety and informed consent of the mother and the life of the unborn child. Shown an image of the life inside, it is hoped that women will fully understand the decision they're making for what it entails for her child and her own well-being. Despite the lies and misinformation disseminated, the law allows women to choose the facility that performs the ultrasound, whether it's in a physician's office, a pregnancy resource center, or even Planned Parenthood.

Still, if you win the heart, then you win the mind. The ultrasound bill didn't win the hearts of the pro-choice crowd, choosing instead to enact a Big-Brother-style, sledgehammer mandate that was widely misinterpreted, misreported and whose protests were widely documented. No amount of explanation of the merits of the bill can replace the images of burly state police in full SWAT gear manhandling women down the Capitol steps, whether or not they should have been there. Long lines of protestors holding silent vigils, active Facebook pages and signed petitions protesting these "attacks on women" receive daily, even hourly exposure at the expense of pro-life supporters relegated to the rear of the publicity bus, no matter how earnest or common-sense their arguments may be. In the minds of many, pro-life supporters now are forever associated with the bullying, over-reaching tactics of the Capitol and state police, physically and metaphorically willing to swing billy clubs and drag women down the stairs to keep them in their places.

The days of pushing a controversial bill through the General Assembly under the radar, or keeping the privacy of a woman's health choices between her and her doctor — are long over, confirmed by the recent Sandra Fluke-Rush Limbaugh controversy. Both sides of the aisle failed to recognize this. Limbaugh was right in apologizing to Fluke for his comments, but it was Fluke who made her sexual activity a matter of national debate by insisting that the U.S. government pass laws forcing (italics mine) employers and insurers to provide her free contraception — her own sledgehammer approach to her personal financial difficulties, which failed to win the hearts of her detractors.

And those clamoring for Limbaugh's head also should clamber for the heads of Bill Maher, Ed Schultz and others on the left who leveled even more scurrilous attacks on Sarah Palin, Michele Bachmann and Ann Coulter, including the hypocrite John McCain who was silent during those attacks on his own vice-presidential candidate. Again, there's an appalling lack of ethical consistency.

The General Assembly and pro-life supporters need to be open to approaches that educate and inform, and not place their bets on some bill that came out of a legislative committee that in turn creates so much divisiveness with its forcing. Ultrasound opponents, however, equally should be against Kathleen Sebelius, the secretary of the Department of Health and Human Services, who wields almost unimaginable power. Sebelius is fond of telling faith-based schools, hospitals and educational institutions that they "must" provide a service contrary to their moral conscience. The General Assembly, as well as the Obama administration, may be winning their respective battles, but they're losing something more important — the hearts of everyday voters. S

Dale Brumfield is an author and writer living in Doswell.