In a decade, all of Richmond's Civil War sites will be protected — or obliterated. 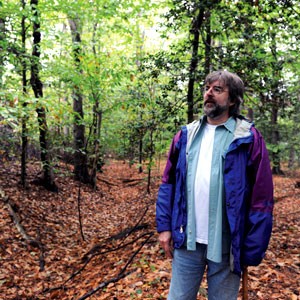 It's Aug.16, 1864. Confederate soldiers, sweating and slapping mosquitoes, are crouched in the trenches at Fussell's Mill, a small homestead southeast of Richmond. They scan the woods for Union troops, who crossed the James River at Deep Bottom two days ago and began marching north.

A quarter mile away, shots ring out. The Union soldiers have broken through the defensive line. There's not much ground left between them and their ultimate goal: the Confederate capital.

But as soon as Union troops pour into the gap, Confederate commander William Oates' forces charge and push them back out. Oates loses his right arm to a Yankee MiniAc ball in the process. (Don't feel too bad for him; Oates would later marry a beautiful woman half his age and become governor of Alabama.) The Union forces retreat back across the James.

Fussell's Mill fades into obscurity. The defenders' trenches slowly fill with earth and leaves, becoming shallow ripples on the land. The mill collapses into a pile of mossy bricks. Most everyone forgets soldiers ever stepped here. Which is exactly why the Richmond Battlefields Association, a local nonprofit, bought it.

For 11 years, the association has doggedly pursued one purpose: buying up all the threatened and forgotten Civil War battlefields in the Richmond area before they can be developed.

The sites that are part of the National Park System are often just small pieces of a battlefield, says association President Julie Krick. At Cold Harbor, southeast of Mechanicsville, just a third of the original battlefield has been preserved, she says. Less than 10 percent of nearby site Gaines' Mill has been protected.

“They call our current time the second golden age of battlefield preservation,” says Ben W. Brockenbrough, chairman of the group's properties committee. The first golden age, he says, was in the 1880s and 1890s, when nostalgic, aging war veterans had the money to buy the battlefields upon which they fought. The current age was sparked, some believe, by Ken Burns' 1990 documentary series “The Civil War,” as well as the tightening development pressure on the little land that remains.

Brockenbrough says time is running out. He estimates the association has about a 10-year window to acquire the remaining significant battlefield sites, or lose them to development. The process has already run its course in Northern Virginia, Krick says. Look at Manassas, she says: “It's done.”

A 1997 National Park Service report counted 384 significant Civil War sites in the United States. Virginia has nearly a third, 123; 15 have been lost, altered beyond recognition.

According to historian Louis H. Manarin, Henrico County was the site of more major Civil War battles than anywhere else in Virginia. Many privately owned battlefields are in eastern Henrico, Brockenbrough says, and have been owned by county families for generations.

Fussell's Mill was a big win for the association. After two years of negotiations, the nonprofit bought the site in three pieces, the most recent in September 2010. “This was a case where a private entity was going to have to come in and preserve it, or it was going to be lost,” Brockenbrough says.

But they're not always so lucky. Construction equipment is parked along nearby Long Bridge Road, where the land surrounding a Confederate fort has been purchased by a residential developer. He's planning to build 646 luxury houses, along with two pools and a cabana, in a development called the Ridings at Warner Farm. “They're marketing it as a Civil War estate,” Brockenbrough says.

The developer, Robert M. Atack, promised the county that he would set aside 2 acres to preserve the fort and surrounding trenches, with a parking area and historical marker. Atack also agreed to consult with Henrico parks and recreation officials if any historical artifacts are found during construction.

Another build-around-it approach to preservation can be seen at Fort Wead, a Union fort that's smack dab in the middle of a tidy Chesterfield County subdivision. Neighborhood kids sometimes use the earthen walls of the fort as ramps for their bikes.

The association's worst nightmare is a place such as Brook Hill, near the intersection of Parham and Brook roads in Henrico. There, earthworks are almost entirely hemmed in by the Brook Run Shopping Center and other commercial development. “It doesn't feel like a historic site when you go there,” Brockenbrough says.

Unlike its national counterpart, the Civil War Preservation Trust, the Richmond Battlefield Association doesn't have the resources to pay millions for land. But, with private donations and a $500,000 bequest from the late historian Brian Pohanka, the association has acquired eight or nine sites in the last decade. Currently focused on the Cold Harbor area, the group is negotiating the purchase of a property at Gaines' Mill that's adjacent to Park Service land.

Do we really need to preserve every single inch of trench? Richmond was, at the time of the Civil War, one of the most heavily fortified cities on the planet. Already, it will take you an entire day to visit all 13 sites in the Richmond National Battlefield Park.

Board member Bernie Fisher explains it this way. “To understand the fighting and what happened, you have to be able to walk the ground. … You get a real sense of what happened, and why it happened. It was our great national struggle.”

Brockenbrough points out that many of the earthworks and forts were constructed by slaves and free blacks, and serve as a reminder of “the continuing injustice” they faced. He believes the preservation of Civil War sites, and the excavation of places such as Lumpkin's Jail, is a way to get people talking about history.

The association doesn't want to be a long-term landowner, Brockenbrough says. When possible, the group sells its property to local governments or the National Park Service, usually at cost.

Some sites, like the 30 acres at Fussell's Mill, the park service can't accept because of federal restrictions. “In this case, we will hold onto it for as long as it takes,” Brockenbrough says. “We may hold onto it forever, for all we know.”