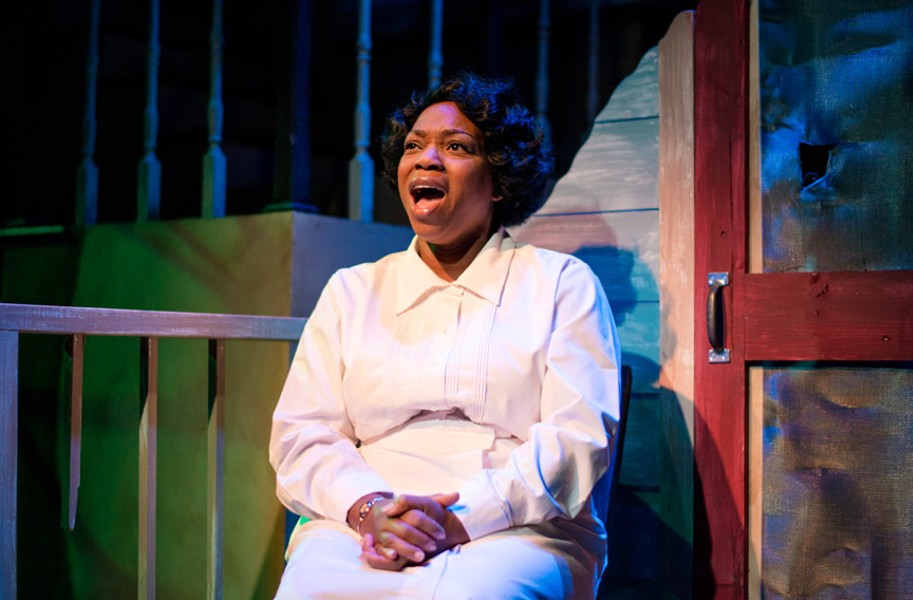 Behind the red marquee of the Virginia Repertory Center on Broad Street, an intriguing juxtaposition is taking place.

In the building’s November Theatre, “The Whipping Man” explores Southern Jews in the immediate aftermath of the Civil War. Across the hallway, and a century later in setting, the musical “Caroline, or Change” transports audiences to the home of a Southern Jewish family in the 1960s.

Slavery’s impact on society is still easy to see in the musical by Tony Kushner and Jeanine Tesori, which blends elements of blues, Motown, spirituals and klezmer music. As with his Pulitzer-winning opus, “Angels in America,” Kushner’s book uses fantastical elements to explore serious cultural problems — in this case how a bankrupt economic system has continued to disempower blacks.

When we first meet Caroline Thibodeaux (Desiree Roots), she’s sweating her way through another day’s laundry in the basement of the Gellman household, joined in song by the Washing Machine (Karla Brown), the Dryer (William A. Anderson) and, appearing as the Supremes, the Radio (Carolyn Minor-Daughtry, Katrinah Carol Lewis and Jessi Johnson).

In any other musical, this would be the moment where Caroline would launch into a tear-jerking aria, but Kushner avoids scoring easy points with his audience. Instead, we’re given a sense of Caroline’s hardship and that the calluses on her hands parallel the ones on her heart. As Caroline, Roots brings powerhouse vocals and a fierce sense of dignity to the role.

One of the few instances where Caroline lets her guard down is with the Gellman’s son Noah (Brandon McKinney), but it’s hardly a Hallmark moment — she lets him light her daily cigarette. Quiet and shy, Noah has kept to himself since his mother died and his father remarried. The two characters are intrigued by each other and Noah longs to be a part of Caroline’s family.

It’s with Noah that Caroline reaches her breaking point in the musical. After Caroline is instructed to keep any pocket change Noah leaves in his pants to teach him respect, the two engage in a shouting match over a $20 bill he received from his grandfather. Almost every character discusses their relationship with money in the show, and the duality of the word change isn’t lost on Kushner.

McKinney proves a worthy opponent as the pint-sized Noah, and the scenes with Caroline’s children Emmie, Jackie and Joe (Tyandria Jackson, Sam Merkle and Donathon Arnold) are some of the show’s most fun. Under Ryan Corbitt’s musical direction, the cast is vocally impressive overall, backed by a small live band.

Chase Kniffen’s direction pulls understated performances from the show’s actors, but his set design seems a bit bland for the proceedings. Michael Jarrett’s lighting design has some kinks to work out on opening night, occasionally leaving performers in the dark.

Kushner’s decision to focus on an ordinary black woman away from the front lines of the civil rights movement is an unconventional and admirable choice for a musical. But perhaps focusing so much on one individual doesn’t play to his strengths as a writer. In his complete avoidance of clichés, he’s also made it difficult to fully identify with the characters involved, and while well-constructed, the show feels a bit cold.

Kushner seems better at telling stories with a broader scope — perhaps this canvas isn’t large enough for the picture he wishes to paint. S