Kate Bollinger’s new EP, “Look at it in the Light,” illuminates a moment of personal and professional transition. 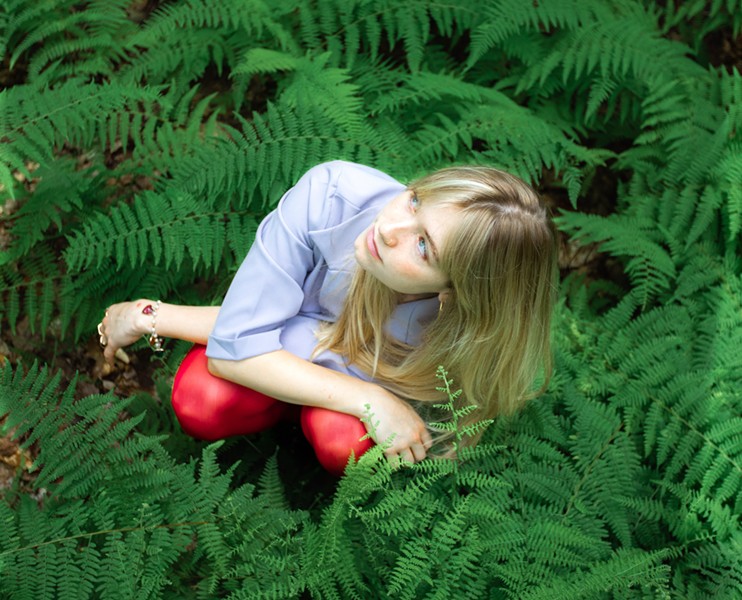 Kate Bollinger is taking off — in more than one way.

The versatile Richmond indie singer-songwriter’s career is accelerating. Her latest EP, “Look at it in the Light,” is her first to be released on the well-known independent label Ghostly International.

She’s provided tour support for national acts like Real Estate and Faye Webster, and she’s made a regular occurrence of co-writing with Matthew E. White, founder of the influential Richmond-based studio, label, publishing and management group, Spacebomb. The rapper Ye (formerly Kanye West) even credited her with inspiring the chord progression for a song on his 2021 album, “Donda.”

Take a spin through “Look at it in the Light” and you’ll hear a performer who is going places, but who is also considering literally going someplace else.

Central Virginia has acted as Bollinger’s launching pad to this point. She grew up in Charlottesville, graduated from the University of Virginia in 2020 and lived there until moving to Richmond during the pandemic.

Hers was an especially musical home; she has older brothers who played in bands, and her mother’s work as a music therapist exposed Bollinger to the curative power of song, while also giving her opportunity to familiarize herself with the studio setting from an early age.

“I was always writing songs in my room, and my brothers were a lot louder about their songs,” she remembers. “It was more obvious what they were doing, while I was following in their footsteps a little bit.”

She then established a second home of sorts at the White Star Sound studio outside Charlottesville. Her latest release caps a string of three stylistically rich EPs that started with 2019’s “I Don’t Wanna Lose” and continued in 2020 with “A Word Becomes a Sound.” All were tracked at White Star, her latest around a year ago. Each represents a step forward in terms of artistry and intentionality, and the rapport she’s established with her band — particularly producer and frequent collaborator John Trainum — shines brilliantly on “Look at It in the Light.”

The weight of continuity has been building for Bollinger. With its mid-song left turns and lyrical restlessness, “Look at it in the Light” documents the swirling push-pull that results from peering over the precipice of change. “Wait for it,” she sings on her elegantly orchestrated song “Lady in the Darkest Hour,” before continuing: “There’s an end in sight.”

Lately she’s been thinking about moving. “To New York or L.A., just to get out of Virginia and try living somewhere else,” she says. “Both of those places are obviously good for pursuing music and have a lot of people that I’d love to work with. But I do have a hesitancy and fear of losing the thing I’ve created here … at the same time, I think I have a sense of pride, where I want to prove to myself that I can make something special even if I go somewhere else.”

At several points, “Look at it in the Light” captures the aching stasis of ambivalence. On “Who Am I But Someone,” she’s fatalistic about starting and ending in the same spot, but you also hear her trying to break out of a loop: “Days go by, I feel the same / I don’t know when I’ll make the change.” Two songs later, she’s feeling the pace of life pass her by: “I wanna keep you pinned to my side / I don’t know what I’ll do otherwise” (“Yards / Gardens”). Opening track “I Found Out” cuts even closer to the core of indecision: “Without certainty, what would you be?”

“I love Virginia and I’m definitely going to come back to Virginia,” she says, "but I just feel like I need to go somewhere else and try some new things at some point. In music and in my own life, I’m worried I’m going to stagnate in some ways.”

She’s looking to explore new sonic territory, as well. “I really want to make an album that is genre-fluid and jumps all over the place, and involves a bunch of different collaborators,” she says.

Scan the liner notes of her three EPs and you’ll find a remarkable degree of continuity. There’s the consistent studio setting — White Star — in addition to a few key names that appear repeatedly. Chris Lewis’ next to guitar credits and Jimmy Trussell’s next to many of the bass ones. You’ll find John Trainum’s name even more frequently; the UVA classmate of Bollinger’s has contributed everything from guitar to synth to mellotron, as well as mixing and production. They’ve all played a part as Bollinger has established a distinctive and dreamily contemplative sound, and as she’s refined her voice as a writer.

“Those songs were totally different from what I’m writing now,” she says of the compositions that predated her work with Trainum and company. “They’ve really helped me find my sound and write in different ways. I’ve written a lot of songs with them, actually, especially with John — we’ve co-written a lot — and then with Chris, who plays guitar in the band.”

At the same time that she’s looking forward to branching out, she’s not eager to cast aside what’s worked thus far. “I don’t feel a pressure, necessarily, to ditch everything that I’ve been doing up until this point and replace it with something else.”

The ability keep rolling and to retain creative control was a prerequisite for partnering with a label. While those signings often throw new co-writers or producers into the mix, Bollinger praises Ghostly International’s light hand when it comes to guiding her process.

“I’ve really liked them,” she says of the label’s staff. “They’ve helped a ton with planning and obviously having more of a budget has been really great, but they haven’t over-involved themselves, which was really important to me. I didn’t want to work with a label that was going to be too creatively involved.”

Hitting the road is a chance to build on the past while embracing the possibilities waiting around the bend. She set out in February on a tour with Secretly Canadian signee Faye Webster, who inspired Bollinger on multiple fronts including songwriting, precision and stage presence. The significance of the latter set in especially deeply while sharing a string of April dates with French disco group L’Impératrice.

It hit her on the very first night of that tour: “I had this emotional experience watching them, because they are having so much fun onstage. They’re dancing around, and jumping around, and they have choreography, and it just seems like they love performing so much.”

That sense of enjoyment is something she’s hoping to incorporate more, as compared to the pressure she’s felt in the past to meet her own expectations.

“I realized that I can be kind of hard on myself when I perform,” she says. “I want it to be perfect, and seeing L'Impératrice play made me want to rethink the live show a little bit, and have more fun, and somehow make it less about me and more about the people that I’m playing to.”

Getting to look fans in the eye is something musicians everywhere have cherished anew since the pandemic’s pause on live performances lifted. There’s an added importance to making in-person connections for Bollinger, who has seen her streaming numbers skyrocket. (The Spotify play count for “Candy,” the song Ye used as source material for “Donda,” has surpassed five million.) At shows, those numbers turn into real faces, and while she had to cancel a planned European tour as a result of a recent dental emergency, she’s looking forward to an upcoming run of headlining shows where she’ll learn more about these loyal listeners.

“Because I’ve always been opening for a bigger band,” she says, “I really don’t have a sense of who my audience is, so I’m really excited to see everybody in June and meet everyone.”

She’ll head west to Cincinnati and Chicago, north to Montreal and down the East Coast for a few dates en route to the June 18 closer at The Southern Cafe & Music Hall in Charlottesville. That itinerary gives a whole other meaning to words from “Who Am I But Someone,” her new EP’s standout second track: “Who am I but the one /To start out and finish in the place I came from?” It’ll certainly make attending easy for her mom and dad.

“Both of my parents come out to my shows and are really supportive,” she mentions, before returning to circumspection around how far she’s come since writing songs in private at home. “It’s a weird thing to be doing… I almost wasn’t heartbroken over the fact that I would never be able to be a musician. It just seemed really impractical. I’m still surprised that I’m able to tour and make music as my job.”

“Look at it in the Light” is out now on Ghostly International. To stream or purchase, visit katebollinger.com. For tickets to her June 18 headlining show at The Southern Cafe & Music Hall, visit thesoutherncville.com. Doors open at 8 p.m. and the show starts at 8:30 p.m. Tickets are $15 in advance and $18 at the door.