Plan 9 Music calls for people to share their memories in the lead-up to its big summer anniversary. 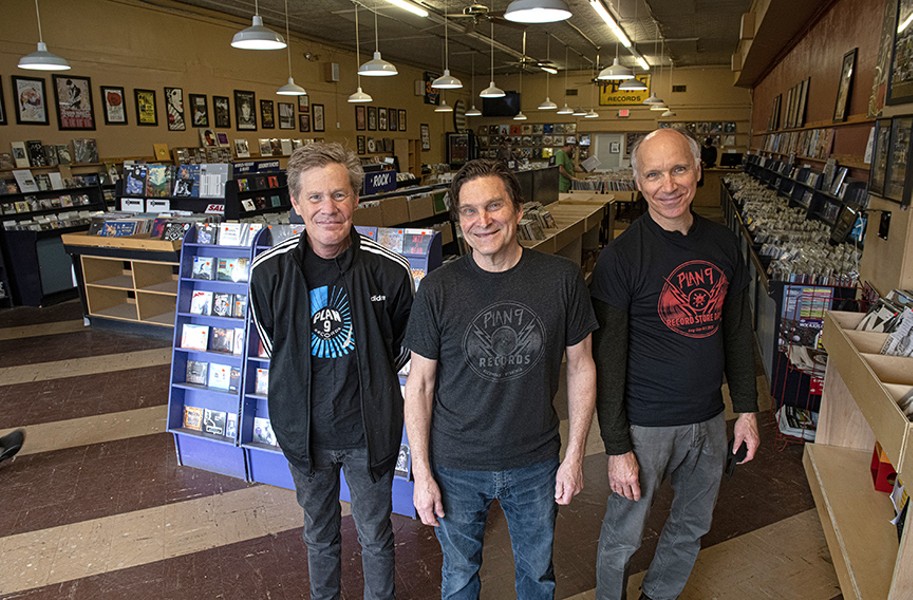 Scott Elmquist Buyer Bob Schick, owner and co-founder Jim Bland and acquisitions manager Jimmy Blackford have done more than anyone to help make Plan 9 Music a local institution over the past four decades.

Leaning back, Jim Bland remembers how it all began.

It was the early 1980s and he was still working at Album Den, a former local record store that always smelled like incense (and where, as a misguided child, I once bought an ‘Ozzy Osborne for president’ T-shirt). That’s where Bland met David “Petey” Kurzman, a regular customer who used to show old B-horror movies at his house.

Later on, Bland and Kurzman both wanted to open their own music store, so they pooled their tax return money, a couple grand maybe, and as many of their own records as they could bear to part with – plus records from about 50 friends to sell on consignment.

“At the time there were the Peaches [stores], the Strawberries, and we said, ‘We gotta have something different,” Bland recalls of how their store got its name from the low-budget, 1959 Ed Wood classic “Plan 9 from Outer Space.” “Something weird that said resurrection of the dead – or selling used records [laughs].”

Plan 9 Records was officially born on July 11, 1981, across the street from the Byrd Theatre in Carytown, where Citizen Burger resides today.

It lasted only a year in the original spot. The store then took over the lower floor of the building where Chop Suey is now, before moving across the street into the current Richmond Road Runner space and staying there over a decade. Then came a move next door to the much larger, 4,000-square-foot space where Mellow Mushroom now slings its pizzas. “We put a lot of money into that space and built it out, that was sort of the height of our sales,” Bland explains. “CDs were taking off as records grew fewer and went down into the basement. We were able to expand our catalog faster because CDs were the focus and we had the biggest selection at the time.”

But like they say, stuff is cyclical. Now records are back in full force and Plan 9 Music is back across the street at 3017 W. Cary St. The company, which has a sister store in Charlottesville, is turning 40 this summer and it remains an important music institution in Richmond, as well as one of an increasingly few American record stores that have weathered industry changes to reach middle age.

Not only has the business employed a lot of people over the years, including local musicians such as Mark Nelson of Labradford and Bob Nastanovich of Pavement, but it’s been a central hub for local bands to post flyers for shows.

“It was and still is a sort of community center,” says buyer Bob Schick, who has been with the store for 38 years and whose daughter Rosemary now works there part-time. Schick moved to Richmond from Indianapolis. “Plan 9 was a huge upgrade for me, I was thrilled. Because I liked a bunch of different kinds of music, not just hardcore punk [Schick was a member of Richmond punk legends Honor Role].”

Two former Plan 9 employees have opened their own shops: Jay Leavitt opened Deep Groove Records on North Robinson and former record basement dwellers, Marty Key and Drew Snyder, opened Steady Sounds farther downtown, which closed last year after a decade-long run. Plan 9 also had a satellite store in Midlothian for five years that did well – and for a short period, a shop at Virginia Commonwealth University.

Jimmy Blackford started working at Plan 9 in the fall of 1984 when Richmond was a very different place.

“It was more conservative, less diverse, fewer people were here that had moved from other parts of the country or Virginia,” he recalls. “But there were new styles and trends in music. … Cable TV and MTV really opened things up. It was a big cultural change. MTV was exposing people to stuff they weren’t hearing on the radio.”

Hired to buy used records and help customers, Blackford still does much of the same today as acquisitions manager, though his job requires him to travel well outside of Richmond to check out used record collections.

Staying open this entire past year, Plan 9 has managed the pandemic as well as any local retail business, with a few close calls but no shutdowns thanks to the diligence of employees and a strict adherence to allowing only 10 shoppers in the store at a time to allow for social distancing – which sometimes means long lines outside.

“Very loyal customers continue coming in,” Blackford says. “Perhaps being able to visit a source of familiarity has given them something to feel good about.”

“The customers have been fantastic,” Schick agrees, while Bland adds that people who miss live concerts could at least go buy new music – and many did.

However, the music retail industry still has not recovered from what Blackford calls the “two-headed monster”: the rise of downloads, and later online streaming, and the 2008 great recession. “The return of records has helped, but it’s not like happy days are here again, by any stretch,” he says.

Plan 9 declared bankruptcy in 2011 after being sued by a landlord, which Bland explains was more of a reorganization.

“I had already put a lot of savings into it. … [Bankruptcy] was just like getting started, it was a learning process.” Local lawyer Joe Liberatore helped the store get a reasonable payment plan. “We had to close stores, I had to lay off people who were like family members to me,” Bland says. “That was the toughest time of my life.”

“But it’s that kind of leadership that has to happen,” Schick says, crediting Bland with taking the initiative to save the business and later institute more effective budgets for buying music, which kept it alive. Within a few years, records started coming back, online mail order began ramping up, and annual Record Store Days helped.

Looking back, one of Blackford’s favorite live in-store Plan 9 performances involved the country singer James McMurtry, who came in on a Saturday afternoon, after buying a six-pack of Falstaff beer. “He stood up on the front counter [at the 3002 Cary St. store] and played for everyone there and it was just rockin’,” he recalls. “Sometime after that, No Doubt played the store and that was the most crowded I’ve ever seen it.”

It’s fond memories like these that Plan 9 is hoping fans will send in – photos, videos, articles, comments – so it can post them on the website during this anniversary year. “We would love to have more documentation of some of our in-store events,” Bland says, adding that it hopes to hold some actual celebratory events, maybe throughout the year, in honor of the 40th anniversary in July.

“I’m thankful we’ve survived this long and the community has been supportive – that gives us a sense of pride,” Bland says. “The survival has been a group effort, especially these two guys [Schick and Blackford] who have stuck with me so long.”

At the end of the day, love of music remains a guiding principle, just as it was in the early days. “We all enjoy sharing music with customers and each other,” Bland says. “It has always been really important.”

And you just don’t get that same feeling of community or engagement sitting at home and clicking “purchase” on a computer.

Send your own memories, photos or videos of various Plan 9 stores, in-store performances and events to celebrating40@plan9music.com to add to their archives.


Back to The Music Issue