Mainstream should pay attention to hospitality. 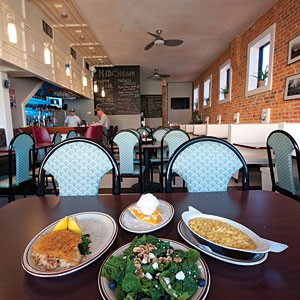 Writing about restaurants is, for the most part, an enjoyable experience. You get paid for going to new places, tasting new dishes and telling others about them. But there's also a responsibility to steer diners away from possible disappointment. Such is the instance with Mainstream, the latest eatery at the southeast corner of Main and Vine, which over the years was the site of Cirrus, Plaza Mexico and Dogwood Grille.

Competition is fierce in the Fan and the customer base can be fickle. To survive, it's helpful to establish a niche. So far Mainstream lacks an identity, among many other things — the exception being the dAccor, which was left intact from the previous occupant.

While acknowledging that free advice is usually worth what you pay for it, there are nonetheless some basic attributes of a successful restaurant. It begins with the greeting, or in the case of Mainstream, the lack of one. The bartender does her part, asking, almost in surprise, “Are you here for dinner?” but the owner, sitting at the end of the five-seat bar, never looks up from his computer. Not then, not ever. When we finish our meal 75 minutes later, neither of them says a word as we depart.

Except for three people at the bar — apparently friends of the bartender — the place is empty, and remains so when we leave at 7:45 on a Friday night. On Saturday night at 9:30 there are no diners, just two guys sitting at the bar. It was a fuller house for the Super Bowl. When we settle into a booth the waitress plops down two menus and announces that many of the dishes are unavailable because “the truck didn't come today.” That may have been another telltale sign.

The waitress returns quickly and asks if we are ready to order. Not quite. First, how about some utensils, water and maybe a drink order? Once that's remedied, we choose artichoke dip with spinach and melted cheese, which is hot, plentiful and tasty. This turns out to be the culinary highlight of the evening.

For entrees I pick one of the specials from a chalkboard: pork chops with mashed potatoes, gravy and a vegetable, a large portion of Brussels sprouts. My wife goes for the meatloaf, which comes with the same sides. Rather than being mashed, the potatoes are one huge lump, so hard they could break a plastic fork. The chops are thick, cooked to my order (medium) and topped with cranberries. Nothing much to complain about there. But my wife's meatloaf is — wait for it — a hamburger, studded with bits of red pepper. By then our chagrin has turned to laughter, so we charge a second glass of wine and ask for the check.

In the meantime I stumble through an unlighted passageway (there's a light switch, invisible in the dark) into an unkempt men's room where, among other problems, the motion-activated towel dispenser doesn't work, even after pounding on the cover. On the way back to the table I glance over the owner's shoulder and see that he's staring at a spreadsheet.

The check contains one final hit: I'm charged $15 for the pork chops, listed on the chalkboard at $14. Our departure provokes nary a peep from either the waitress or the owner, but maybe that was wise. They wouldn't have liked the answer to “How was everything?”

This review is no fun to write. While reviewers, including this one, are sometimes too picky about little missteps, no one enjoys savaging a struggling business unless it provides a wake-up call for change. Mainstream, which opened in November, might garner sympathy, if not understanding, about its shaky start if the owner hadn't appeared to be totally disengaged from his only diners. A “Come back soon” might soften the bad impression. S