The whimsical drawings of John Lennon make a stop in Richmond at Chasen Galleries. 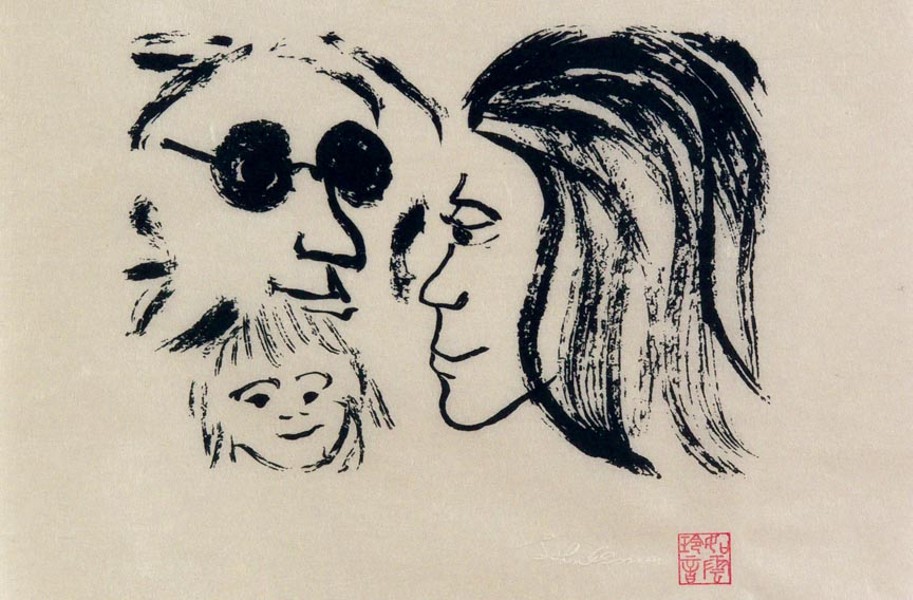 The drawing, “Family of Peace,” was made by Lennon in Karuizawa, Japan, in 1977.

He was one of the world’s most famous musicians in one of history’s biggest bands. But it was the visual arts that always came first for John Lennon.

That little band he co-founded, which changed the course of popular music, ended up getting in the way. But that the Beatles became so widely known allowed Lennon’s art, mostly quickly done drawings and sketches, to flourish most of his life.

“Absolutely, it was fortunate he remained an outsider to the art world because it allowed him to maintain his purity, free from critics and dealers,” says Lynne Clifford, curator for “The Art of John Lennon” exhibit coming to Chasen Gallery this week.

Lennon’s widow, Yoko Ono, has said that “along with his guitar, pen and paper, these drawings were really his ideal tools to grasp his emotions,” Clifford says.

Ono has drawings Lennon made when he was as young as 9, Clifford says, adding that the musician was later classically trained at Liverpool Art Institute from 1957 to 1960. “Of course, the music overtook that,” she says. “But once the Beatles broke up, he continued to draw.”

This exhibit features 72 artworks hand-chosen by Ono, including some first-edition prints done in 1987 which previously had sold out. The earliest piece is titled “Love Is the Answer,” from 1964 (it’s in Lennon’s first two books), and the drawings run up to 1980 shortly before Lennon was gunned down in New York by a deranged fan. The prints cost between about $600 and $7,000, Clifford says.

“They’re very autobiographical,” she says. “You get this overwhelming feeling of what it was like to see John Lennon aside from the music, the whimsical and intimate nature of how he drew Yoko with so much respect. There’s a whole series called ‘Real Love,’ where he sat with [son] Sean and drew with him. The earlier stuff in the ’60s is almost surreal, free-association work. His style changes right up to his death in 1980.”

Clifford was a publicist who first started working with Ono to present the art in 1986. “To sit with her and choose these images, I go from crying to laughter, you get chills,” she says. “She recalls where they were when he was drawing it, showing it to her, asking her what she thought. There’s a brand new edition called the ‘City of my Heart.’ It’s John and Yoko in front of the Eiffel Tower, on their honeymoon. John told her that most people take a photograph, but he wanted to draw them together. So every time she looks at it, the memory comes back.”

Clifford says one of her favorite drawings is called “Forever Love,” which features Lennon and Ono’s faces together. “On the drawing he wrote: ‘Born 1940. Lived. Met Yoko 1966.’ It’s such a love letter to her. Like his life finally began when he met her.”

From the beginning, her directive from Ono was to exhibit the pieces widely, having everyone enjoy the art, not just in big cities around the world. When the art visits each city, the curators always work with the gallery to pick a local charity to support. In Richmond the recipient will be FeedMore community food bank and kitchen. The exhibit is free but a donation of $5 is suggested.

Not all of the drawings are love letters to his family. One of the pieces, “Fame,” seems to be an early comment on celebrity-obsessed culture. The image shows Lennon and Ono running in different directions away from photographers and media. “The difference with them and most of today’s celebrities is they used their fame for good, turning it into the famous bed-ins and marching for peace,” she notes.

Clifford will be present for the entire exhibit and says her favorite part is the reaction she hears from people viewing the artwork.

“We were in this warm climate, a little 5-year-old boy came up to this piece, ‘Remember Love,’ which is basically white in the background, and one character is walking across the road to give another a flower. The boy asked his father to buy the piece. I asked him what he liked, he said, ‘I like that that man is walking across that road, giving a flower and saying I love you to someone.’ The little boy had never seen snow before, but it spoke to him.”

Regarding the future for the original drawings, Clifford can’t say what Ono eventually plans to do with them but she guesses it will involve a museum.

“One of my favorite quotes from John is, ‘If art was to redeem man, it could do so only by saving him from the seriousness of life and restoring him to an unexpected boyishness.’ And I think that sums him up and his artwork very beautifully.” S