Long-absent R&B singer D'Angelo will have a busy year, if all goes according to plan. 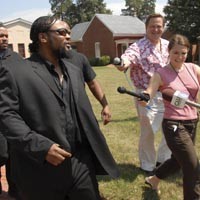 As Michael "D'Angelo" Archer faced legal problems in recent years that threatened to permanently derail his career, the promise of new material from the platinum-selling R&B singer seemed fragile. An album rumored to be called "James River" never surfaced. New music from the singer remained "in the works" and not in the stores. But earlier this month something happened. One of the three D'Angelo projects scheduled for this year actually came out.

"The Best So Far," a collection of songs from both of his previous albums, coupled with songs from soundtracks and a DVD of all his music videos, was released earlier this month. Later this year, deluxe versions of his debut "Brown Sugar" and the follow-up "Voodoo" are scheduled to hit stores. Predictably, these releases will cover a lot of familiar territory, without the slightest hint of what the singer sounds like now. One person who's heard the new music isn't telling much.
"He's written enough for three or four albums," says his manager, Lindsay Guion. The music industry veteran is quick to discuss the singer's new record contract with RCA, his recent weight loss and his studio work ethic. But if you want to know about the music, you'll have to wait.
"I'm not at liberty to discuss song titles at this time," he says.
The as-yet-untitled project features collaborations with producer Raphael Saadiq, John Mayer and Cee-Lo Green and is being recorded in San Francisco and Los Angeles. A single is scheduled for a fall release, with an album of new material to follow in early 2009. That would make four releases within a year for the singer, an effort that requires cooperation from different record companies, a committed artist and someone with solid connections to make sure everything's on point. Luckily, D'Angelo has that special someone.
Enter Clive Davis, a respected music industry executive who guided the careers of Janis Joplin, Bruce Springsteen, Alicia Keys and many others. Davis signed D'Angelo to RCA Music Group and J Records shortly after his most recent legal problems stemming from a 2005 car accident, concluded in a Powhatan County courtroom. With an industry heavyweight like Davis on his side and a new record deal, a career restoration seems entirely plausible, even though the legendary star-maker has since stepped down as the chief executive of Sony BMG Music Group.
Guion says D'Angelo has made some changes of his own since his 2006 court appearance, the last time he was photographed by the media. He's lost about 70 pounds, thanks to a regimen of weightlifting, diet and martial arts. Also, the 34-year-old singer, who often ran into trouble behind the wheel, now has a driver, he says.
"I think he's very focused right now," Guion says. "He looks good, he feels good and he's performing better."
Guion says the release of D'Angelo's older material will position the Pentecostal minister's son for a triumphant return.
"The timing was perfect for Virgin/EMI to release "The Best So Far,'" he says. "Once that happens, his audience is going to be ready for new music from him."
After almost a decade between releases, his audience is just hoping the new music will be ready.A,