Musician Joshua Quarles focuses on composing and engineering at home. 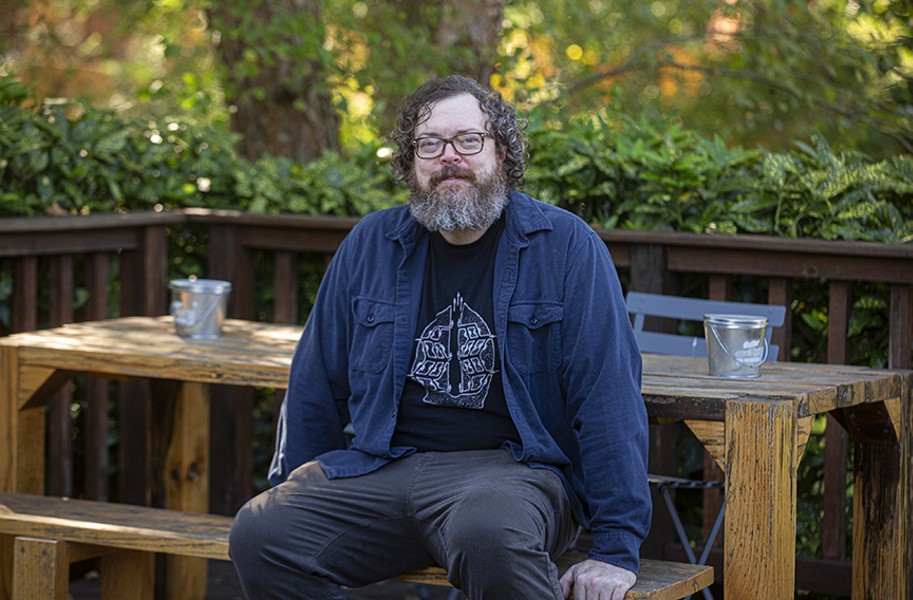 Growing up, music was all around the Quarles home.

Although no one was a professional musician, Joshua Quarles’ dad played classical guitar, his mom played piano and his brother played violin. There was always music from the radio in the kitchen or classical and jazz records playing on the stereo in the living room.

When Quarles was in sixth grade, his music class had a demonstration on wind instruments and he chose to learn clarinet. That lasted until his sophomore year of college when he decided to sell it for an electric guitar. By the mid-’90s, he was playing in his first group, a jam band called Stone Kitchen. It was also during this time that he got a four-track and began diving into the engineering side of music making by recording demos and creating his own arrangements.

After an extended break, he was inspired to learn to play the cello after hearing the soundtrack to the film “In the Mood for Love.” Once he started playing cello with local musicians Jonathan Vassar and the Speckled Bird, the Low Branches and Homemade Knives, he went on to produce and record two albums with the Speckled Bird and one with the Low Branches. “That really cemented my love of doing that kind of work,” says Quarles, who also helped write and produce “Make Noise,” an electronic pop album for Anousheh.

It was his wife, interdisciplinary artist Hope Ginsburg, who brought him into the world of visual artists, and soon mixing and composing music for art installations and performance becoming a big part of his musical work. After scoring sound and music for several of her video projects, his first full collaboration with Ginsburg came in 2018 with a project called Land Dive Team: Amphibious James.

“My part in that project was composing a 20-minute composition for nine wind instruments and then performing it as one of the clarinet players along the bank of the James River,” he says. This wind ensemble piece was combined with some live looping and the use of sampled field recordings, something he carried over into other projects.

Like many people when the coronavirus hit, Quarles was forced to rethink things and concluded there was no reason not to start his own studio to do composing and engineering exclusively. Through most of his music career, he’d worked in restaurants as a cook while yearning to do music and sound engineering full time. With the launch of his sound studio, he’ll offer media composing for sound installations, film, video and commercials, as well as mixing, mastering and producing. But he’s also offering his services as a musician who can add a range of instruments – guitar, bass, cello, clarinet, sax and synths – to any project that might need something more.

Quarles and Vassar began talking about collaborating again almost as soon as the Speckled Bird ended but life intervened.

“About a year ago, Joshua started sending me sketches he’d made with drum machines and some light instrumentation and I’d write the lyric and vocal and send it back,” Vassar recalls. “Then he’d add more instruments, spit and polish and really turn it into something great.”

After repeating this process 10 times, they realized they were basically making an album and Vassar’s lyrics had taken the shape of a narrative structure flowing through it. The project was dubbed “Lonely Rooms.”

“These lyrics were fairly raw, emotionally speaking, so we made the decision to keep the record in a fairly unpolished state as well, leaving in things like the original drum machine and keys parts, as well as outside noises, like crickets from when Jonathan recorded his vocals in the middle of the night on his porch,” Quarles says.

The song “Not for Nothing” was sent to Christina Marie, formerly of Low Branches and now frontwoman for Yeni Nostalji, for additional vocals, and Quarles says their voices sounded so good together that he knew they’d have to get her to sing on several more.

“The album was basically written before COVID hit and would have been recorded remotely even if there wasn’t a quarantine,” he says, so in that sense it isn’t informed by the pandemic. “But having something to focus on that kept me connected to old friends during a chaotic time made it a particularly meaningful experience.”

For Vassar, it’s all about Quarles’ ability as a producer to do what it takes to bring something to its maximum potential.

“He takes an idea I have, like a set of lyrics, or a basic song structure, and really lifts it to a new level, making my work sound better than I could’ve thought,” Vassar adds. “The end result is the reason to work with Joshua. The end result is always a gem.”

Going forward, Quarles can’t wait to hear what musicians are working on so he can figure out how the studio can support their projects while meeting their budgets. But it’s moving into doing production full time, that’s the biggest deal to him.

“I know that it’s truly what I love to do. So not having to divide time between studio work and another profession is definitely exciting.”