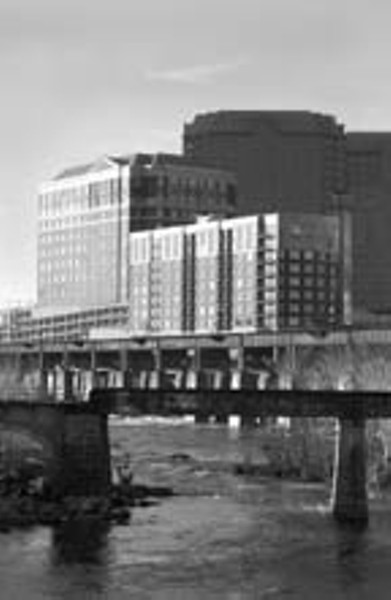 To be sure, 2005, like the year before, was the year of the condo, especially within city limits. According to the booster group Richmond Renaissance, more than 6,000 people, about 3 percent of the city's population, now live downtown.

If not because of an awesome new performing arts center, then why?

"Richmond just has a wonderful housing stock," says William Lucy, professor of urban and environmental planning at the University of Virginia. According to Lucy, Richmond, along with other cities that boast an abundance of historic architecture, hasn't seen much of an increase in traditional housing during the last few decades, creating pent-up demand that's fueling the condo boom.

The wave of construction traces back to the late '90s, after the state created the historic preservation tax credit program in 1997, which, coupled with existing federal tax credits, encouraged developers to restore historic properties into residential housing. Recall developer Robin Miller's 2002 renovation of Stuart Circle Hospital into One Monument Ave.? Today examples like it abound.

Most recently, projects such as the canal-towering Riverside on the James and the 77-unit Nolde Bakery Condominiums in Church Hill have garnered attention, top dollar and takers. They feature amenities including garage parking, exercise facilities and the latest hi-fi accoutrements. And they cost anywhere from $200,000 to more than $500,000.

Tom Tyler, an analyst with Integra Realty Resources-Richmond, credits the condominium boom with sustaining the city's thriving housing market through now-softening times. According to Integra Realty's most current data, the sale of new condos in the city jumped 124 percent in the last year, from 187 to 419 in the period from September 2004 to September 2005.

What's more, Tyler says, developers increasingly are turning to Richmond from places like Williamsburg and Northern Virginia, where there is a dearth of available space for multi-unit, for-sale projects. So don't look for a "devastating bubble bursting" in the 2006 condo market here, Tyler says. "Richmond is remaining somewhat strong." S