With their new majority, progressive Democrats call for swift action. How far they go depends on the governor who some people counted out.

Scott Elmquist At his party’s election-night triumph Nov. 5 in Richmond, Gov. Ralph Northam, with his wife, Pam, at his side, declares that Virginia has turned blue.

You can have more than one comeback.

That may have been accurate, or not, amplified because it was one of the few off-year gubernatorial elections. It happened in the midst of the great Washington upheaval, a Virginia story conveniently but perhaps only partially fitting a national story line.

After all, Virginia’s previous governor was a Democrat, and the commonwealth voted for President Barack Obama and candidate Hillary Clinton. The red had been turning purple for years, most noticeably in Northern Virginia.

Northam also was no poster child for progressives. He said he was more moderate and talked with The New York Times about twice voting for President George W. Bush.

“He’s a conservative enough Democrat that Republicans once tried to talk him into joining their party,” says Stephen Farnsworth, professor and director of the Center for Leadership and Media Studies at the University of Mary Washington.

That wasn’t the case for his further-left foil in the 2017 Democratic primary, Tom Perriello. The two men represented such different wings that The Atlantic called their race “A Fight for the Soul of the Democratic Party in Virginia.”

Still, Northam’s win was an illustration of the changes at play.

While the Virginia Senate wasn’t up for election, its Republican majority was slight. In the House of Delegates, which was in play that year, a coin flip in one race eventually determined the majority as Republican, 51-49.

But Democrats had flipped much more, taking 15 seats from Republicans.

Enthusiasm fueled the party’s election-night celebration at George Mason University in November 2017, kicked off by a triumphant Thomas Perez, chairman of the Democratic National Committee. “The Democratic Party is back, my friends,” he said. “We’re back big time.”

Things were off and running for Virginia Democrats — until a boulder dropped in their way 15 months later. That’s when Northam’s medical-school yearbook page came to light, in February, heading into an election season in which all seats in the General Assembly were at stake.

The yearbook page representing him included a photo of two men at a costume party, one in blackface. Was it Virginia’s governor? He said yes, and then no, and then held a widely panned news conference in which he acknowledged appearing in blackface at another event as a young man portraying Michael Jackson.

The end certainly was near.

Fellow Democrats called for his resignation. And the hits kept coming for the party — Lt. Gov. Justin Fairfax suddenly faced public accusations of sexual assault from two women, which he denied, and Attorney General Mark Herring acknowledged that he too had worn blackface as a University of Virginia student.

Northam apologized and receded from interviews and public appearances. He said he would embark on a listening tour and appointed the first cabinet-level position designed to address diversity and inclusion in state government hiring.

Northam made it clear that he was holding onto his seat. But as his party revved up for the November elections, he took a low-key approach in the campaigning.

When it all shook out, the public made its judgment about Northam, longtime political analyst Bob Holsworth says: “There was no price to be paid.”

Gov. Northam maintains his position as the leader of the Virginia Democrats, and his party was on the better side of that boulder — uphill, looking down. It captured the Senate and House of Delegates, giving it control over the General Assembly.

“We’re incredibly excited to have the trifecta,” says Susan Swecker, chairwoman of the Democratic Party of Virginia.

Pols and pontificators took stock of the news.

Was Northam’s post-scandal strategy effective? Did the electorate simply accept his apology and move on? Perhaps voters simply focused on their localities, not tying their candidates to the governor in the first place.

Did Republicans perform poorly? Was President Trump a factor? Or maybe there’s general acknowledgement that Virginia’s governor can’t run for re-election, so in two years the time is up anyway.

Swecker won’t waste time analyzing, at least for the public record, the politics of the February scandal. As for how the party might handle Fairfax’s troubles, “I can’t really speak to that,” she says, deferring to House and Senate leadership.

For her and the party, it’s more about moving forward with the majority at hand. “Governor Northam’s in a strong position right now and he’s been a good partner to us this year,” she says. “And he’s incredibly popular in Virginia.”

It’s tough to contradict that notion, says Rich Meagher, associate professor in the political science department at Randolph-Macon College. The election served as Northam’s “triumphant return from the wilderness,” he says.

It turned out that Northam just needed to hang on.

With the General Assembly session set convene in January with the first Democratic majority in decades, Northam is leading the agenda for legislation and shaping his first two-year budget that wasn’t inherited from a previous governor.

“I think he’s going to treat this session as his coming-out party,” Meagher says.

That’s the kind of vision that sends shudders down the spines of Republicans who worry that Virginia will be reshaped in unfathomable ways.

“When people really find out how hard the progressive wing of the Democratic party in the statehouse is pushing them to fulfill their goals,” Gilbert said, “it gets a little scary.”

Fright for some, ebullience for others.

Soon after the Democratic majority was secured, those progressive voices were electrified, singing loud and clear through the social-media fog: There should be no delay, no excuses, on the kinds of dramatic change Virginia Democrats have sought. 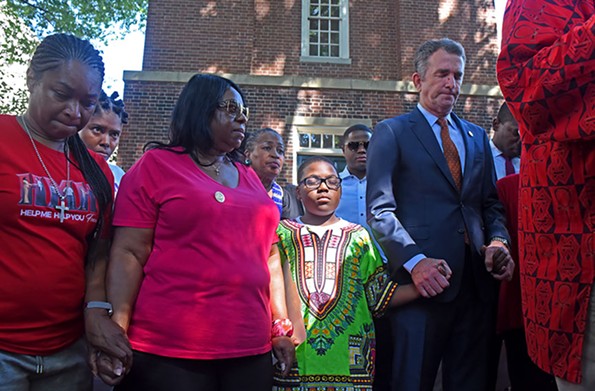 How the party strikes the balance between its moderate and progressive forces will be one of the themes of the legislative session and budget to come. It also will make clear whose influence is most felt, and whose power is most significant.

For now, the more moderate Northam is at the helm.

It’s the natural course of events, Meagher says. “Every party has a kind of problem with the moderates who are looking at compromise and caution, and the firebrands” who want to use a voter mandate to make bold changes.

With leadership positions to appoint, Democrats huddled in a closed-door meeting — with phones taken at the door, Swecker says, to quell tweets and maintain privacy. They chose Delegate Eileen Filler-Corn of Fairfax County as speaker of the House, setting aside other roles for more progressive candidates.

There also will be lines of power emerging along geographic areas, rural vs. urban, as well as generational, the establishment vs. newer members rising in the party. 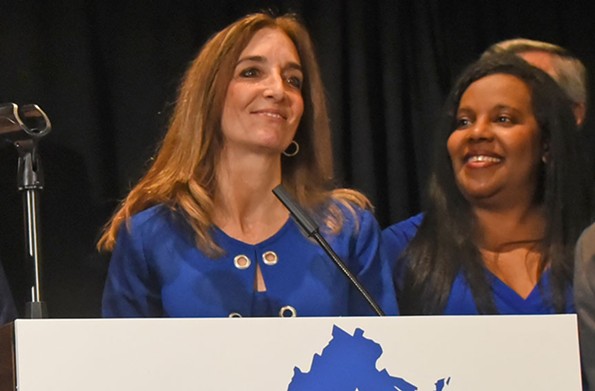 The party chairwoman, Swecker, notes the makeup of leadership along with the body at large as more diverse. “We have a General Assembly that looks more like the people of Virginia,” she says, which leads to wider perspectives and better legislation.

Until recently, he says, a lot of Democrats in Virginia succeeded by being progressive on social issues and moderate on business and economic issues. But in recent years, progressives have emerged stronger and “the consensus about what it means to be a Democrat has begun to fray.”

Another shift is that there’s a more powerful black caucus, Holsworth says, and that many of the new Democrats are women — “and they’re going to occupy a more important role than ever before in Virginia.”

That points to such legislation in the areas of gun safety, criminal justice reform, the minimum wage and the passage of the Equal Rights Amendment, he says.

Farnsworth says to look for areas of agreement that won’t cost much to the taxpayer, which allows the party to play down the labels of “tax and spend liberals.”

To do it, the leadership must align.

“You have the speaker designate, the majority leader designate in the Senate, the governor,” Farnsworth says. “All three keys are going to have to turn for the party to move forward. And so they’ll move most quickly on areas of common agreement.”

Sure enough, the governor rolled out his agenda swiftly, attempting to gather momentum and lay the groundwork for unity. 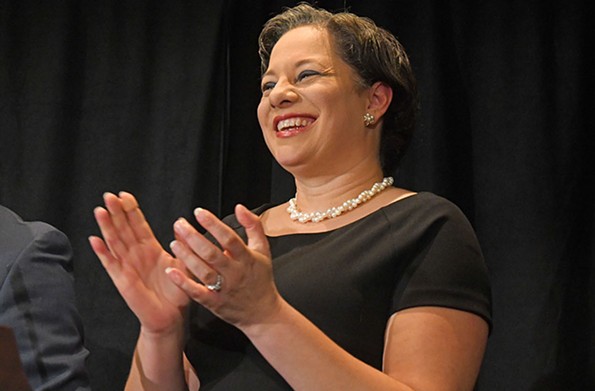 As for the kinds of “scary” stuff to which Gilbert refers, Farnsworth says it’s important to recognize that Northam “is not going to go along with a far-left governing agenda.”

But there will be tensions. “It’s always easier in the minority for a party to stick together,” he says. “For parties in control, that’s when the divisions become clearer.”

One of them will center on the regulation of Dominion Energy, a key contributor of the governor’s. There’s a generational divide among Democrats on accepting money from Dominion.

“Progressives weren’t dependent on the establishment for money,” Holsworth says of the elections.

Progressives may not be as visible as the governor, [Senator] Dick Saslaw of Northern Virginia or Filler-Corn. “But the progressives have come out, and have won elections for the Democrats,” Holsworth says. “And they weren’t dependent on any of the conventional sources of money.”

Also at stake is how the party might attempt to hold onto its power. Bipartisan legislation passed the General Assembly to pave the way for independent redistricting, a way to avoid gerrymandering issues.

“For me it’s the most important issue,” says Alex Keena, a political science professor who studies the issue at Virginia Commonwealth University. “I hope they will do the right thing.”

When Republicans were in control, Democrats agreed to independent redistricting. But that could be something they reconsider.

“If you look around the world at examples of politicians promising redistricting reform,” Keena says, “it’s so often the case that they don’t follow through.”

Thinking back to Northam’s position in February, and where he stands today, it’s a stunning turnaround — and perhaps a lesson in power and influence.

“I think that we’re in a time where scandal probably in general means less, or has less of an effect,” says Kyle Kondik, managing editor of Sabato’s Crystal Ball at the University of Virginia Center for Politics.

That may be because the stakes for both parties are so high, Kondik says: “It’s hard to convince people to vote against their own interest or their own side because someone from their side has problems.”

Also worth considering is Virginia’s one-term-at-a-time rule for governors, Keena says: “That might change how we’re talking about the Northam scandal. We might be looking at this in a different way.”

However you look at it, it’s another comeback for Northam — and the party.

The governor who was less visible during the campaign was front and center at the Hilton Hotel downtown Nov. 5, where Democrats gathered on election night.

Sen. Jennifer McClellan, who’s being watched as a potential gubernatorial candidate, handed the mic off to Northam, who congratulated the party faithful and declared that “Virginia is officially blue.”

Northam said the message was clear that voters wanted Democrats to continue their progress. “Tomorrow the work begins,” Northam said.

Correction: This story was updated to reflect that Dick Saslaw is a senator representing the 35th district.