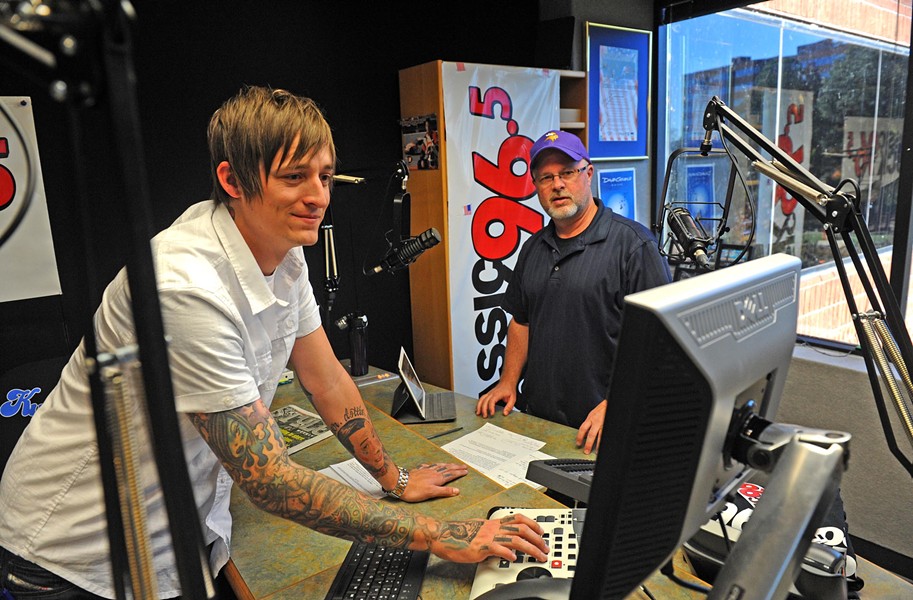 Scott Elmquist Co-hosts Mason and Sam Giles, in the second full week of their new morning show on Classic Rock 96.5, are part of the station’s strategy to emphasize local talent over syndicated shows.

"We're five fingers making a fist of doom," Sam Giles says after taking down a caller's address to send a free T-shirt. "It beats the hell out of working."

Giles and his co-host, Mason, are a newly paired duo at Classic Rock 96.5 WKLR-FM, pitching their status as hometown guys. Their target? Washington-based show "Elliot in the Morning," which airs in Richmond on cross-town rival XL102.

In launching "Sam and Mason in the Morning" on Nov. 8, the station made the rare move of bumping nationally syndicated programming, John Boy and Billy's "The Big Show," based in North Carolina, in favor of locally based talent.

Giles says it's working so far. A 13-year industry veteran, he seems to banter comfortably with Mason, who moved to Rock 96.5 this year after a public split from WRXL-FM. "We get along really well," says Giles, who also promises more music. "Richmond wanted more classic rock in the mornings, and we'll be your idiots."

Before the switch, seven of the 10 most-listened-to morning radio shows in Richmond featured hosts outside of the area, according to spring ratings figures provided by Nielsen Audio. Of listeners at least 12 years old who tuned in weekdays from 6-10, XL102's morning show was ranked No. 7. Classic Rock 96.5's was ranked No. 9.

While comments on Classic Rock 96.5's Facebook page reveal some listener dismay at "The Big Show" losing its slot, other listeners seem to appreciate that the new show can break up the classic rock with commentary on backyard happenings. On a recent Friday there was chatter about InLight Richmond and local college basketball.

Dave Symonds, operations manager at the Clear Channel-owned XL102, says he hasn't listened to the new competition. He counts himself among those missing "The Big Show."

"Maybe I shouldn't say this," Symonds says, "but I was a huge fan of John Boy and Billy and I kind of miss 'em."

On the other side of town, Mason says he's eager to see the show continue to grow its listener base: "The great thing is we just want to win."