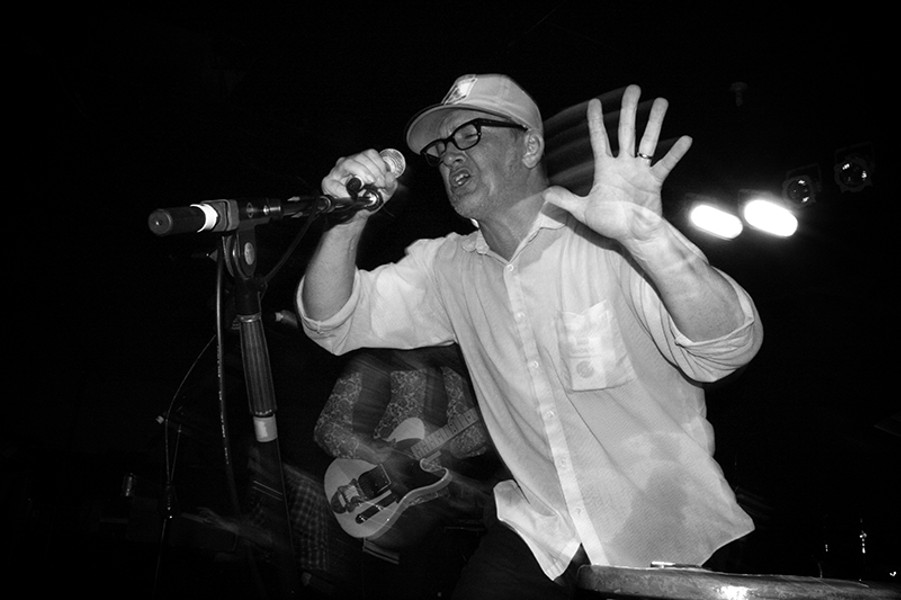 P.J. Sykes This image, similar to the one used for the cover of "Live at XX Merge" was taken by local photographer P.J. Sykes during a memorable Lambchop show five years ago in Chapel Hill, NC.

P.J. Sykes, a local photographer and musician (Hoax Hunters) known for his vibrant shots of RVA concerts, has been branching out with work appearing in national publications from Paste and Spin to Rolling Stone magazine.

Now a photo Sykes took from a Lambchop concert five years ago at Cat's Cradle in Chapel Hill has been chosen for the cover of "Live at XX Merge" -- an album documenting the acclaimed 20th anniversary concert celebrating the Durham-based Merge Records.

It's a highly kinetic black-and-white image that looks more like a fire-and-brimstone revival sermon than a rock concert.

Says Sykes about the photo:

"When I left for XX Merge I was really excited for a lot of the bands but had overlooked Lambchop. They just never caught my ear before. I got there early every day so I could be at the front of the stage to try and photograph each band. I was posting photos each morning for Paste magazine and RVAmag.

Lambchop's set was crafted in a way that built excitement and intensity. Each song was a little more uplifting than the last and by the time they played "Up With People" the feeling in the room was magical. Social media was still young but word of how amazing the set was started to flood the internet very rapidly. I remember looking around and people were in just disbelief at what we were watching. Then they played 'Give It (Once In a Lifetime)' and I knew as I took the photo that is now on the cover that I was apart of something truly rare. This set is hands down one of the best I've ever seen. I get goosebumps talking about it even five years later.

It's a real honor that my photos are being used for the artwork on this release."

"Five years ago, those of us lucky enough to be at Cat’s Cradle when Lambchop took the stage witnessed the performance that became Live at XX Merge, a concert film and album. We are now releasing this special album on clear vinyl with a full download of the audio and concert film for those who missed it or for those who want to relive the experience.

The limited-edition LP is available now for pre-order and will arrive in your mailbox on or around the September 9 release date. We will also have copies for sale at the Merge 25 merch table. (Note that pre-orders cannot be picked up at the festival.)"