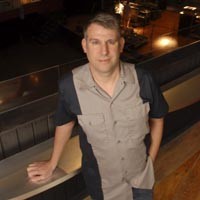 Here's a man who's struggled for the city. And, moreover, struggled with the city. In Jeff Sadler's five-year mission to establish Toad's Place, the Canal Walk music venue and "thing to do," he fought for permits and zoning against a tide of bureaucracy that had never seen anything quite like the concert hall.

As of March 5, shaking off the last of the red tape, the Toad's general manager will be moving on.

"It is one of those things that we talked about a while back," he says of his departure. "The plan has always been to leave at some point, or turn over day-to-day operations at some point."

Bearing no particular hint of irony, Sadler's going to work for the state, in Virginia's Department of Housing and Community Development. His new duties will be twofold: working on a Virginia "Main Street" urban planning program, and coordinating the Virginia Enterprise Initiative, a micro-lending program for small businesses.

Before the Toad's Place project brought him back to Richmond in October 2003, Sadler lived in Rocky Mount, working as executive director for a Main Street program there. Almost four years after his Richmond arrival, Toad's Place opened June 21 with a performance by the Squirrel Nut Zippers and a lot of soda. Two months later the club received its liquor license, just in time for George Thorogood.

At the time, Sadler felt the city was working against him. Now he allows that his and his associates inexperience compounded the difficulties.

"All in all, looking back on it, we were a bit of novices and the city wasn't as helpful as it could have been," he says. "Of course when you're in the mix of it you think it's everybody else's fault."

So why get out now, just when the club is getting the hang of things, pulling in artists such as Andrew Bird, Ween, Regina Spektor and Wu-Tang Clan -- and right when Richmond's other mid-sized venue, The National Theater, is opening?

"Is there ever really a good or bad time for moving?" answers Sadler, 39, getting all philosophical. "It's actually not a good time, he says. "It's something we've been working on since back in November."

Sadler says his love of music lured him to Toad's, not his love of running a music venue. "I really have no interest in being a bar manager," he says. "I don't have a lot of patience for a cook who doesn't show up."

Sadler says that Jack Reich, the booker for the original Toad's Place in New Haven, Conn., will continue to book acts for the Richmond venue, and that local staff members will be shuffled after his departure.

In one recent management shift, local promoter Vivian Oswald took over as director of marketing for the departing Amanda Vance.

"We've got a lot of really good staff that's underutilized and a lot of staff that's been stretched," Sadler says. He'll still be involved in the programming for a while, and somewhere in that mix another general manager may emerge.

"It's going to be hard to not comment on everything that's happened there," he says. "But anyway, gotta move on."

He's pleased with how things have turned out, he says: "Richmond was known as a weak live-music town and my theory was they weren't getting what they wanted and I think we proved that."

His last show is the Grace Potter & The Nocturnals double-bill with the Benevento Russo Duo. Potter is one Sadler fought to get, so it's one he plans to enjoy. "I'll probably end my tenure about the time she goes on stage so I can have a beer."