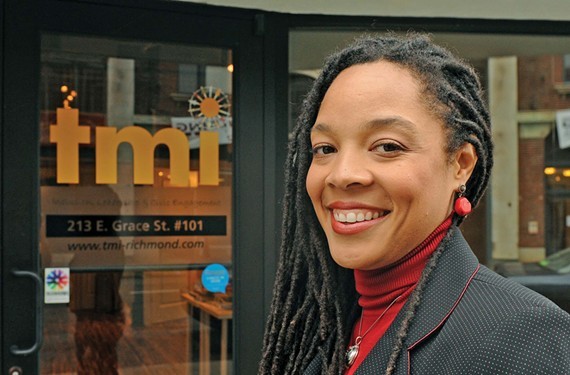 For Tiffany Jana, the election-season timing of her new book on overcoming bias couldn’t have been better. Even if the reason was disappointing to half the country.

Jana serves as chief executive and president of Richmond-based TMI Consulting, which specializes in diversity and inclusion management. She and her husband, Matthew Freeman -- a restaurant reviewer for Style -- launched their book, “Overcoming Bias: Building Authentic Relationships across Differences,” Nov. 1.

That means it came out a week before the country had a clear vote tally of its profound division. With Donald Trump and his transition team in the midst of cabinet appointments and filling jobs, a political strategy firm in D.C. has asked Jana to write a series of recommendations for the president-elect.

“It’s a very strange thing to have someone say we need you to make a set of recommendations for the president,” Jana says.

She notes that she still has some praying and discerning to do, but expects to be finished by the end of the week.

Some of the precepts of the couple’s book will “factor prominently,” she says. “There will be mentioning of things like taking time to listen and seeking out and cultivating environments that are inclusive of difference.”

They’re working to position the book’s authors as “thought leaders” in troubled times -- and are arranging for Jana’s work to get in front of Trump.

Jana says she’ll be treating Trump as if he was a client, recommending how to handle the bias that became a storyline of the campaign and tinges some of his administration picks. She says one of her friends with branding experience, Josh Epperson, advised her to play to Trump’s ego.

“He had an clever angle. It was more an approach to winning,” Jana says. “He noted that this guy is clearly into looking like he’s right all the time. So he suggested I frame it in a way, of, ‘Here’s how you can show everyone you’re right.’ I think that’s a brilliant strategy. The more it plays to his ego, the more likely he is to take it in.”

As for the release of their book during the last week of the election, she says she didn’t time it like this on purpose. “I did not have a crystal ball,” she says, laughing. “I was imagining a completely different outcome.”

The book got an immediate shout-out blurb from Sen. Tim Kaine, who wrote that the authors “take a tough issue that almost immediately raises everyone’s defenses and break it down in simple and practical ways.”

Jana, a former Style Weekly Top 40 Under 40 recipient, was recently named as co-chairwoman of the transition committee for Richmond Mayor-elect Levar Stoney, which she calls an extreme honor.

“It means the world to have Richmond asking for our expertise,” she says. “I was just in New York and Spain working, and it’s just awesome to be able to help out my city.”

Jana’s book launch at Chop Suey Books in Carytown was so popular that it sold out, and she says elsewhere the book has been taking off. That hasn’t necessarily translated to more business for TMI Consulting.

“I never positioned TMI as the Olivia Pope of Richmond,” she says, referring to the fictional black television character from “Scandal.”

She’s had conversations with local business owners facing social-media backlash from ill-conceived comments on race, she says: “But I don’t know if that’s the direction I want to go yet. I’m still figuring that out.”

Jana also has a webcast scheduled for Dec. 7, through the American Management Association. The book is available on Kindle and Audible, with Jana reading the text.

“I’ve been overwhelmingly surprised by how receptive people are to the book,” she adds before boarding a plane. “When people pick up the book and read it, they’re owning the fact that they might have bias. That takes courage.”

“We now have a situation where no one in this country can pretend this divide doesn’t exist. But good people on both sides say they don’t know where to begin. This book really does give people that opportunity and that makes me so happy.”