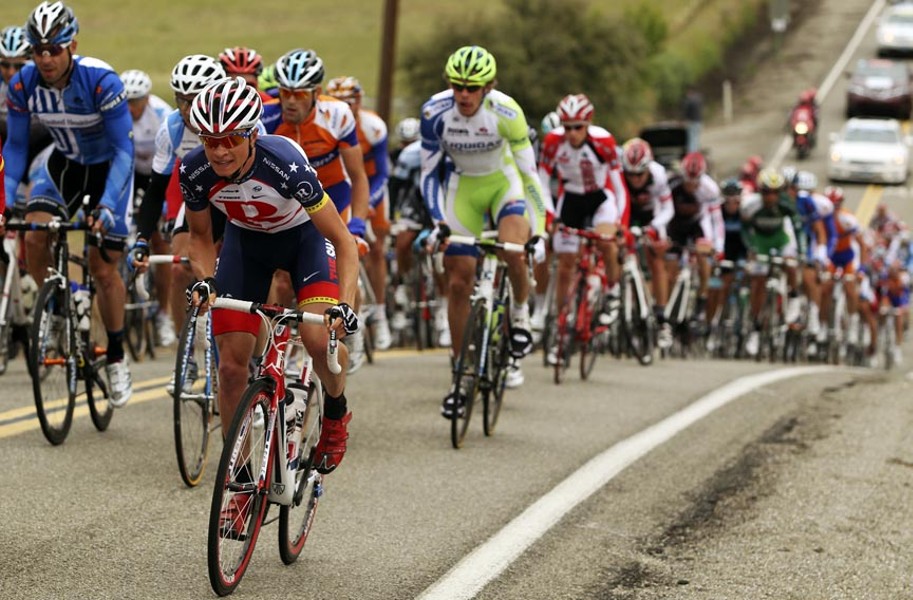 Reuters/Anthony Bolante Central Virginia native Ben King, who’s competing for the United States in the UCI Road World Championships, will be cheered on by his family of athletes during the Men’s Elite Road Circuit on Sunday.

Ben King was reared to be a world champion cyclist. But it also seems to be in the genes.

His father, Mark King, is a category-two racer, a 54-year-old who’s ridden in such events as the Tour of Mexico and frequently trains with Ben’s uncle, Dan, a category-one racer. Ben’s 20-year-old brother, Jake, rides domestically for the semipro California Giant Cycling team, and has raced internationally as far away as the Czech Republic. Ben’s mother, Christine, and his two sisters, Hannah and Sarah, are avid runners.

Good lungs and legs all around.

“If we weren’t on a bike, we would be going on hikes,” Ben says. “We have never been the kind of family that just plays board games. We are too competitive for that.”

But hopefully the Kings can sit still long enough to watch Ben compete in the 162.4-mile men’s elite road circuit on Sept. 27, the finale to the UCI Road World Championships. As a Virginia native, Ben’s likely to have plenty of other supporters cheering him on too.

Born in Richmond, Ben grew up in Charlottesville, where the rolling hills joined by steep climbs made the mountain town a perfect place for the sport. “[It’s] one of the best places in the world for training,” he says, “those quiet country roads with so much variety.”

Ben got the home advantage on those country roads during Team USA’s pre-event training camp, based in Charlottesville last week. He was mostly resting and catching up with family after returning to town from the Tour of Spain, one of the biggest cycling races in the world, which ended Sept. 13.

Before he could dream of competing back-to-back in two of the most prominent events in cycling, Ben rode in his first race at age 13. It was a trail race, but he wanted to try road racing after watching his father. Now at 26, he’s a three-time national champion in the Men’s Under-23 division, has placed first in the National Road Race Championships and has competed in the Tour de France.

Jake also joined the family fun as an adolescent. With the younger Kings on board, Dan recalls family vacations filled with indoor pools, continental breakfasts, and of course, bikes. “Guilt-free race weekend is what we used to call it,” he says.

The sport has bonded the men, keeping them close in touch despite the elder Kings’ business careers, Jake’s studies and full-time job and Ben’s world travels.

“Those three guys are best friends today,” his dad says. “That is pretty awesome to say about your kids and your brother.”

Ben began to seriously compete in the sport at 16, winning two jerseys in one weekend and a national championship at 18. “A lot of riders will peak in their early 20s,” his dad says, “but Ben just keeps getting better and better.”

Mark King cautioned his son against getting a big head.

“Hey dad, I ride a bicycle,” he answered.

“That really put it into perspective,” his dad says.

Jake has chosen a quieter path. He still races, but not internationally, and juggles the sport with a full-time job and school. Ben has made cycling into his career, and travels so frequently that he owns houses in Charlottesville and Luca, Italy.

As for their racing styles, Ben is true and steady while Jake bolts.

“Ben is like a big diesel, Jake is a lot quicker,” their dad says. “He is a lot more fast twitch.”

What could that mean for Ben’s chances in the men’s elite road circuit?

“He is definitely a long breakaway guy, he is not a sprinter. He is a motor,” his uncle says. “If he can get lucky enough to get the breakaway that will be the shot. The longer the breakaway, the longer and harder the race, the better Ben is.” S


Editor's Note: This story reflects a correction to the print version that referred to Ben King as three-time world, not four-time national champion.