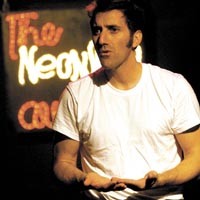 Slash Coleman has carried his one-man show, “The Neon Man and Me,” all over Richmond, overseas and across the nation thrice, raising more than $50,000 for nonprofit organizations, and earning Coleman the Groucho award for best one-man show. And now his act — a circus of 13-year-old girls, rusty old Southerners and perverted Frenchmen — has finally made the leap to TV.

The Community Idea Stations will begin airing recordings of his show on WCVE and other PBS affiliates throughout the second half of November.

“I've been on stage since I was 13 years old as a musician but not as a theater person,” Coleman says. “I think that's an advantage I have because I create shows for people who normally don't go to the theater.”
“The Neon Man and Me” airs Nov. 20 at 1 a.m. and other times.

Meanwhile, the Virginia Historical Society worked with WCVE PBS to produce “Witness to a Century,” a one-hour documentary that features testimonies from Virginia centenarians on living through the radical changes within the past 100 years.

“I think it reaches even beyond Virginia because it really does affect everybody,” says Lynne McCarthy-Jones of the Community Idea Stations.

“Witness to a Century” airs throughout November and December. Check listings for both shows.