by Mike Rutz and Jay Smack 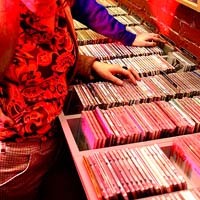 In addition to a new EP entitled “Brittle Branches,” Richmond cut 'n' paste rockers Ki:Theory has been busy with remixes and soundtracks. In the last 12 months, Ki:Theory has remixed Ladytron, UNKLE, and Queens of the Stone Age. The band's  remix of the Brazilian Girls' “Good Time” was released as an iTunes exclusive. Now the group is scoring the theme music for a new television show, “Juvies,” and has tracks featured in North Face's rock-climbing film “The Sharp End,” Teton Gravity Research's ski and snowboarding film “Under the Influence,” and the upcoming 20th anniversary edition of the Golden Tee arcade golf game. Ki:Theory's first headline gig in quite a while is Saturday, Dec. 6, at Gallery5, with special guests Autocue and DJ Cambot (Cam DiNunzio from Denali).

After more than a year of recording and substantial line-up changes (half the band survived and has been augmented by new members), indie rockers Cinemasophia are proud to announce the completion of their album “Fits & Cycles” as well as a new round of shows leading up to its release on Little Black Cloud early next year. The album was recorded and mixed by John Morand at Sound of Music with additional parts added in apartments in Brooklyn, N.Y., and Richmond from April 2007 through July 2008.

No band illustrates the unity of Richmond's art and music scenes better than the surf-punk band Stink Eyes. Deadpan vocals are provided by James “Barf” Callahan, who, among many other artistic endeavors, has designed stuff for Municipal Waste, Cannabis Corpse and Microjoy. Manning the guitar is Adam Juresko, who's done artwork for Wow, Owls, Cloak/Dagger, and his former band Stop It! Look for Stink Eyes, also boasting members from Tigershark and Pink Razors, at a show near you.

Local label Rorschach Records braces for the release of two hardcore offerings. Brainworms' new 10-song full-length, “Brainworms II: Swear to Me,” is scheduled to come out in January. It was recorded to analog tape in Philly at Permanent Hearing Damage by Steve Roche, who's also worked with Pink Razors. If you can't wait for that, Rorschach has just released a new seven-inch and CD by Snack Truck called “Spacial Findings,” recorded at the Recorditorium. Snack Truck is at Viking Studios working on a new full-length and reports that there's enough material for a double LP.

Tim Barry, frontman for Richmond punk archetypes Avail, has just released his second solo album on Suburban Home Records. “Manchester,” recorded by Lance Koehler at Minimum Wage Recording, features some regulars — most notably Josh Small and Caitlin Barry, as well as Josh Bearman of Special Ed and the Shortbus on bass. Barry continues his stripped-down formula, although there's a nod to Avail with an acoustic version of “November.”
Speaking of Special Ed and the Shortbus, check out December's Inside Track for some gigantic news on the band!