Forget the cloying Shirley Temples foisted on unsuspecting children. Long overdue for a makeover, mocktails have arrived, embracing the farm-to-table movement as they find their place on libation menus. Having long ago earned a dodgy reputation for being saccharine sweet and ridiculously one-note, mocktails are showing up at bars with as much creativity and nuance as their boozy brethren.

"The same things that make a great cocktail make a great mocktail: complexity of flavor, layering of flavors and simplicity," Nota Bene bar manager Danny McDermott says. "I ask questions about a person's taste preferences and build off the flavor profiles they're looking for."

To that end, he employs small-batch vinegars, syrups, infusions and bitters rather than routinely beginning with citrus, a frequent default in alcohol-free drinks. Of fashioning a faux mai tai, McDermott says, "You'd think it would be hard to do, but it comes out really neat. I use two different vinegars instead of two rums, building complexity and a balance of flavors. Without alcohol, we're forced to be more creative." 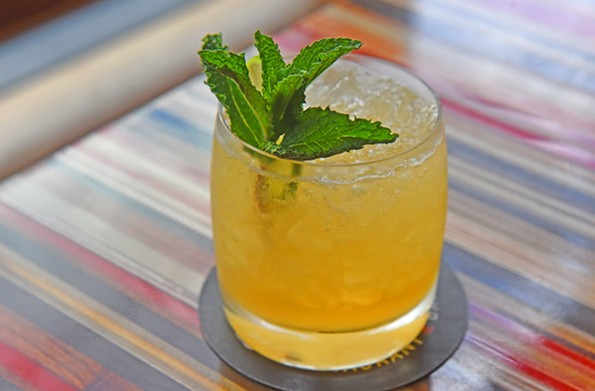 It's not just pregnant women and designated drivers eschewing booze anymore, either. Dry January puts a lot of drinkers in a holding pattern, with Lent close behind, but sometimes it's as simple as a short-term choice. Alcohol often loses its appeal after a day of brewery-, cidery- or winery-hopping, not to mention diet acolytes and people simply cutting back as part of a more mindful lifestyle.

But with mocktails, even nonimbibers can participate in the bar experience, including a ringside seat watching a creation process every bit as appealing as that of craft cocktail-making.

"It's nice to denormalize alcohol as the default when you go out," says Tessa Nin, bar manager at Secco. "When people order a club soda and lime, I offer to make them something more fun to make their bar experience better. Why come to a bar and have something you can have anywhere?"

Nin puts two mocktails on each seasonal drink list, but she's just as happy to have a customer throw adjectives at her to create something new and interesting based on their individual flavor preferences. Her booze-free nightcaps are favorites with some regulars.

"It has some nice dried and dusty notes from the rose hips and tea and some bright zesty-tart notes from the citrus elements," Nin explains. "I also use a touch of caster sugar for a little texture and serve it up in a coupe with a dusting of dried hibiscus petals."

Seeking the complexity and crispness of a cocktail or glass of wine, bartenders use a range of ingredients including herbs and fresh spices to balance out contrasting flavors in the glass. Shrubs made with fruit and vinegar make excellent food pairings, while adding something floral lends an exotic note, vanilla suggests a creamy characteristic and egg whites deliver a silky, foamy quality that adds richness.

Bitters offer a refined flavor, making them invaluable in mocktail-making. Like vanilla extract, they do have some alcohol, but they're used in incremental amounts such as drops and dashes. When people are open to it, Nin likes to use bitters because the alcohol amount is negligible while the flavor contribution sizable.

Now that Richmond is improving its mocktail game, the next frontier is mocktail pairings. Thomas Keller's Per Se has been doing it for more than a decade, and New York's Atera and Agern, as well as Nashville's Catbird Seat, all offer course-by-course, booze-free drink pairings. McDermott says the same pairing rules apply — do you want to cut through the dish's fat or encompass its roundness with a drink? — so, it's more a matter of bolstering a restaurant's mocktail repertoire to better complement a variety of dishes.

The same quality of ingredients populates mocktails as cocktails, for the obvious reason that it's the only way to capture those classic cocktail flavors. Still, the movement continues to fight the same image battle that vegetarianism once did: How can it taste good if it doesn't have anything bad for me in it? The experts say that's flawed thinking.

"When you drink a well-made mocktail, it doesn't taste like it's lacking anything," Nin says. "It's been composed to be exactly what it is. It's about developing expectations. Drinks don't need alcohol to be delicious." S