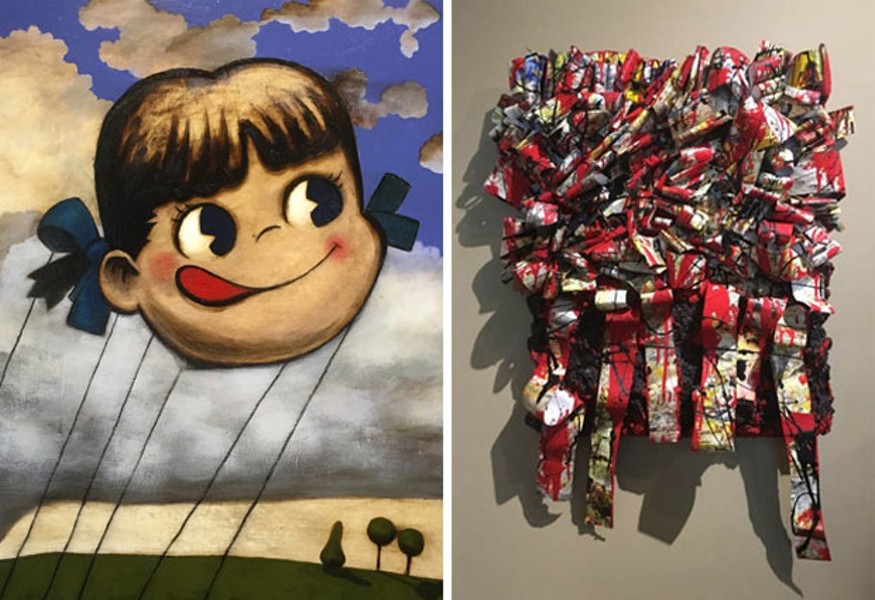 The songs, by Marcy Playground, Soft Cell and Devo respectively, are only three of 30 popular songs that will make the leap from audio to visual at Glave Kocen Gallery’s latest show, “One Hit Wonders.”

Acknowledging that many artists work to music because it helps calm and focus the noise in the brain, gallery owner B.J. Kocen, a longtime musician, sees music as a conduit that helps artists lock into their process.

“I guess I was curious what would happen if the background music became the foreground,” he says.

To find out, he cultivated a list of one-hit wonders — all of which will be playing as a soundtrack to the exhibit — and invited 30 artists to choose a song and create a work based on it.

“I’ve heard a lot of artists don’t like to participate in themed exhibits, but this idea just seemed so ripe for fun,” Kocen says. “It seemed like most of the participants got swept up in pushing themselves and their process in new directions.”

Painter Diego Sanchez, who usually listens to oldies when in his studio, chose 1972’s “Stuck in the Middle with You” by Stealers Wheel. He loves the understated sarcasm of the song, he says.

“It’s about wondering what to do or where to go and trying to make sense of things when nothing makes sense at all,” Sanchez says. He particularly relished the challenge to try something new without knowing whether it would work.

“Being stuck is very common for creative individuals,” he says. “It’s part of the process and the struggle that we go through to create.”

For Nico Cathcart, the lyrics of Modern English’s “Melt with You” resonated. She recalls the song, a staple of ’80s radio, as an accurate description of how it feels to be with someone you’re in love with to the point when the rest of the world disappears.

She interpreted it using barn owls — although they’re typically solitary birds, once owls find their mates, they mate for life.

“I can identify with the strong pull of someone — or some bird — who was built for you,” she says. “Pairs of barn owls are often seen cuddling and are known to mate for affection when not in breeding season — a rarity for birds.” She was intrigued by the show’s concept and the challenge of interpreting a pop culture phenomenon and keeping it distinctly in her own voice.

The unlikeliest song to make the list is Francis Scott Key’s “Star Spangled Banner.” The artist who chose it, Josh George, usually goes out of his way to avoid politics in his art. But the song, he thought, felt like the ultimate one-hit wonder.

“Can you think of any other song that Francis wrote?” he says. “It’s been controversial lately with the lyrics. Francis had a narrow vision on freedom and equality. This country itself feels like a one-hit wonder.”

To interpret it, he turned to one of his favorite touchstones, the urban landscape. “Let it represent what is actually happening,” George says. The city he depicts appears to go on forever into the distance.

“I collage in my work and started with this country’s flag,” he says. “I ripped them up and re-purposed them to make something new. It gave me pleasure to destroy in order to create. It is not the same as flag burning. Those flags disappear into dust. The flags I use transform to make something better.”

Kocen admits that his musical snobbery gave way to a more inclusive song list for the show once he conceded that any sort of best-of list is inevitably debatable.

“My new parameter became [that] if it’s on a list somewhere then it counts,” he says. “We’ll let the gallery’s patrons hash it out as part of the dialogue of the exhibit.” S