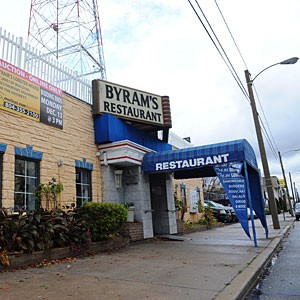 Byram's Lobster House owner Konstantinos “Gus” Nikiforos will appear in court April 7 on felony charges of property damage and threatening to blow up a neighboring building.

The owner of Byram's Lobster House, Konstantinos “Gus” Nikiforos, was indicted on felony charges last month of threatening to blow up a neighboring building in the 3200 block of West Broad Street and property damage. The building's owner, Robert P. Wood Jr., tells Style Weekly that Nikiforos did much more. Nikiforos told Wood he was waging war, Wood says, and threatened to kill him.

On Dec. 15, Nikiforos waived his right to a jury trial in Richmond Circuit Court, and a bench trial has been set for April 7. Nikiforos' lawyer, Delegate G. Manoli Loupassi, as well as assistant commonwealth's attorney Julie McConnell, decline to discuss the case. Nikiforos declines to comment when contacted by a Style reporter.

Wood, who owns and manages the building next to Byram's, says the alleged property damage and threats weren't isolated incidents. Nikiforos damaged his property with a powerful caustic substance that's commonly used as a degreaser, Wood says, inflicting upward of $40,000 in damages. Wood also says a bucket of urine was dumped down the carpeted back entrance.

Nikiforos was angry about a lost business deal, Wood says. The Byram's owner was trying to sell his business and building to Dionna Kelleher, owner of McLeans Restaurant. But after further examining the property, Kelleher opted out and decided to move into Wood's building next door. Wood says Nikiforos had warned him not to sell, telling him that there were investors interested in purchasing both of their properties for millions of dollars in order to build a parking structure and a diner. Wood says Nikiforos told him: “Don't do anything stupid.”

Wood says he received a phone call on June 3 from an angry Nikiforos, who said he was now waging “World War III.” Minutes later Nikiforos told one of Wood's tenants, Michael Duke, owner of the Victorian Fireplace Shop, that the conflict was even bigger — “World War IV” — Wood says.

Sometime between the time the employees of Victorian Fireplace Shop went home on Friday, June 4, and returned the following Monday, a caustic material had been dumped on the brass plates of two doors and door knobs, the iron gates around the back entrance and the carpet, inflicting extensive damage.

A few days later, Nikiforos approached Wood in the parking lot, Wood tells Style. Wood says Nikiforos told him: “I'll kill you, I'll destroy you. I'll bomb the building. Do you have any idea who you're fucking with?”

Wood's building was damaged again on July 12, he says. The front of the building was hit with the caustic substance, marring the front doors and a garage door with windows.

Wood then hired a private investigator and set up security cameras. Wood says footage from the cameras shows Nikiforos dumping liquid on his building, which led to the felony property damage charge against Nikiforos from an incident on July 22. Nikiforos also faces a misdemeanor charge of property damage.

The building had to be specially cleaned after an employee of Victorian Fireplace Shop burned her hand on a doorknob.