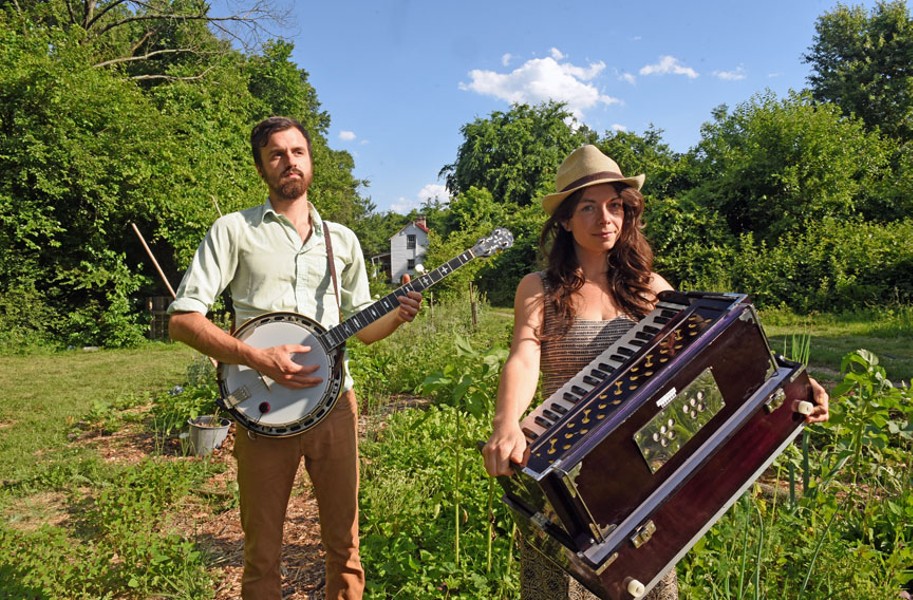 Scott Elmquist Jameson Price and Laney Sullivan are known not only for their hypnotic and lovely music outlet, Lobo Marino, but also their environmental activism.

Laney Sullivan and Jameson Price are members of the folk act Lobo Marino, but you might call them sonic tour guides for planet Earth. They like their string instruments sunny and their drums thunderous. Their lyrics tell of forests and floods, cities and countryside. It’s not hard to imagine why such music is beloved by punks and yogis alike— wanderers of the world, unite.

What’s interesting about Lobo Marino’s new concept album, though, is that it’s also intensely rooted in Richmond. “The Mulberry House” finds Sullivan and Price musing on their South Side home built during the Revolutionary War. Wild mulberries that grow around the yard and beckon them with an air of abundance, they say. But the estate also came with a box of documents belonging to previous owners. As Sullivan and Price shift through them, Richmond can be seen evolving through the ages. “Mulberry House” treks through this local landscape, warts and all.

“I think, ironically, we’ve always done concept albums,” says Price, stroking his beard. “This band is our vehicle for processing everything we go through.”

“A lot of our lyrics take the form of mantras, which are sacred utterances in, say, Hinduism,” Sullivan adds. “When we’re writing, we wonder what the world needs.”

On the chant-heavy tune “Honeysuckle, Bittersweet,” Lobo Marino uses invasive plants as metaphor of a mind overgrown with tangled emotions. “It’s dark beneath, turn up the soil now, let it breathe,” they sing. As if illustrating this song, Sullivan and Price dig through their box of inherited ephemera on a rainy Wednesday afternoon.

Sullivan pulls out a document, written by a black man, calling for equal rights. Price recovers tiny black-and-white photographs of previous residents, along with their loan papers from the Central National Bank downtown. Years pass through the papers and a picture develops of a quirkier, yet more egalitarian, Richmond.

“This album, like this space, is the culmination of the band’s vision to create anthems for the community,” Sullivan says, folding a crinkled document.

Fans may detect a shift towards structured sound on “Mulberry House.” Sullivan’s reverb-drenched vocals are in the foreground — and plaintive — but catchy guitar hooks create a pop backdrop. Fans of Neko Case, Fleet Foxes and Mazzy Star would feel comfortable here. So it’s surprising to hear that Lobo Marino hasn’t signed to a sizable independent label yet.

“They’ve [been] an integral part in my development as a performer,” says local indie darling Lucy Dacus, who recently signed to Matador Records. “Most of my first shows were opening for them. I’m grateful for their ethos and efforts to cultivate a conscious creative community in Richmond and beyond.”

Sullivan and Price don’t seem anxious to go viral. Like the restoration of their white, two-story clapboard home, they want to take things slow.

“People discover us through their friends, and nothing beats the magic of discovery,” Price says. “We’ve kind of figured out our own economy.”

Lobo Marino is pushing the album themselves, in various formats — cassette tape, CD and digital download. By encouraging fans to post community reviews to social media, the band is circumventing typical review channels such as Yelp, Amazon and even Pitchfork. Handmade touches, such as album artwork produced from vintage mulberry prints, add to the aura of authenticity.

Sullivan and Price certainly know their way around alternative economies. They lived in Chile for five years, working on organic farms. They’ve also been known to spend 300 days a year in a tour van. The galloping beats on “Mulberry House,” reminiscent of Indian talas, show that this wanderlust hasn’t faded. Several instruments, including an Appalachian dulcitar and an African kalimba, bring the world to Richmond’s front door.

“I tuned the kalimba tines in pairs, so I could tap out a melody,” says Price, demonstrating on the small, pianolike instrument.

The road is calling, and Lobo Marino will be hitting the summer festival circuit soon. Now that it has a homestead, the two say leaving isn’t so easy. But like the album’s opening line says, the time has come to celebrate.

“We’ve slept in barns, in all sorts of communal living situations,” Sullivan says, helping herself to another handful of backyard mulberries. “We’re ready for it.” S

Lobo Marino will perform with Gull and Wes Swing at Gallery 5 on June 9, at 8 p.m. Tickets cost $5 online or $6 at the door.